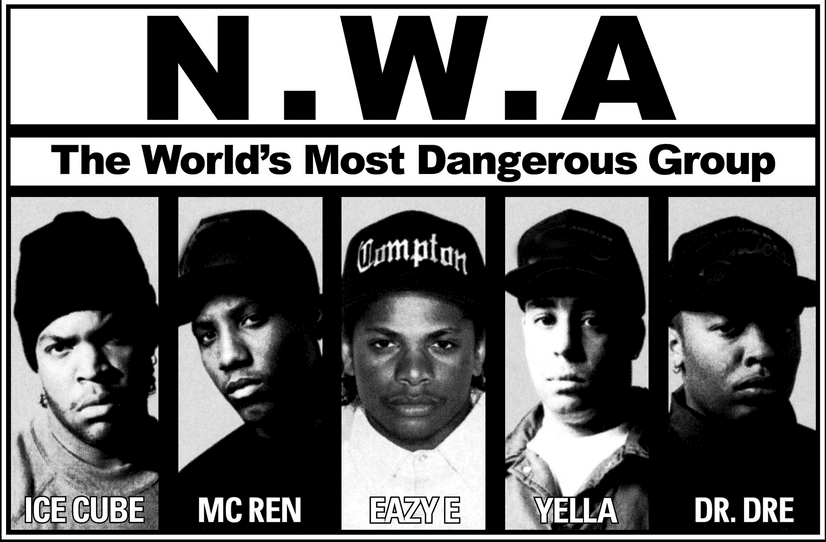 Earlier tonight I attended an advance screening of “Straight Outta Compton,” the NWA biopic that chronicles the rise and (sorta) fall of one of the most important groups in the history of hip-hop. And the film was, in many ways, terrific. And emboldening. And inspiring.

In case you’re not a rap person, NWA stands for “Niggaz with Attitudes”, and was a five-man group starring Eric (Eazy-E) Wright, Andre (Dr. Dre) Young, O’Shea (Ice Cube) Jackson, Lorenzo (MC Ren) Patterson and Antoine (DJ Yella) Carraby. Back in the late-1980s/early-1990s, NWA pioneered gangsta rap, taking the frustrations of being young and black and in the hood (in NWA’s case, Compton) and placing those emotions into music. And much of the work was friggin’ awesome. Fuck the Police trails only Public Enemy’s Fight the Power as rallying cry hip-hop anthem, Straight Outta Compton is electric and Express Yourself remains an all-time favorite. A big joy of this film was zipping back in time and remembering that, not all that long ago, rap lyrics carried oodles of social importance. NWA (and Ice Cube’s words, in particular) gave voice to millions of frustrated minorities. It wasn’t about having fun and making money. It was about justice. Power. Respect.

So, in that regard, the film is a gift, in that it vividly brings forth emotions that, over time, have become numb. I hear Drake or Kendrick Lamar, I tap my hands and rap along. I hear NWA, I feel like punching my fist through a glass window. Which is funny, because I’m a white guy from rural America who never much worried about being cuffed for no reason by the police.

The strength of “Straight Outta Compton” comes in the story of the rise; of five fed-up young black men taking their anger to a microphone. But it also comes in the acting. Which is surprising, because the thespians portraying the rappers are largely unknown. The star of the film is Jason Mitchell, who brings the late Eazy-E to life with an intensity and vibrancy that truly has you thinking you’re watching the real man. Mitchell’s IMDB page is largely vacant (in 2013 he played “Cast Friend #1” in “Broken City”), as is that of Corey Hawkins, a dead ringer for Dr. Dre and O’Shea Jackson, Jr.—who plays his dad with precision and smarts. But, here, experience doesn’t seem to matter. It’s a willingness to surrender to the time period, to the attitudes, to the music. Which everyone does.

That being said, there’s a flaw to “Straight Outta Compton,” and it’s a big one. Namely, after the first 45 minutes or so, the flick gets sorta, well, boring. Which is weird, because NWA was anything but boring. The film, though, starts feeling like one of those old VH1 “Behind the Musics.” There are parties with half-naked women. There are disagreements and falling outs. There’s Suge Knight, pistol whipping someone with a gun. There’s Snoop! And Tupac! Rapping! It all just starts meandering, an effort (seemingly) to squeeze every last minute out of a narrative that—organically—is so profound it needs no squeezing.

But, alas, I’m kicking puppies. By the time Eazy-E dies of AIDS, there were very few dry eyes in the theater.

Mine were moist as well. Not, however, because of the rapper’s death.

Nope, I was sad for the death of hip-hop at its finest.