As I’ve noted in this space before, I have a problem with hearing a lyric, or watching a movie, or reading a book, and obsessing over it. There might be an actor, and he catches my eye for some reason, and I Google, then Google more and more and more. Hell, that’s sort of how the Quaz Q&As started. We were watching a bunch of Wonder Years episodes. I wondered what ever become of some of Kevin Arnold’s girlfriends. I found Wendy Hagen. On and on and on.

The lyrics are Tupac at his best. They depict an alternative afterlife for gangsters, replete with mansions and swimming pools and tons of famous people. Here, take a look … 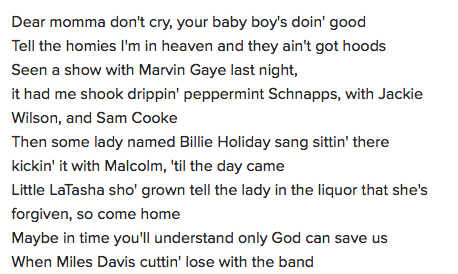 This is sort of a rambling post, but I really wanted to reach the Latasha part. Back in 1991, Latsha Harlins was a 15-year-old African-American girl in South Central Los Angeles. On March 16, she entered a store, Empire Liquors, to buy some orange juice. To quote the entry on Wikipedia, “[The store attendant] observed Harlins putting a bottle of orange juice in her backpack. Police say that [the woman] erroneously concluded Harlins was attempting to steal, and evidently did not see the money Harlins held in her hand.” And also: “[The clerk] grabbed Harlins by the sweater and snatched her backpack. Harlins then struck her with her fist three times, knocking her to the ground. After Harlins backed away … [The clerk] reached under the counter to retrieve a handgun, then fired at Harlins from behind at a distance of about three feet (one meter) and shot her in the back of her head, killing her instantly.”

The employee wound up getting off, and Tupac made multiple references to Latasha in his music.