I hate my iPhone 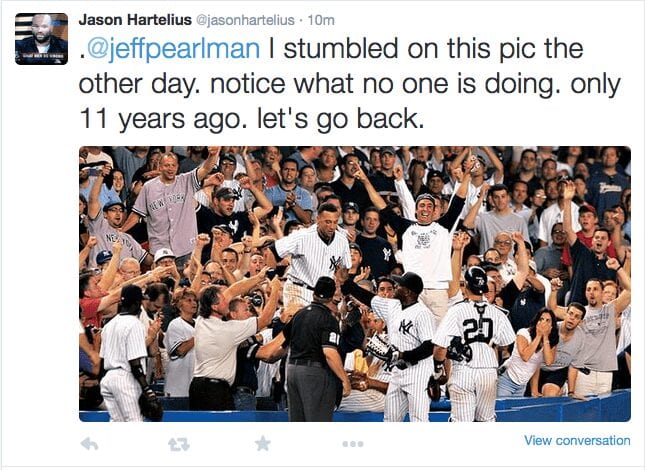 I have an iPhone.

I use my iPhone.

I hate my iPhone.

I wish we all hated our iPhones. And collectively tossed them in the ocean. Actually, wait. That would not be environmentally friendly. How about we simply take our iPhones, remove the batteries and build a giant wall. It could be a tourist attraction—THE GREAT WALL OF SELF-INDULGENCE. All proceeds will go to charity; maybe a recovery home for people learning to live without their iPhones.

Earlier today I Tweeted (from my iPhone, ironically), this …

I received a couple of Amens and You Preach, but the best reply came from Jason Hartelius, an NFL Network guy who sent the Tweet that tops this entry. The photo is the aftermath of Derek Jeter’s breathtaking Yankee Stadium dive into the bleachers. And Jason’s dead on—look at the people surrounding him. Smiles. Fist pumps. Attentiveness.

We’ve lost our attentiveness, and it’s a disease run amok. Instead of being in the moment, we’re all about proving we were at the moment. Which is beyond disjointed, because, in the action of using our iPhone to show we were at the moment, we miss the damn moment. Think about it—if all those people had iPhones, they’d be watching Jeter through a tiny screen, not as a live, full-color, living, breathing, three-dimensional entity. We are eliminating a dimension of sight in order to catch something we’re no longer seeing. We’re excited to prove, “I was there when …” and we’re no longer there. It’s craziness.

Admittedly, there’s no solution. We’ve become diseased, but there’s no escape. The second Steve Jobs movie will be coming out shortly, and he’ll be hailed once again as this hero of the world.

PrevPreviousSean McEvoy
NextJason Chaffetz and all that’s wrong with governmentNext