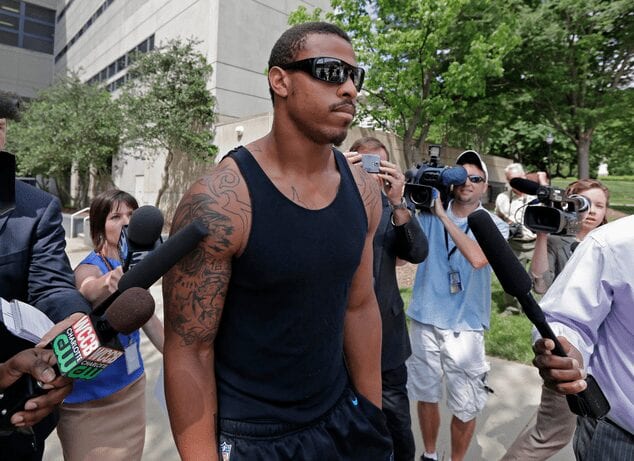 Zack Levine is a physical geographer and standup comedian from Greensboro, N.C. who offers his take on Greg Hardy below. You can see him all over North Carolina and on his website,  and reach him at comedyzack1@gmail.com.

I have kept up with the Greg Hardy case since it was reported that he beat his then-fiancé, Nicole Holder, was suspended for a year, convicted, acquitted on appeal, suspended 10 games for 2015, reduced to four games, and had the charge expunged from his record.

Diana Moskovitz from Deadspin is correct: Hardy has a multimillion dollar contract with the NFL because he’s a dominant playmaker. He also has his contract because no one in the public has seen these photos. The NFL saw them and made their decisions, likely thinking one of two things: the photos would never come out; or people wouldn’t pay attention when they did.

But Hardy has made it easy for people to pay attention because of his lack of remorse, violent sideline behavior, and sexist comments about other NFL players’ wives and families.

Hardy portrayed himself as a victim, and Holder threw out the “I fell down some stairs” line, and the cycle of domestic violence continues, in general and also, most likely, with Hardy. People like Hardy don’t change and if he’s not involved in another violent act in the future I’ll be shocked.

Greg Hardy is no victim. He’s listed at 6’5″ and 280 pounds. I didn’t find in this article Nicole Holder’s height and weight but from the pictures, obviously, she doesn’t even approach that. Maybe she’s 5’8″ and 140 pounds. Maybe taller or shorter or heavier or lighter. But what can’t be disputed is that Hardy is a man big enough and strong enough to pick a grown woman up and throw her across a room. She asked him to kill her so she didn’t have to do it herself.

And then? His case goes to appeal, she settles, and Hardy goes on to play for millions of dollars. His on-field performance as of late suggests he has a substantial contract extension coming soon. Holder will never see any of this money but what she will see—in articles and photos and memories and nightmares—is Greg Hardy threatening to kill her, hitting her, throwing her around like a doll, and then claiming he is the victim.

I can’t profess to know why she settled but allow me to speculate: She did it because she feels shame. Yes, shame. Shame of being a woman abused; shame of the bruises both physical and emotional; shame of being helpless; shame of living through a situation she felt she wouldn’t or couldn’t survive. And the easiest way to mitigate that shame may have been to just take a settlement – the details of which haven’t been released – and try and recover as best she can. No one can fault her for that.

But we can fault Greg Hardy for being a disgusting trash pile of a human being. For showing no remorse, for not seeking help for his violent actions, and for not displaying any evidence that he views women as humans.

People ask me why I’m a feminist and I tell them simply: Because I have a mom and a sister. But no one needs to label themselves in any way to label this incident for what it is: gross; wrong; inhumane.

I don’t know the details of Hardy’s family but he certainly has a mother. If this happened to her, who would he expect us to believe is the victim? A petite woman begging for a man to just go ahead and kill her? Or a giant of a man that by all indications was going to do this sooner rather than later?

I’m sure we can all say who he would think is the victim, and his answer in that hypothetical is the same as the answer in this reality.

She is the victim. He’s the assaulter. No one needed to see these pictures to know that was true. But here they are.

Men should stand up for women, stand beside women, speak out for women, especially in circumstances where they may not be able to, or feel that they are not able to, for themselves, because they are our equals in every way and to better our society we should see to it that everyone is treated with equity.

What’s happened in this case is not equity nor is it fair.

Greg Hardy knows football and he knows money, two things taken temporarily but now given back to him, two things that are a luxury and a privilege.

Nicole Holder had so much taken from her, before that night, on that night, and to this day and in the future.

Owning your dignity and integrity as a human is not a luxury nor is it a privilege: it is a human right. To have that taken is something Greg Hardy will never know. Unfortunately it is something Nicole Holder now knows all too well.