Hey, Hyundai, I abhor your ad

There’s a commercial that’s been running a lot the past few weeks, and it drives me absolutely bonkers every time I see it.

Why my anger? Because whenever I watch advertisements, I can’t help but imagining the creative process. Here, I picture a couple of people in a room. They’re, oh, 27, maybe 30, and they’re thinking up an idea for the big holiday sales pitch.

“How about this?” says Lennie. “Four friends in a car. Youngish. And they’re happy, because it’s Christmas. And everyone’s happy on Christmas!”

“I like where you’re going with this!” says Jenni. “They should be singing!”

And that’s how we have this liquid shit explosive. I mean, listen to the tune. What the fuck are they singing? And, more important, why are they singing? In the real world, a song like that comes on the air, the station is immediately switched. Even if you want Christmas cheer, you’re not gonna listen to such vomit. But, not only are they listening—they’re singing along. Which means they’ve heard the song before. And like it. Which is impossible, because it sucks hairy mule balls. Not jingle balls. Hairy mule balls. Big difference.

Also, I’ve learned something about these things through the years, and it’s that nothing is accidental. The lighting—purposeful. The angle—purposeful. The casting—purposeful. Here, the driver looks like Vinnie Chase from Entourage. Except he’s wearing my mother’s sweater. I suppose this is meant to portray seasonal coziness. Really, though, it just reminds me of Mom. And, eh, her sweater. 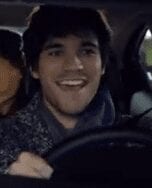 The woman next to him is rocking out. Which leads me to believe the song wasn’t actually playing during the filming of the spot—because one can’t possibly rock out to such music. So they probably told her to bob her head, swing it around a lot, pretend you’re at a Taylor Swift concert. She also happens to be wearing a plain bright yellow shirt. I know many women—none of whom own plain bright yellow shirts. 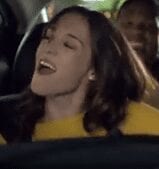 Most  interesting is the couple in the back seat. We never get a 100-percent clear shot of the man on the left. I’m guessing some market research company provided Hyundai with statistics showing that while whites buy 76.4 percent of their cars, a little diversity suggests open-mindedness. So they put him in, and he’s singing, too. I know not a single self-respecting black man who would be caught singing this song. Or, for that matter, a self-respecting white men. Or, really, anyone.

Lastly, we have the woman in the back seat next to the man with the 17-percent obscured face. She’s, by far, the least magnetic of the four, and may well be the producer’s daughter. Or she’s an aspiring model who took $100 to be here. Or I’m vastly underrating her, and she’s the next Meryl Streep.

No matter what, the ad is brutal, my head hurts every time it runs and now I’m adding to my own self-misery by blogging about it. Turns out the song is by Giants of Industry and is called “Get Happy.”