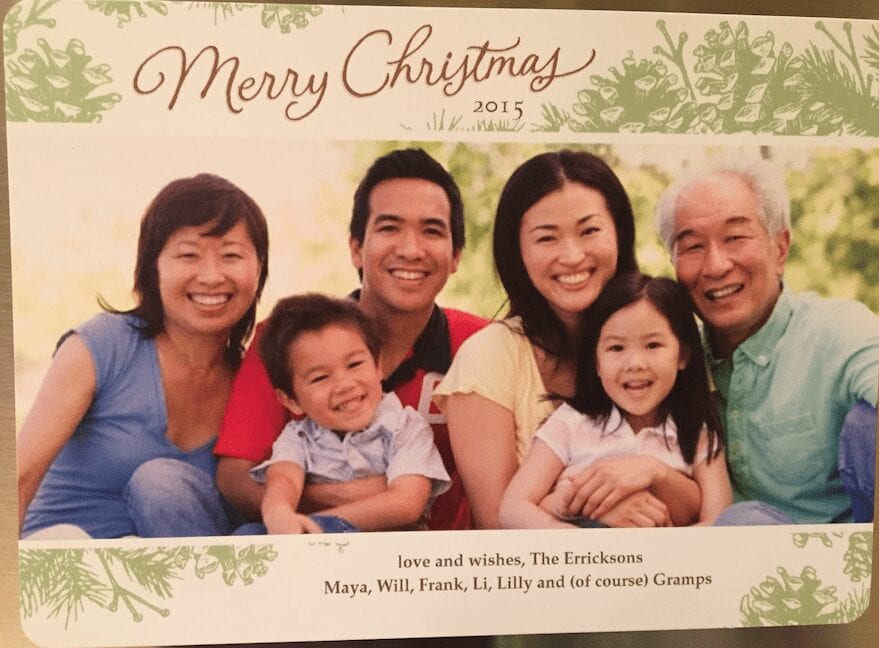 Throughout much of my adult life, I’ve expressed mixed feelings on the now-popular family photo holiday cards that overload American mailboxes.

It’s not that I mind good cheer. And it’s not that I mind cards. It’s just, well, back in the day the whole process seemed much more personal. Pre-photo cards, you’d go to a CVS or K-Mart and buy these blank holiday greeting cards. Then (gasp!) you’d actually write in them. Things like, “It was great seeing you at the fall festival” or “Better luck for the Lions in ’97.” Personal thoughts, stated in genuine handwriting, that expressed legitimate feelings.

Now, though, we just send the damn photo cards—rarely messages, often with computer-printed labels. No mess, no fuss, no emotion, no personalization.

I really hate that.

However, four or five years ago it brought me face to face with one of my all-time greatest ideas. I was sorting through some of the non-personalized family photo cards and I thought, “You know what’d be funny? If I took some of these and re-sent them to other people.”

So I did—and the game was awesome. Of course, you don’t always witness the results, because to do so you wind up revealing the secret. But every so often, you’d get gold. For example, my beloved sister in law, Leah. I took a card that featured two people and their dogs, wrote, “We should definitely get together again for that party this year. Love, Jim and Angela,” and sent it. A few weeks later, the wife and I are sitting across from Leah, and she says, “I had the strangest thing happen, and it’s driving me crazy …” She went on to explain how she received a card from people she didn’t recognize. She Googled them, looked through her phone records, old yearbooks—nothing. Meanwhile, I’m punching the wife under the table as she’s about to pee her pants. Pure awesomeness.

This has happened a few times, and it’s always terrific. However, the wife started feeling guilty about recycling genuine cards. “These are people’s families,” she said. “It’s not really cool.” I knew she was right—but ignored her for a few holiday seasons. Then, this year, we took the next step.

By we, I mean me and my two kids, who have long enjoyed the experiment. This time, we decided that instead of recycling cards, we’d create our own model. So first we Googled “Family photos,” and my son picked a lovely Asian family—it appeared to be two parents, an adult sister, a grandpa and two cute little kids. I asked the son to name them, and he came up with, “The Erricksons.” Then we went to Costco.com, where you can custom make your holiday cards. This was the best part, because on the model we selected there was room on the back to inscribe a nine-line message. Here’s what I came up with: 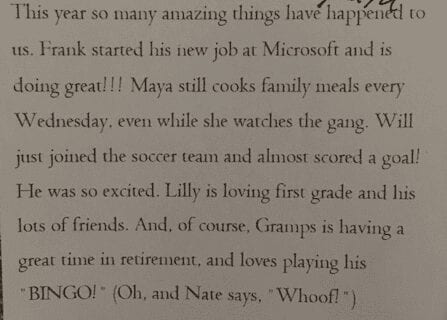 1. Although the family was Asian, I didn’t want to give them all Asian names. It just felt weird, and sort of un-American. I grew up with a bunch of Asian kids, and they were always Scott, Jason, Steve. That said, I thought—for fake authenticity—one needed an Asian-sounding name. Hence, Li (she’s pictured on the front, and presumably the one writing the message).

2. One of my all-time pet peeves is when people include dogs, cats. fish, hamsters on the card. I don’t know why—it’s just one of those things. So not only did I write, “Oh, and Nate says, “Whoof!”—I had this photo of Nate (Googled “dog”) alongside the message. Double pet peeve.

3. For reasons I’ve never understood, when my mother writes e-mails she’ll put nonsensical things in quotations. For example—We’re having “dinner” Friday with the Ruhlmans. Or, I hope the “baseball” game works out. I’m at a loss, but it also kind of fascinates me. Hence, as an ode to Mom, Gramps loves playing his “BINGO!”

4. People seem split 50/50 on those notes included with cards, where you get updates from the year. On the one hand, they could be construed as unnecessarily self-indulgent. But that really makes little sense, because a photo card is, in and of itself, self indulgent. I actually generally like the updates. But sometimes the information is simply unnecessary. As it is here. Maya cooks dinner once a week—so? Will almost scored a goal—eh, almost? Lilly has lots of friends—find me a first grader who doesn’t. But the best, truly, is Gramps, who probably hates playing Bingo and resents that his kids placed him in the assisted living facility that smells of pear and urine. Yeah, he posed for the photo. But only because he was promised ice cream. (I like how “and (of course) Gramps” makes him sound like the seventh cast member in a 1980s sitcom).

5. One of the keys—really important—is to write a personal note. It can be short and quick, but it needs to be done on the back. For example, “Jen, it was awesome seeing you at pickup. We should definitely have coffee again. — Maya” or “Rob, it’s been too long. Remember that show back in 78? I miss those days. Let’s talk soon. — John (aka “Gramps”).” The more specific (without being creepy, obviously) the better, because it makes the reader think, “Wait, I must know this guy!” However, a twist of weirdness doesn’t hurt. As long as it’s reasonable weirdness. For example, we sent this one to a friend out here who’s an amazing photographer … 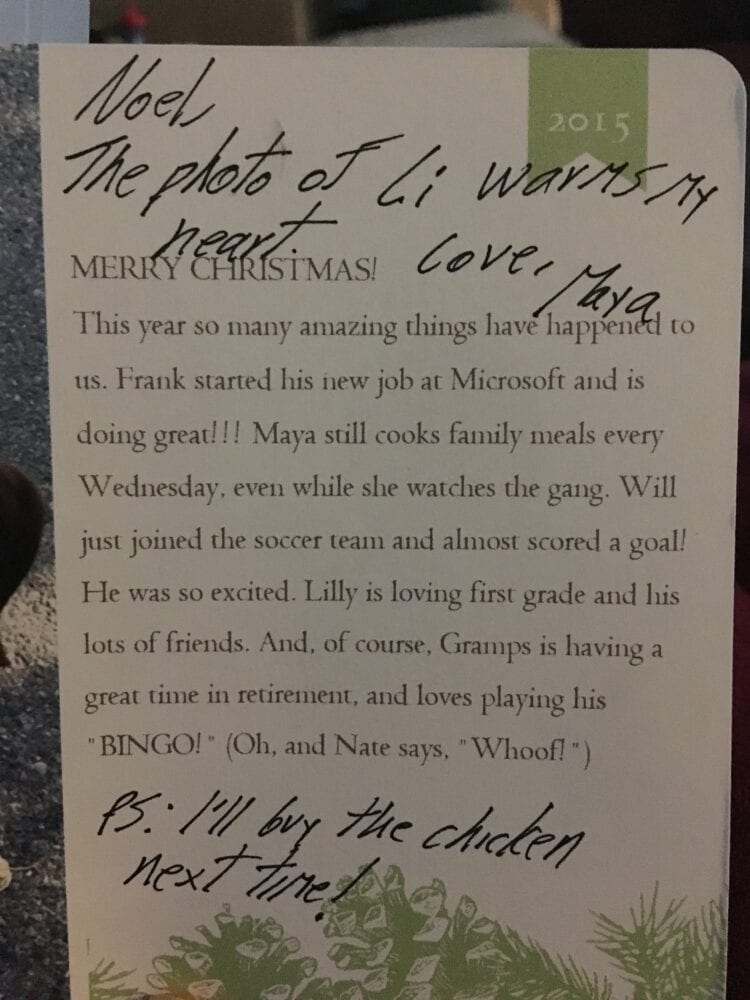 Anyhow, we mailed 40 cards. Some from here in California, but we knew the wife and kids were going to Florida last week, so the bulk were shipped from the Sunshine State in order to provide the unfamiliar JUPITER, FLORIDA postmark (California would give us away). I generally avoided people who would immediately identify my handiwork. I sent a bunch to my friends’ spouses, some to new neighbors and friends out here in Cali, some to old neighbors in New York. A couple were totally random—I literally looked up addresses of certain folks who would have no remote reason to think they’d be receiving a card from me.

The first reaction came a bunch of days ago, via Facebook. I have a longtime friend in Nashville named Warren. I actually met him back in the mid-1990s, when I profiled him and his late-wife, who was battling cancer. They were simply wonderful people, and Warren and I have kept in touch via Facebook and holiday cards.

Anyhow, one day I’m working and this pops up from his son … 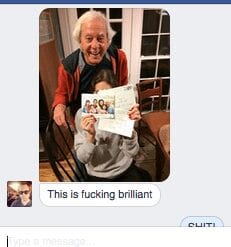 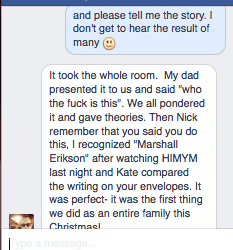 I can’t tell you how happy this made me. Like, truly, truly giddy. I then decided I wanted to hear more reactions. Yeah, it would reduce the number of people I could do this to in the future. But, really, what’s the fun if you never receive feedback? So I posted a photo of the Erricksons on Instagram and Facebook, and well … 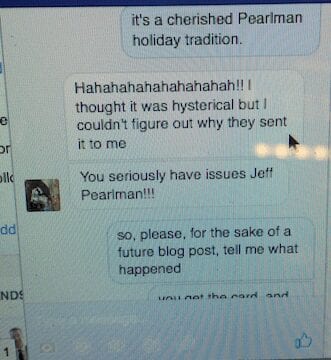 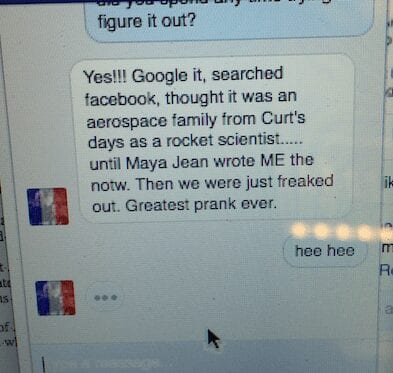 There were more, of course. My college roommate—a teacher—says he sorted through the names of old colleagues. Noel, the photographer, went through “customers of the past, Google searching.” Jill, a neighbor from New York, suspected me from the time she opened the envelope.

Ultimately, it always seems to end with a good laugh and lots of fun.

Which, I’m 100-percent sure, would make Gramps quite happy!