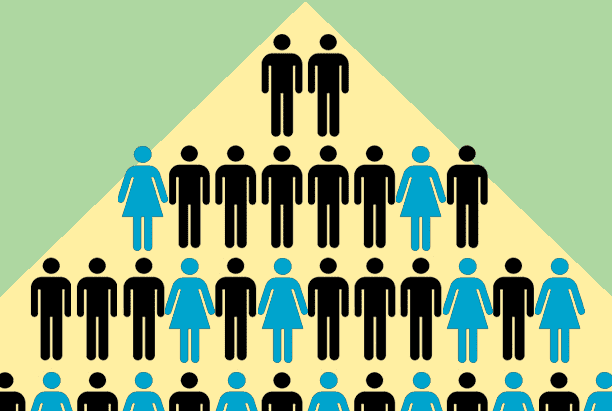 Back when we were kids, growing up on the mean streets of Mahopac, N.Y., my brother and I were hooked on a record we bought at the local music store. It was a compilation of Z100’s different on-air spoofs—pranks, characters, etc.

Anyhow, some of the skits have never left my mind. One was a song, “The Devil Dance,” mocking the New Jersey Devils. And another was called, “Small Boobs.” It was a song, made to sound like a commercial jingle, about how all the local news networks always had a lead female anchor with small breasts. It went something like: Smaller boobs/she’s got smaller boobs/’cause small and flat is where it’s at/On the nightly news.

It was good for a 12-year-old boy’s chuckle.

Yesterday was a strange one. I handed in a book the night before, and was feeling great. Went to the gym, hopped on a machine, turned on the TV. Only four or five networks are available. ESPN was talking about the Steelers. CNN was in a commercial. I flipped to Fox News, channel 66 or 68 on the dial. It was one of the network’s morning shows, and it featured the eternal Gerald Rivera on a couch, surrounded by four women—all in skirts and heels. Now, as has rightly been argued on my Twitter stream 100,000 times by now, nothing is wrong with a woman choosing to wear skirts and heels. Literally, nothing. 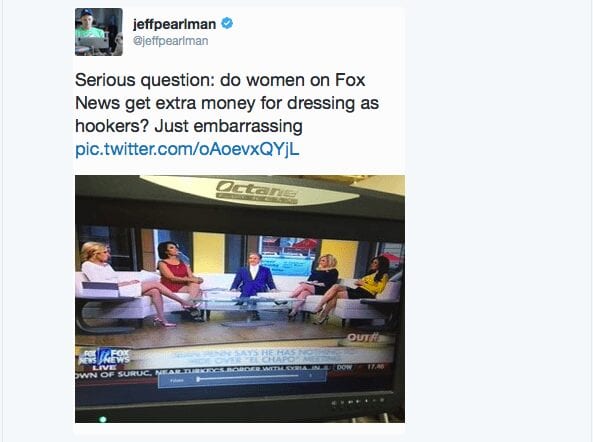 It was a ridiculously shitty brain fart, and—in this modern era of social media public shaming (which I’ve certainly partaken in)—I deserve the flogging. We all control what we write. It was my phone and my words. And, really, I owe the women pictured an apology (To be official: I’m sorry). Because it was bullshit. Also, to be clear, this isn’t me covering my ass, or cowering, or whatever. I don’t have a boss, so I’m not losing a job. I work for myself. I haven’t been called into an office that doesn’t exist. It was just a fucking dumb Tweet. And, again, to the women of Out#, I was wrong. Also, this wasn’t a liberal-conservative thing (I only know the political leanings of one of the women pictured) or a Geraldo thing. It was a me thing: Me Tweeting without thinking about the way the message would be received.

You called the women hookers!

You called the women hookers!

So what did you do?

I said they’re dressed like hookers, because I hate the way television news treats women.

That’s a fucking stupid way of expressing it.

The pressure on women, however, is ludicrous. It’s no secret (either that, or it’s the worst-kept secret) that looks play a MUCH larger role in the employability in women than men in television. It’s simultaneously laughable and disturbing. We were actually permitted a peek into the world a few years back, when Fox demoted America’s best football sideline reporter (Pam Oliver) and replaced her with, eh, someone significantly less talented. It was the most transparent example of something that happens (in one form or another) all the time. Hell, look at sideline reporters in professional sports. Again, no secret—networks generally see this as a place for a perky, pretty (emphasis on pretty) young woman. But if you’re overweight, or not a beauty—good luck (Yes, there are surely examples. But they’re few and far—and almost never at the national level). Meanwhile, try getting women into the booths as play-by-play and color commentators of men’s sports. Try landing them those gigs. Again, it has happened. But almost never. They’re not even considered.

It’s no coincidence that the people doing the hiring, and making the decisions, are almost all men. It’s also, from a business sense, fiscally logical. ESPN’s audience is predominantly male. Fox News has many more male viewers than female viewers, too. Human beings are suckers for visual impulses. There’s a reason Sports Illustrated still publishes its Swimsuit Issue a solid three decades after it became clear the thing wasn’t cool. We want to be pleased. Attractive women are, to many men, pleasing.

But what happens when the women age? What happens when 28 turns 38, and 38 turns 48, and 48 turns 58? Again—men last. Hell, out here in Southern California, Fox (not Fox News) has a morning program, Good Day LA, that has become a running joke among friends. Here’s the cast from a promo shot … 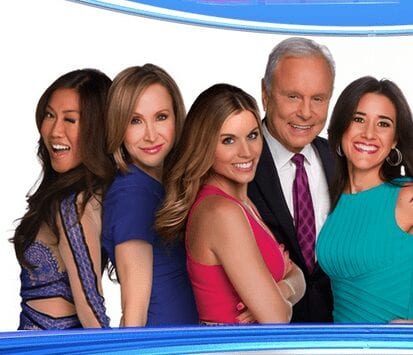 It’s not that Steve’s colleagues aren’t skilled. It’s that, when they reach ol’ Steve’s age, they sure as hell won’t be surrounded by four handsome guys. No chance in hell.

Call me as asshole, call me a dick, call me what you want—again, I accept the criticism for a really stupid statement. But, when it comes to the issue at hand (the mistreatment of women in media), I know I’m right.

There needs to be an even playing field in television.

* Yes, you’re right. Even if you want to wear heels and a short skirt. But NOT if you feel pressure to dress as such, or know there’s an expectation (stated or unstated) you dress as such.

PS: On Twitter, a ton of the insults came from people who use the term “Libtard” in their bios. As in, “I hate Libtards.” If you’re gonna rightly bash someone for his inappropriate labeling, I’d argue incorporating “retard” into any sort of sneer disqualifies your take.