Why a USFL biography 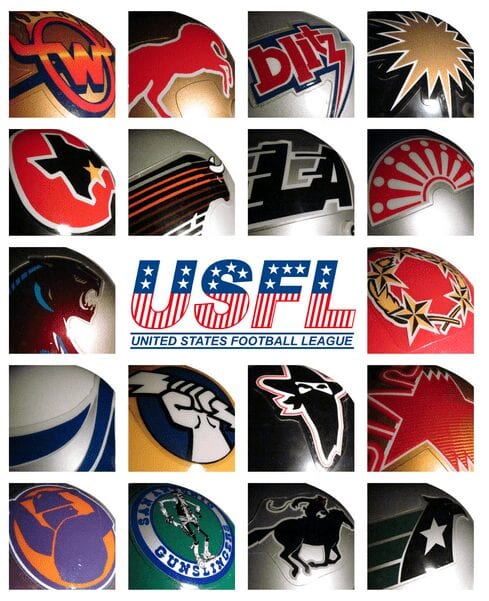 During my senior year of high school, one of my classes was AP English with a teacher named Rich Height.

Mr. Height was an adjunct professor at Marist College, and he took writing very seriously. He even had his own organizational methodology laid out on paper, and had it copyright protected. I can’t remember the name, but I’m sure one of my old Mahopac High classmates will recall as soon as he/she reads this.

Anyhow, Mr. Height was a quirky duck. He was an obese man, sorta sloppy, and many students made fun of him behind his back. He had a big deliberate walk, a grand way of speaking, bragged in a way that we weren’t supposed to think he was bragging. Every now and then he’d invite students to his house for lunch to talk the craft. I remember going once, with my pal Jonathan Powell, but the specifics are grainy.

I don’t remember the specifics of too many of my high school teachers, but I remember Mr. Height. Yes, because of his physical stature and booming voice. But mainly because, in the spring of 1990, he assigned the class a 20-page senior thesis (subject of our own choosing, as long as he approved)—which wound up changing my life.

My paper’s title:  The Downfall of the United States Football League.

Today is Jan. 14, 2016. I’m sitting in a cafe in Dana Point, California. I have a big mug of coffee, a small plastic cup of water—and a stack of books and articles about the USFL.

It’s time to start reporting the sports project of my dreams.

I can’t say I’ve been thinking about writing a USFL biography for 26 years. I certainly didn’t know I’d be doing up books back in 1990, when my main concerns were track and picking a college. But The Downfall of the United States Football League turned into an obsession; one that wound up being submitted to Mr. Height at a length of, I believe, 42 pages. It was my absolute favorite high school assignment, and I found the USFL’s fall both riveting and tragic. It was a league I’d loved as a young boy—the funky helmets, the big names (Herschel! Flutie! Reggie White! Jim Kelly! Reggie Collier!), the weirdness (the Portland Breakers also played in Boston and New Orleans); the Arizona Wranglers and the Chicago Blitz were traded for one another; the second world championship game ended with fan rioting; Donald Trump owned the New Jersey Generals and thugged the other owners into switching from spring to fall; on and on. The stories are outlandish; the characters bigger than life; the game (football) our legitimate national pastime. Thanks to the USFL, the NFL has coaching challenges, instant replay, huge salaries. The league was weird and cool and captivating and … awesome.

As has been noted on Twitter, I generally guard the topics of my books as a bank security guard watches the vault. Ever since Game of Shadows came out two weeks before Love Me, Hate Me, I’ve suffered through this paranoid fear that, should I say what I’m writing about, someone will beat me to the punch. It’s admittedly irrational, but we can’t always choose our little quirks, can we?

This, however, is different. First, the odds of someone else planning a biography on a 30-year-old dead football league seems remote. Second, I’ve lost a little of my paranoia. Third, most important, I wanna try a new approach with this one. In short, I want to use this space—and Twitter and Facebook—to take people along for the reporting and writing journey. I want suggestions, tips, thoughts, ideas. If you’re a fan of the USFL, or you just love sports nostalgia, I want this to be our book project, not merely mine.

I’ve now completed seven books, and this one is different. First, because of my history with the subject. But second, because it doesn’t come with the automatic audience of past projects. From the ’86 Mets to the ’90s Cowboys to Bonds and Clemens and Walter Payton, all those ideas had a chance—based upon subject alone—of selling big. Not all of them did, but the names meant they had shots.

PS: My e-mail address is anngold22@gmail.com. USFL thoughts? Hit me up.

PrevPreviousWomen, Televised Media and a really dumb Tweet
Next“Um, Jenny, what the …”Next