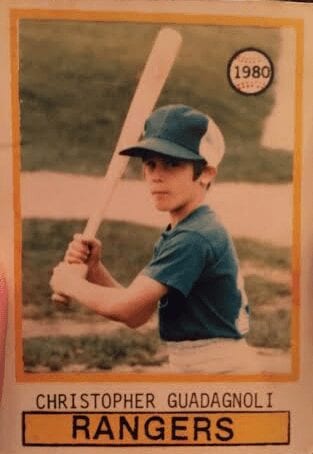 Over the past few nights my son and I have been building a giant castle-type structure out of 1970s and ’80s baseball cards. He had an enormous bag—filled with thousands upon thousands of my boyhood collection—and we lie on his carpet at night and add, piece by piece, to the monument.

Emmett enjoys the structural planning, as do I. But what I truly dig is the randomness. When you stick your hand into that bag, anything can pop out. Wait, anyone can pop out. Sure, you’ll get your Reggie Jackson, your Pete Rose, your Roger Clemens and Steve Sax and Dave Parker. The cool points come, though, when baseball players you have not thought of in 30 years escape through the time portal. Suddenly, you’re staring down upon Rob Wilfong and Joel Youngblood and Champ Summers. Look, look—it’s Mike Fetters! It’s Rob Picciolo! It’s Tim Birtsas! It’s Mike Fitzgerald!

It’s a cliche to break out the ol’ “When I see [X], I’m taken back in time to [X].” But here, the cliche applies. There’s a 1980 Youngblood, for example, that’s all creased up. As soon as I saw it, I remembered finding it on the Lakeview Elementary blacktop and sticking it in my pocket. Only I didn’t merely remember. I felt it. Like, the emotions and texture of 8-year-old Jeffrey Pearlman hit me. Only for a second. But I felt it. I did.

As a boy, I used to keep my best cards in a pair of binders. On weekends John Ballerini and Scott Choy would come to my house with their binders, and we’d swap and trade and work deals. We were convinced the cards would ultimately be our payday. Hell, if Kevin Maas is worth $5 now, imagine what he’ll be in a few years!

I digress. Two nights ago I was plucking cards, plucking cards, plucking cards, when—there it was. The gold standard of finds: A 1980 Chris Guadagnoli. I’d forgotten the item existed, yet as soon as I saw it … memories: We were in second grade. Chris was a really good athlete, and he played for the Rangers. I had yet to sign up for Little League, but I thought it so cool they had cards. So Chris, being a nice guy, gave me one of his. We’re talking 36 years ago—and I suddenly recalled the whole thing. Him playing for the Rangers. Him handing me the card. Me being dazzled.

It’s not merely the power of nostalgia.

It’s the power of baseball cards.