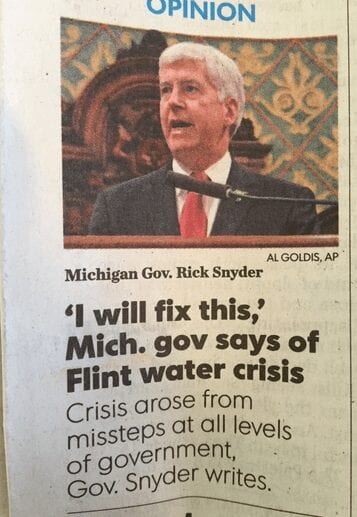 Mistakes happen, and too often we fail to allow for that.

The truth is, humanity is flawed. We glance down at our iPhone while driving and cross into another lane. We teach a class and give someone a bad grade because the kid is annoying. Mean things slip from our lips. We vote for people who wind up doing terrible things. We gossip, we misjudge, we condemn.

Again, mistakes happen to all of us.

Some mistakes, however, are both unforgivable and un-fixable, and no matter how many times one apologizes, or promises to make right, it matters not. You have done something (or overseen something) so ridiculously awful that there’s no turning back, and you simply must live with the consequences and aftermath of your decisions and actions (or inactions).

This is Rick Snyder.

In case you missed it, this morning’s USA Today featured a guest column from the Michigan governor, promising to “fix” what happened in Flint with the tainted water supply. Snyder (or, in all likelihood, one of his handlers) wrote, “I will fix this, and I mean it.”

Which, while lovely and surely well intended, is absolute nonsense. You can’t fix lead poisoning in young people. The ensuing illnesses; the ensuing cognitive problems … nothing vanishes with money, or better screening, or access to the state’s top doctors. Nope. Your life is forever altered, and not for the better. Your hopeful path no longer exists. You are sick. Not for a week, a month, a year. For life.

Sick and, in the case of most Flint residents, poor.

It’s the heartbreaking story of the year, and Snyder’s self-serving bullshit column only serves to make it worse. Take these two paragraphs, for example …

There is so much wrong here, my head is spinning. First, when you write a piece apologizing for the horrible crap that’s happening, you don’t take time to brag about your accomplishments. It’s SUCH a politician thing to do—Yes, our tanks killed 50,000 innocents. But their dogs mostly lived. It actually violates the first rule of Apologizing: 101: When presenting oneself as contrite, don’t simultaneously be a dick.

Second, Snyder is a hard-core conservative. Which is fine and dandy, and certainly his right. He’s also one of these big-government-is-the-evil-of-our-time figures. Which, of course, is sort of embarrassing when suddenly, after messing up, you: A. Call for the National Guard; B. Request federal emergency assistance; C. Provide Grade-A proof why the EPA is so imperative.

Personally, I don’t see how Snyder survives this one. He’s the governor, and this is his ballgame.