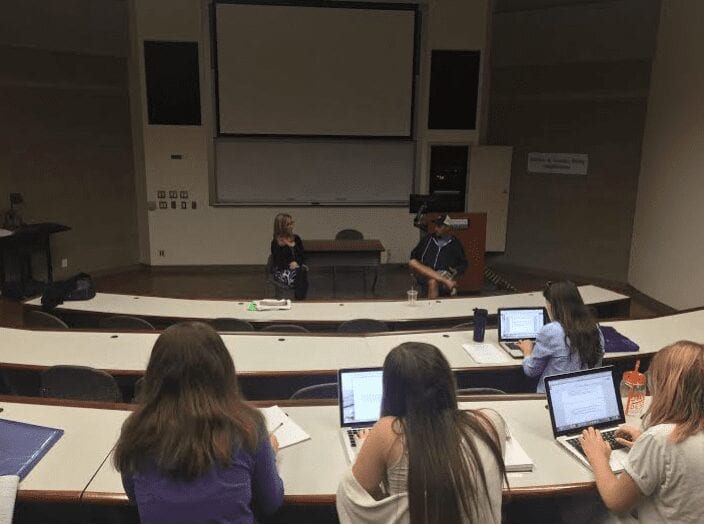 I’m in my first semester teaching journalism at Chapman University here in Southern California. It’s a new place for me, and I wanted to start the class/semester off right with a couple of quality guest speakers.

A few weeks ago, Jason Shuman (producer of a bunch of movies) came in, and he was outstanding. I’ve known Jason for quite a while, so the humor/insight/empathy was hardly surprising. Great stuff.

Yes, Jeanie Buss—owner of the Los Angeles Lakers. I initially asked her about speaking to the class a bunch of weeks ago. We know one another from my book, Showtime, and while we’re not close friends or anything, we certainly have a friendly relationship. Jeanie is the nicest sports owner I’ve ever dealt with, as well as the most human. There’s no flash of ego, no arrogance, no holier-than-thou strut. She’s, simply, good peeps.

That being said, I really didn’t think she’d accept. Again, Jeanie Buss owns the Lakers. And I’m an adjunct at Chapman, a small college way down in Orange. What was in it for her? Why waste a day? The drive would surely suck, and the return drive would be even worse. Seriously, what was the benefit?

So yesterday Jeanie came—and she was beyond fantastic. I have 13 students in my class, but opened the session up to others. In total, there were probably, oh, 35 in attendance. You’d think an NBA owner/executive would be guarded, limited, short. But Jeanie was open, definitive, exploratory. She spoke at length on her sadness of Kobe; on her frustration over the team’s awfulness; on her heartbreak—vivid heartbreak—when Magic Johnson found out he was HIV positive. I mean, that was probably the moment. I’m not sure if Jeanie felt as if she were about to cry—but I did. And so did the students, few of whom were even alive when Magic retired. It was just … euphoric storytelling, unbelievable insight. She discussed her relationship with Phil Jackson (loving and kind of adorable in a let’s-play-Scrabble way) and her brother (she stood up for Jim, but you could kinda tell it’s complicated).

Early, before she dove in, I asked, bluntly, “Why would you come to speak at Chapman? It’s a small school, a long drive … why?” And her reply was telling. In short, Jeanie Buss said she wants to know what young people are thinking; wants to stay connected and understand. She said she feeds off the energy of a college atmosphere, and had this respect for education that never faded.

The respect, I assure her, is mutual.