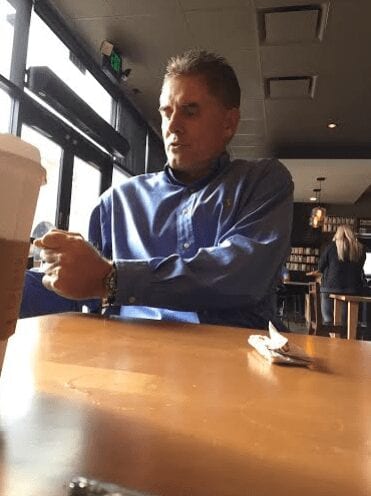 This morning I met a ghost.

Well, not really a ghost.

This morning I met Ed Luther.

In case you missed this, I’m working on a book about the USFL, my all-time favorite professional sports league. A bunch of weeks ago I tracked down an address for Ed Luther, the former San Diego Chargers backup quarterback who joined the Jacksonville Bulls in 1985. He lived only about two miles away, and (since I didn’t have a phone number) the son and I drove to his house. Ed wasn’t home, but I left a copy of Sweetness and a note. We created this mini documentary, Finding Ed Luther, just for kicks, then waited and waited as he never called.

Anyhow, I arrived at the nearby Starbucks at 7 this morning, and Ed walked in a few minutes later. One of the weird things in reporting books on long-ago players and leagues is that, for a good amount of research, time stands still. Or, to put it different, 1985 Ed Luther was the only Ed Luther I knew. He had brown hair and boyish features and the happy grin of a football player on a new team making a good chunk of change. He was 30 and on top of the world.

The Ed Luther I met today was wonderful and friendly and terrific. But he’s the 30-years-later Ed Luther, which means he’s older, more mature, three decades removed from football. He told stories and laughed and recalled his days of backing up Dan Fouts, of handing off to Mike Rozier, or joining an upstart football league he’d known little about. It was a great 1 1/2 hours; one I’m happy to have as a life experience.

But the passing of time is a stark thing when you write books like this. And, emotionally, it’s hard to witness.