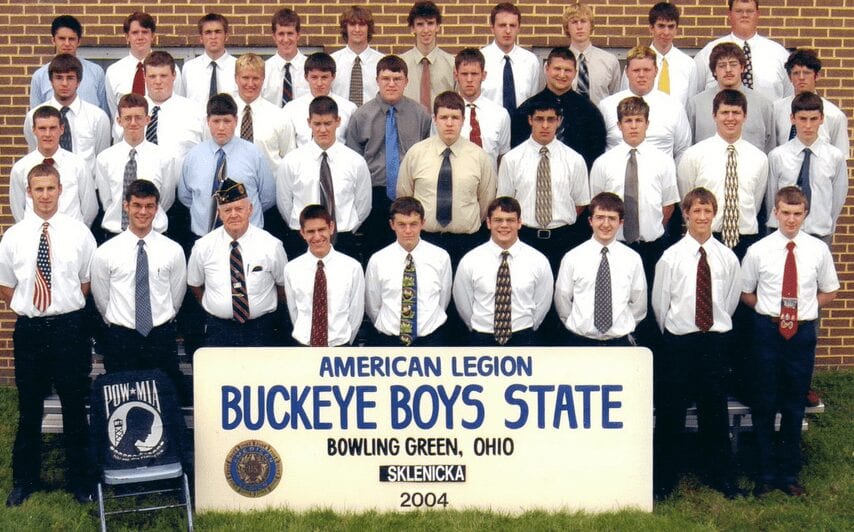 There is a thing called Boys State, and I have to believe it’ll ring a bell with a few people here.

Every year, American Legions across the country select high school boys to attend these, um, conventions. It’s considered an honor—you’re picked to hang with a bunch of other future leaders on a college campus for three or four days and learn about government, citizenry, patriotism, etc. Here, this is from the official Boys State website … 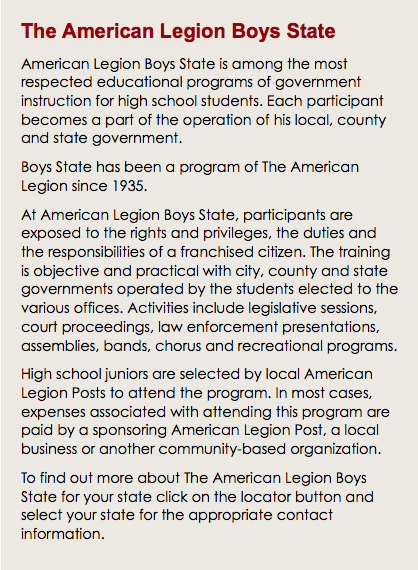 Toward the end of my sophomore year at Mahopac High School, I applied for Boys State. Why? I’m not certain, but I’m guessing someone told me it’d be a huge boost to future college applications; something to make a B student with few extracurricular activities stand out. So I wrote a note to the local Legion, then was brought in for the requisite interview. I remember the scene pretty well: The Mahopac Legion building was small, dark and it had a bar. Inside, everyone was around the bar, drinking. An old guy in a VFW triangular hat asked me some questions. Then I left.

A few days later, I received the call: Welcome to Boys State!

Truth be told, I had no idea what to expect. I did zero research into Boys State, save that it meant being away from home for a few days. So, a couple of weeks later, I packed up my stuff and had my dad drive me to one of the SUNY campuses, maybe 1 1/2 hours away. When I arrived, I was welcomed to the facility and handed a couple of white T-shirts with a Boys State logo in the center. “You have to wear these while you’re here,” someone said.

I put on my shirt and walked around the campus. There were booths for different Boys State activities; things to see; blah, blah. When I returned to my dorm, I walked through the lobby, past a marine dressed in full military garb.

I kept walking, thinking he was talking to someone else.

“Hey you!” I turned around.

“You don’t even salute when you pass an officer?”

The activities, I quickly learned, were, um, weird. All about discipline and rigidity, with a big spoonful of right-wing politics. The next day I entered my building again, and the marine was sitting. His name, as I know by now, was “Orange.”

“Your shirt’s untucked!” he said.

“WHAT did you say?” Orange replied.

I turned my back and started to walk the steps. “WHERE ARE YOU GOING? WHAT ARE YOU DOING, BOY? BOY?”

Tears started streaming down my cheeks. What the fuck was this thing? How did I end up in hell? I reached my floor, Orange still screaming. I turned, and he saw my eyes were red.

He stopped yelling. “Hey, man,” he said. “There’s no reason to get upset. This is supposed to be fun. Seriously, it’s OK.”

Two days later, I was named my unit’s Best All-Around Boy and received a lovely certificate.

It was, without question, a sympathy vote.