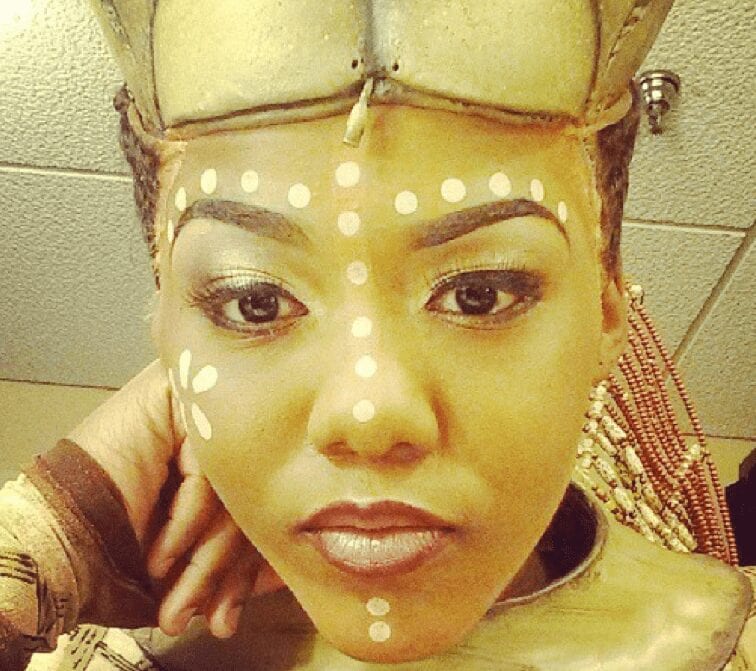 So last October the wife and I took the kids to see The Lion King near our home in Southern California. We filed into the Segerstrom Center, and while waiting for the show to begin I found myself combing through the Playbill, looking up cast members.

The first name listed was Nia Holloway, who stars as Nala in the national tour. So, with nothing to do and Quazes eternally on my mind, I sent the young actress a message, via Twitter. To my delightedshock, she responded moments later from backstage. It was, easily, the quickest Quaz reply in the series history.

At age 20, Nia is both one of the youngest Quazes, as well as one of the most accomplished. Along with her lengthy Lion King run, she’s a budding pop music superstar whose work can be heard here. Nia is an active Tweeter, an active photo/video poster and, to be clear, not a real lion.

Nia Holloway, the circle of life is complete. You’ve been Quazed …

JEFF PEARLMAN: Nia, I’m gonna start with a weird one, and I hope it doesn’t offend. So earlier today I went to see The Lion King with the wife and kids—and seven hours later the music is still in my head. And it’s driving me sorta kinda insane. I mean, I like it—but not 1,000 times between my ears. You’ve been doing The Lion King since 2013. That’s more than two years of the same songs over and over and over. So, um, are you at all losing your mind? Do you love the music? Get tired of the music. And, being 100 percent serious, how do you stay up for a gig you’ve performed so often?

NIA HOLLOWAY: Well, to be honest the Lion King is filled with timeless music, so as an artist I truly truly appreciate it. And I continue to look for ways to keep myself interested by perfecting my craft every day so that performing the show doesn’t get redundant. There are tons of ways to say a line or sing a note, so you have to keep that in mind day by day. You can never stop getting better.

J.P.: So in 2013, when you were 17, your parents took you to an open call audition for The Lion King. I’m fascinated by this: A. What prompted them to do so? B. Was it just another audition for you, or bigger? C. What do you remember from the experience?

N.H.: We heard about the Lion King audition from a family friend on Facebook. I was 17 and they were calling for 18 and up so we were kind of skeptical about me actually landing the gig. It was a long-shot and we were willing to take it. So glad we did! I remember being extremely nervous, but confident at the same time. And I really did learn so much just from the audition with the casting director, Mark Brandon. It was definitely one of the most unique auditions I’ve ever done.

JP.: Tell us exactly about the moment you learned of landing the part. Where were you? Who told you? What was your reaction?

N.H.: So it was the spring break of my junior year, and I was having the most uneventful spring break. My mom woke me up at about 7 o’clock before she went to work, I’m thinking she’s about to ask me to walk the dog. However, she tapped me a couple times until I woke up and said, “Good morning, Nala.” I jumped up and looked at her and said,”No!” She screamed back, “Yes” and me and my entire family just hugged each other and cried our eyes out. We knew right then and there my life, and our lives, were about to change for the very best.

J.P.: Your grandma is Loleatta Holloway, the legendary soul/disco singer who passed in 2011. Your great-grandmother is Syllvia Shemwell, the Sweet Inspirations singer who passed in 2010, and your great aunt was Judy Clay, the gospel singer. So I’m wondering what impact your lineage has had on your career choice. In other words, when did you know you could (and wanted to) sing, and what role did those women have in this?

N.H.: All of those women had such an impact on my wanting to be an entertainer. The legacy they left behind inspires me every day. I have so many women to emulate right in my family. Specifically my grandmother, Loletta Holloway—she vocal trained me along with my father, and honestly taught me the ins and outs of staying true to yourself in this industry. She made it a point to tell me how important it was always be able to look myself in the mirror.

J.P.: What’s it like when you’re performing on stage and a cell phone rings, or you see someone texting? And how often does that happen?

N.H.: It doesn’t happen as often as you would think, but when it does you want to take a second hop off the stage and put the phone in your pocket. But in reality, you have to just ignore it and stay in character. 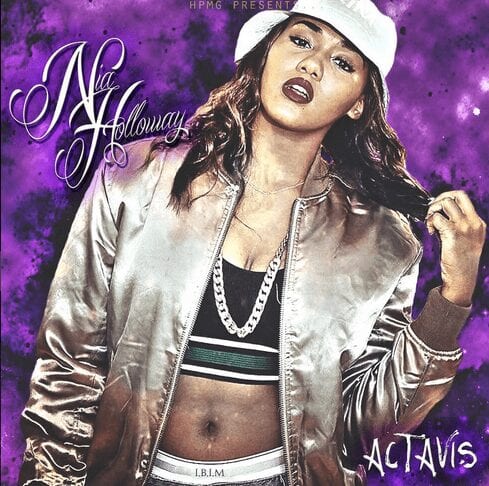 J.P.: In 2011 you were a cast member of Majors & Minors, the Hub Network reality TV show that took a bunch of young singers and had them mentored by stars like Brandy and Adam Lambert. What was that like? How much of the “reality” was truly reality? How much was scripted? And how did that experience change the way you now view reality television?

N.H.: Being on Majors and Minors was an amazing experience. I got to meet and work with a lot of artists who inspired me musically and I made lifelong friends with a lot of my cast mates. I definitely learned reality TV is not so much reality. The majority of what you saw on Majors and Minors were genuine moments, however, we may have had to reenact those genuine moments a couple of times. LOL.

J.P.: I just watched a clip of you singing the Star Spangled Banner before a basketball game, and I know you’ve done the anthem tons of times at local events. So what goes into doing the anthem? Is the song hard or easy? Are you 100% confident you know all the words? Is it scary, or no biggie?

N.H.: Singing the start of the Star Spangled Banner is always special to me. I definitely still get nervous, but I try not to psych myself out so I don’t run into the problem of forgetting the lyrics. Hasn’t happened yet! * knocks on wood* 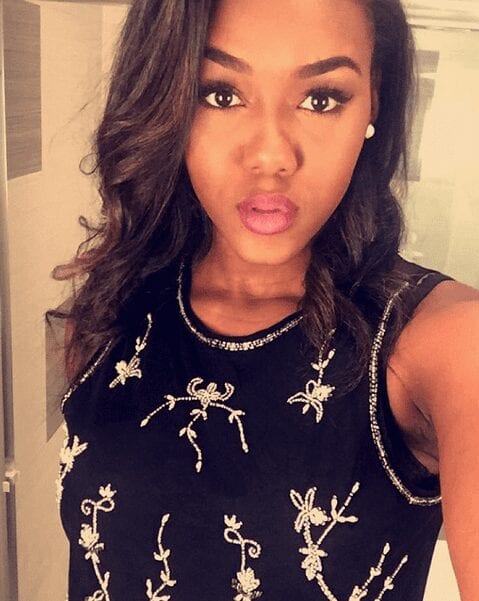 J.P.: You were a small forward on the Norcross High girls basketball team that won a state title in 2013. What’s the basketball scouting report on Nia Holloway? And was it hard giving up the sport in order to focus on career?

N.H.: Nia Holloway’s scout report is not too bad! I was no star, but I was a role player and I enjoyed every minute of basketball. Although I loved it and I had so much fun with the girls I played with, when The Lion King called it was not a hard decision to chase my dreams.

J.P.: It seems like your travel schedule must be a beast. Always on the road, in hotels, strange cities. How do you handle it? Do you hang with cast-mates away from the theatre? Do you have hobbies? Do you like touring areas, or staying somewhere with a book?

N.H.: Touring can be pretty draining when it comes to missing your family and being in unfamiliar places. I keep myself occupied with activities like yoga, kickboxing and writing. I also have a career as a independent artist. My entire time on the road I’ve been working on my own music, and I just recently released a single on SoundCloud called,”Actavis” and released an EP earlier this year. So, even with touring, I manage to keep myself very busy.

J.P.: What are you thinking on stage? What I mean is, here you are, a lion, right? Do you feel like a lion? Are you deep in the character? Or are there times when you’re like, “Man, I could sure go for some ice cream” or “What’s up with the bald guy in row three?”

N.H.: Well, it’s not the easiest to be a lion especially when you are human so it’s super important to be dialed in and focused on your performance. However, I can’t lie and say I haven’t thought about some leftovers a couple times on stage.

• Without Googling/asking anyone, how many Hall & Oates songs can you name?: I know zero Halls and Oats songs. [Jeff’s note: This one pained me]

• Celine Dion calls. She’ll pay you $25 million to spend all of next year starring as Celine Dion in her new Las Vegas production, “Celine Dion is Amazing, and the Rest of You Stink.” The catch: You have to live inside a cardboard box in her driveway and get a tattoo of Celine’s pet llama on your shoulder. You in?: I love llamas! I’m in!

• I just don’t love how Joe Girardi handles a pitching staff. Thoughts?: I think Joe is doing a great job.

• When Whitney Houston died, some critics wrote that she selfishly abused her gift (her voice) and never fully appreciated what she had. Is that, in your mind, a fair take?: I don’t think that’s a fair take at all. I think people should just focus on the beautiful music that Whitney Houston left behind for this world to cherish forever. She made a mark that was so unique and can never be replaced. I don’t think we should let her downfalls in life overshadow her accomplishments. We all go through things in life, Whitney Houston had to go through it in the eyes of the entire world. I actually think people should cut her some slack and celebrate the life, the love, and the music she shared with us.