Letters from a ghost

The first e-mail arrived four days ago, from a woman named Andrea. Here it is … 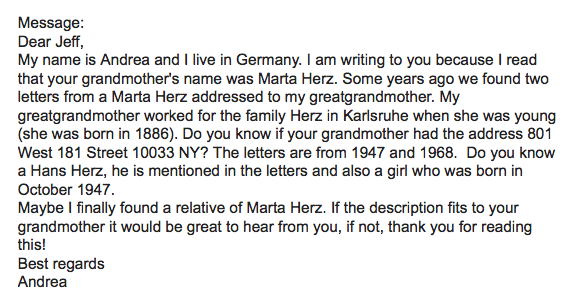 I was, to be honest, a tad skeptical. The Internet is a creepy place, filled with Nigerian princes who want to wire you $5 million and quasi-friends lost without money in a London motel (Please wire it now!!) and on and on and on. So, again, I didn’t know what to make of Andrea. Yes, I’ve written a few things about my beloved late grandma, Marta Herz. Like this. And this. But it was entirely possible, if not likely, that “Andrea” (if that were even her/his real name) somehow saw the posts, did a quick Ancestry.com search and scored me as an easy mark.

So I wrote back—excitedly, but wanting to see the letters, or some proof, or something. She hit me back, with this … 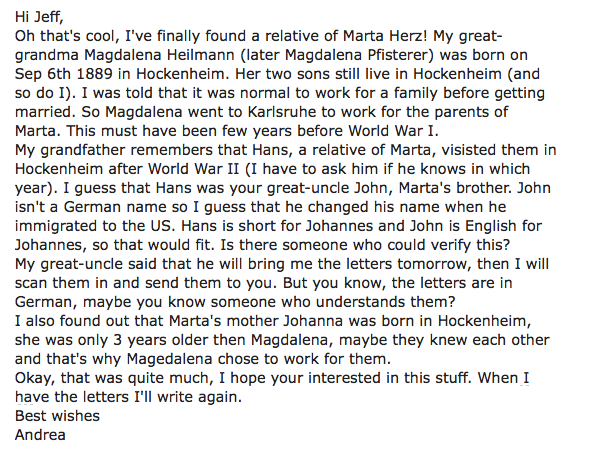 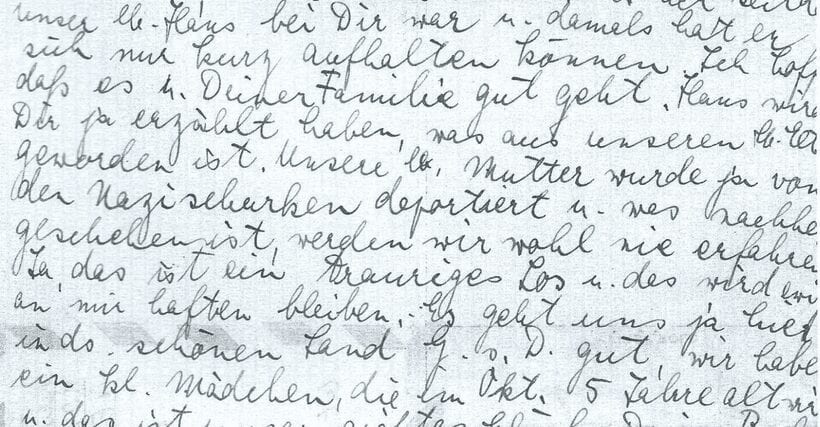 I took to Twitter. “Can anyone translate German for me?” Two people ultimately stepped forward, out of pure kindness and decency. They read the letters. They translated the letters.

You’re not supposed to play favorites among your children, or your grandparents. But I sorta did. Marta Herz was my favorite. First, because she was this warm German woman who always brought me and my brother chocolate; who took us to the circus and the Museum of Natural History; who smelled of cocoa and baked these holiday cakes that used about 7,500 eggs and always came accompanied by a warm, sweet creamy sauce. My grandma lived in the Washington Heights section of Manhattan, so when I called New York City home I would regularly take the subway up to her apartment and either eat there, or accompany her to the nearby Riverdale Diner. I used to tell Grandma, “I know you’re in your 80s and I’m in my 20s, but we’re friends.” And I meant it—we were not just relatives, but friends. Very close friends. I was heartbroken when she died in 1999, and I’m still heartbroken, 17 years later. I can hear her voice, picture the details of her apartment, hear the echoes off her hallway. I have the chills, just writing this.

Anyhow, the letters were converted into English. And … wow. Just wow. My grandma and grandpa (who died while I was in high school) came to America to escape the Nazis. My grandma’s mother, Julia, did not make it (the ‘J’ atop my name belongs to her), and was killed in Auschwitz. As a residue of the nightmare, Grandma almost never spoke of the Holocaust. She’d allude to it from time to time, but her replies were always flat and basic. Even when I interviewed her for a high school paper, she kept things very basic and simple. Times were bad. It was hard. I was sad. That sorta thing.

It has been almost two years since Hans visited you, and he was only able to stay for a short amount of time back then. I hope your family is doing well. I’m sure Hans told you what happened to our family. Our mother was deported by the Nazi villains and we’ll probably never know what happened afterwards. Yes, it’s a sad fate and I will have to carry it. Thank God, we’re now doing well in this beautiful country. We have a little girl, who will be five years old in October and who is our greatest blessing. Your boys must be young men of at least 14 to 18 years already? Weren’t you surprised when you saw our Hans and saw how big he was? Hans is holding a good position and is a hard-working human being. I’m supposed to ask you on his behalf, whether you have been able to have the Jewish cemetery fixed again and if my grandparents’ grave stones have been put up again. Please, be so kind and write me about it. – Yes, all has changed over the years and how much misery has come over Germany. It had to come this way after they had chased away innocent people like our great mothers and after much more happened that one can’t even talk about. You’re probably doing better than people in the city, because you’re more likely to have groceries. Still, it must be terrible. I would be very grateful if you wrote back and am wishing you and your family all the best.

I didn’t cry, but I felt like crying. It was like reading a letter from a ghost; this communication from 70 years ago that was forever lost, then suddenly found. The two other notes, from the 1960s, were equally wonderful, and had similar emotional impacts.

I’m not even sure of the point here, except that I’ve been reconnected with my grandma.

For that, I’m beyond grateful. 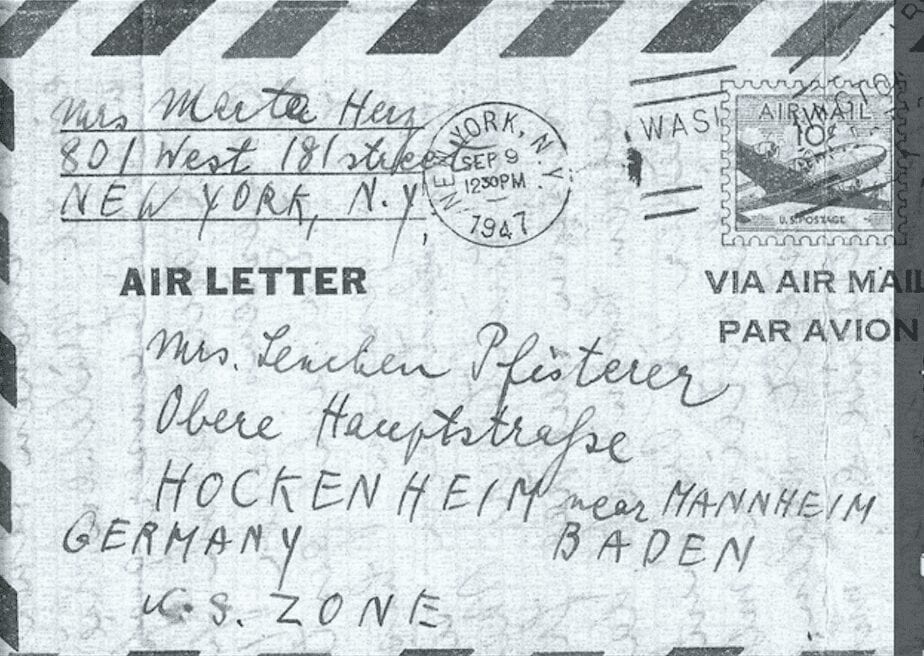 PS: HUGE props to Andrea and the two translators. Huge.