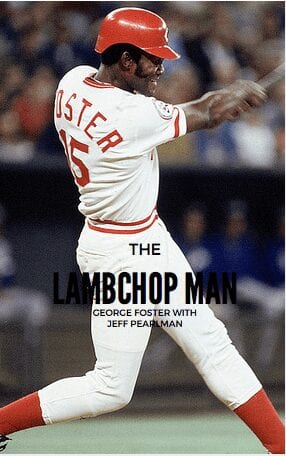 “I do,” replied George Foster.

We both smiled. I think he thought I meant the meat. But I meant his old sideburns. Certainly not the meat, because I don’t eat red meat. Ever. Like, never, never, never ever. Plus, back when I was a kid I desperately wanted George Foster’s lambchop sideburns. Not the reduced-fat ones from his brief span with the Chicago White Sox. No. I sought the full thick-and-bushy Cincinnati 1977 treatment.

Alas, my hair was sorta scraggly and it never took.

I digress. What did take was one of the great literary efforts of our times—four years of me sitting down with George and talking about baseball, sideburns, meat, more baseball and his love of the No. 15, which he wore throughout his career. The result of our hard work is “The Lambchop Man,” George’s highly anticipated autobiography. You can order it here beginning today.

In “The Lambchop Man,” George and I take on some of the game’s serious issues. Including …

• On his fights with Johnny Bench: “Actually, we got along very well.”

• Why he always confused Stanley Jefferson for Shawn Abner: “I felt foolish about that.”

• On having been traded for Vern Geishert and Frank Duffy: “Not much of a story to it. I’m pretty sure it was either a Tuesday or another day.”

• The time he accidentally shaved off his left lambchop: “I mean, it wasn’t the entire thing. But I was reading a magazine, not really paying attention.”

• Life with the 1983 Mets: “A man gets to play with a Joel Youngblood only once in his career. Or twice, I guess.”

• On having placed fourth in the National League in 1976 in stolen base percentage: “I was unaware that happened. But OK. I’ll take the pasta.”

• On having his number retired by the White Sox: “Admittedly, this has yet to happen. But if they called, I’d come.”