The NCAA scam game with “student-athletes” 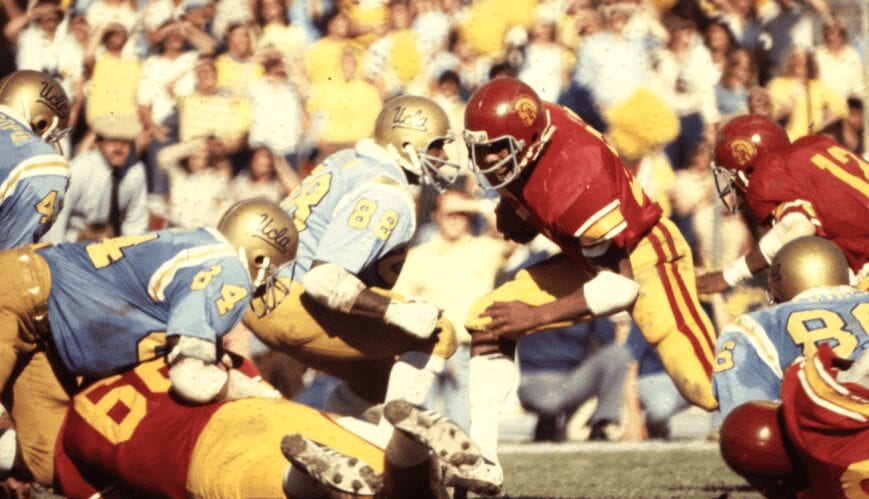 Earlier today I engaged in a pretty heated Facebook debate concerning the recent comments of former Ohio State quarterback Cardale Jones, who ripped the NCAA for taking advantage of “student-athletes” (quotes intended). One of my friends, a former University of Delaware track star named Barry Pollock, made these points. Which I found to be brilliant …

There are two key issues. The first is market interference. We generally have laws to keep from rigging the market and taking advantage of consumers and employees.

The NCAA, for basketball and football, operates as a monopoly. There is no other realistic way for an athlete to make a career as a professional without going through the NCAA (exception given to the rare gifted basketball player). You can say, Well you don’t have to play in the NCAA.” No, you kind of do, because there’s no alternative. Through this they drive down compensation. Players are limited to $20,000-to-$40,000 in annual compensation, which is pretty shitty, especially when you consider what the schools are making off of that. They aren’t making their free market value, but rather, a value that has been distorted due to the monopoly.

The other thing that is occurring is what is called collusion. In business this is when all the companies get together and agree to artificially drive up their prices, or artificially lower their wages. You can tell a player, “If you don’t like what Alabama is paying you, you can go to Texas A&M and see if they’ll give you more.” Except that they won’t, because all of the schools have colluded to agree not to pay more than tuition plus a handful of perks.

Yes, they are getting paid, but they aren’t getting paid what they are worth, and the NCAA is taking everything else off the top.

The reason why they get away with this is because they call them “student athletes.” This is what I was when I ran track and cross country at the University of Delaware. I was an actual student of the school getting an education, and I played sports on the side. The concept of the student athlete is supposed to be taking a team of Delaware’s students and competing against a team of Drexel’s students in a sport. The school makes next-to-no money off of this, and our coach gets paid on the low end of a standard professional salary (somewhere between $60,000-to-$80,000).

That doesn’t remotely reflect what these high-end programs are doing. When you go into the ghetto or a white working-class town, and recruit a bunch of kids who aren’t prepared for college, give them no education, push them through the system with no chance of academic success, all while limiting their compensation while you are profiting off of multi million dollar TV contracts, that’s not a “student athlete.”

The point is, if you are going to violate all of the same laws that we apply to every other business in order to manipulate the market, and justify it as an activity that is only intended to be part of the educational experience, with education being the true goal, then they should actually be required to focus on the academics of these “students.”