I was a pallbearer … 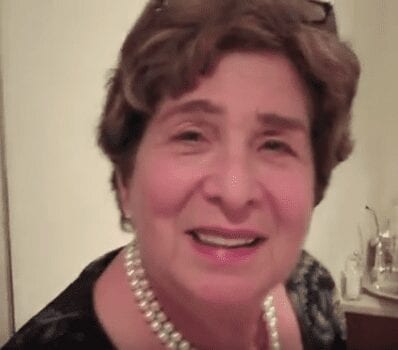 I was a pallbearer.

It was the Tuesday afternoon funeral for Barbara Berdon, my wife’s wonderful aunt, who died suddenly a few days ago at age 74.

I didn’t know I would be a pallbearer. I loved Aunt Barbara, and had a blissful relationship with her. But until I arrived at the synagogue, and was asked by Barbara’s son-in-law whether I’d participate, well, I had no idea.

The service lasted for about an hour, and it was heartbreaking. Lot of tears interspersed between lots of stories of a giving, selfless, charitable woman who was 100 percent about family. When one marries, he never truly knows what comes with the bride. There could be overly intrusive in-laws. There could be mutant children. There could be crazy uncles, stinky siblings, dishonest nephews. Again, you never know. But from the day I wed her niece in 2002, Aunt Barbara has been my aunt, too. She pushed my books upon her friends, asked me about movies and television shows, let me stay in her Florida apartment when I traveled there for work. For my money, the best thing Aunt Barbara did—hands down—was her annual post-Yom Kippur break fast, which always featured a solid 200 bagels, lox, whitefish, cream cheeses, puddings, noodle kugel, pickles, sesame noodles, deviled eggs … on and on and on. It was absolute bliss, and not simply because of the food. Barbara allowed (quite literally) anyone to attend. Cousin in town? Come on over! Your parents have nowhere to go? Bring them! Your pals who aren’t Jewish? Hey, the more the merrier! Her house wasn’t enormous, but it would overflow with conversation, laughter, squealing kids, the scent of pies and cakes and hot coffee.

For years, in fact, I would pester Aunt Barbara about the one thing the break fast lacked. “Where’s the chocolate fountain?” I’d say.

It turned into a running joke.

“You got that chocolate fountain yet, Barbara?”

“How about that fountain?”

There was a box, wrapped.

I opened it. Smiled ear to ear.

Inside was my very own chocolate fountain …

And now, a few hours ago, I was a pallbearer.

As the rabbi concluded the service, I stood and walked toward the coffin with six other men. I wore a blue pinstriped suit and grey tie. My black loafers clicked against the floor. The coffin was wood, with a Jewish star carved into the top. I helped guide it through the synagogue aisle, my eyes locked on the surface. I placed one hand atop the cool wood, the other to my side. I was trapped in some sort of daze, thinking about Aunt Barbara being inside; about the swiftness of life; about how cruel it all is; about how one moment you’re going about your day, planning your next vacation, babysitting your grandchildren—and the next moment you’re eternally gone.

I thought about the last time I saw Aunt Barbara, at my daughter’s Bat Mitzvah in California four months ago. She asked, repeatedly, whether we were happy there, living on the West Coast. Many people gave us crap for moving so far away, but Aunt Barbara seemed to understand. The palm trees agreed with her. The ocean, too.

Today, with tears in my eyes, I was a pallbearer.

I wish I hadn’t been needed.