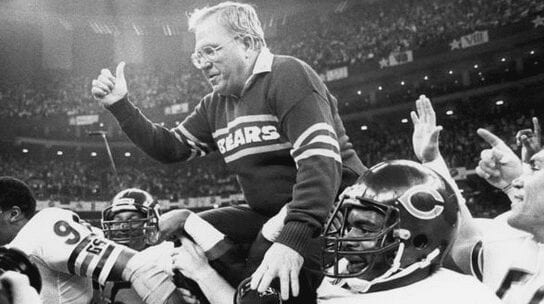 If Walter Payton needed motivation, all he had to do was look around the Chicago locker room, where the fruits of a series of wise drafts were beginning to pay off. “We wanted intelligent people,” said Bill Tobin, who headed the team’s personnel department. “We didn’t care if Mike Singletary was too short or Jim McMahon had an eye problem. We looked for smarts, drive, heart.” The pathetic offenses of Jack Pardee and Neill Armstrong were long gone, replaced by cast of dynamic, talented characters and, in Ditka, a coach excited to utilize them. On defense, meanwhile, coordinator Buddy Ryan had built a ferocious unit about to take the NFL by storm.

In the waning days of the 1981 season, when Halas was preparing to fire Armstrong and his entire coaching staff, Singletary, the rookie middle linebacker, urged his fellow defensive players to send a note to the owner, begging him to keep Ryan. “[Defensive end] Alan Page wrote it, because he had a law degree,” recalled Jim Osborne, a lineman and Payton’s teammate for 10 seasons. “We knew if they let Buddy go the defense would be set back another three or four years. We all signed the letter and sent it off, hoping for the best.”

“When you write something like that, you never know how it will be perceived,” added Page. “We could have been looking for work.”

A couple of days later, Halas met with the entire defensive unit. Most of the men figured they were about to be fired. Instead, Halas praised them for their loyalty. He promised to retain Ryan. Consequently, when Ditka was hired, it was with one major condition—not only did the defensive coordinator have to stay, but he would have final say on that side of the ball. “I was fine with it,” said Ditka. “But Buddy wanted to be the head coach, so he never accepted me. I was thrilled to have someone so talented on my staff. Whether we got along was irrelevant, as long as we could win together.”

The two didn’t get along. They were water vs. oil. Ali vs. Frazier. “The tension existed because they were very similar,” said Al Harris. “They were both hamstrung, hard-headed men who were convinced they alone had the winning formula.” The result of the Ditka-Ryan divide was a pair of units that—when the pads were on—genuinely loathed one another. During practices, Ryan instructed his players to hit, and hit at will. Ditka echoed the order to his offense “Don’t let them walk all over you!” Ditka would yell. “Fuck the defense!”

Although the Bears had failed to qualify for the playoffs in 1983, the team won five of its final six games to evoke genuine optimism. Even Sports Illustrated, which regularly dismissed the team, picked Chicago to win the NFC Central.

“Sometimes a seed has to be planted,” Singletary told the Sporting News. “I feel that, for the past two years, a seed has been planted. I feel it’s grown and ready to reach its potential. Whatever growth it has, it has to be this year.”