The Los Angeles Rams, my son and sport at its best

So we have a friend, the writer Mike Moodian, who absolutely loves the Los Angeles Rams.

He loved them as a kid, he loves them as an adult. He loved them with Jim Everett, with Eric Dickerson, with Flipper Anderson. He even continued to love them when they moved to Missouri, although watching a favorite franchise finally win a Super Bowl halfway across the map can’t be all joy. Mike is, in the truest sense, a Rams guy.

Anyhow, he was obviously thrilled when the team returned out here to Southern California, and when I mentioned wanting to take Emmett, my 9-year old, out to training camp at UC Irvine, Mike anxiously asked what time would be best for him to pick us up.

Well, today he picked us up …

… and it was spectacular.

I didn’t care about the Rams. I truly didn’t. I’m glad they’re here, because it brings greater buzz to the area, but the Rams could be the Colts, the Saints, the Cardinals, the Jaguars. To me, they were simply a team that existed in the NFL. Yet after this afternoon’s experience, well, it’d be hard not to feel a little different.

A weird thing happens when you have children, and it’s this: You see the world through their eyes. It’s a hard experience to explain, but I’ll try: Instead of worrying about, oh, your Facebook status, or that big call at work, or a dinner at a fancy restaurant, you find yourself feeling as they feel. A fifth-grade bully walks by—you hope he trips and drops his hoagie. A cute girl has clearly drawn the eye of your son. You want him to work up the nerve to walk over … to talk to her … to be confident. Your kid is crushed. Well, you’re crushed, too.

I mention all this because today, at Rams camp, I felt through Emmett. Earlier in the morning I took him to the mall for a Rams cap, so he’d have something to be signed. Once we stepped onto the UC Irvine campus, the three of us began by walking around, watching the workout, trying to see what Jared Goff had on his fastball, looking for Todd Gurley cutting through the hole. Mike told us the team does this thing for kids, where they set up an autograph tent with certain players. You need a token to attend, and Ram staffers supposedly cruise through the stands, randomly distributing them to youngsters. Emmett kept his eye out for tokens, but quickly lost hope. However, midway through the session Mike noticed Vince Ferragamo was standing nearby. Emmett, to his credit, is one of America’s seven 9-year-olds who knows the name Vince Ferragamo. The reason: Back when I was 9 or 10, my Grandma Mollie and Grandpa Nat bought me a No. 15 Ferragamo Rams jersey at the mall. It was my first-ever football shirt, and I’ve told Emmett the story myriad times.

Anyhow, the three of us approached, but Emmett looked a bit shy. “Vince,” I said, “could you sign my son’s hat?”

He did so—and Emmett beamed. He was beyond thrilled.

We cruised over to the back of the facility; a stretch where players had to pass to leave the field. There were a bunch of fans already gathered, and I asked one—a man in his 40s—whether it was a good spot for my son to engage with some players.

He extended his hand toward Emmett, and handed him one.

Once again, Emmett was beaming.

Players started passing. There were about 30 people in front of us, so I lifted the boy onto my shoulders. Chase Reynolds, the fourth-year running back from Montana, stopped and began to sign. Emmett had no idea who he was. Neither did I. However, another man—also in his 40s, also in front of us—looked at Emmett and said, “Lemme have the hat.” Emmett looked down at me, and I nodded approvingly. The man pushed it toward Reynolds and said, “It’s for that boy up there.”

Tavon Austin followed minutes later, and another guy motioned the hat forward. A signature followed. Then, a big offensive lineman walked by. He removed one of his gloves and threw it to a fan. He spotted Emmett, took off the other glove and tossed it to him. A teenager to my right stepped in and intercepted. “Look what I have!” he bragged to a friend.

“Um,” his pal said, “he was throwing it to the little kid on the man’s shoulders.”

He handed it to Emmett—his very own sweat-soaked white Nike practice glove from an unidentified player!

Ten minutes passed, and we walked by a security guard and to a tent, where the entire Rams defensive line sat in chairs behind a table. There were, oh, 60 kids waiting, and when I went to step forward with Emmett an employee said, “Sorry, but you have to stay here. It’s only the kids.”

Without a moment’s pause I said, “That’s awesome!” And I meant it. Adults ruin this stuff, and I could picture plenty of overzealous fathers asking for a second … third … fifth signing; or explaining to Robert Quinn how he needs to use his left; or offering stock advice. Seriously, “no adults allowed” should be a sports mantra.

I stood behind the line and watched Emmett go player to player, holding out his hat, saying, “Please” and “Thank you,” grinning like he just won the Christmas lottery. A few moments later, he serendipitously walked past a fence where Gurley and Kenny Britt were signing. It could not get any better. 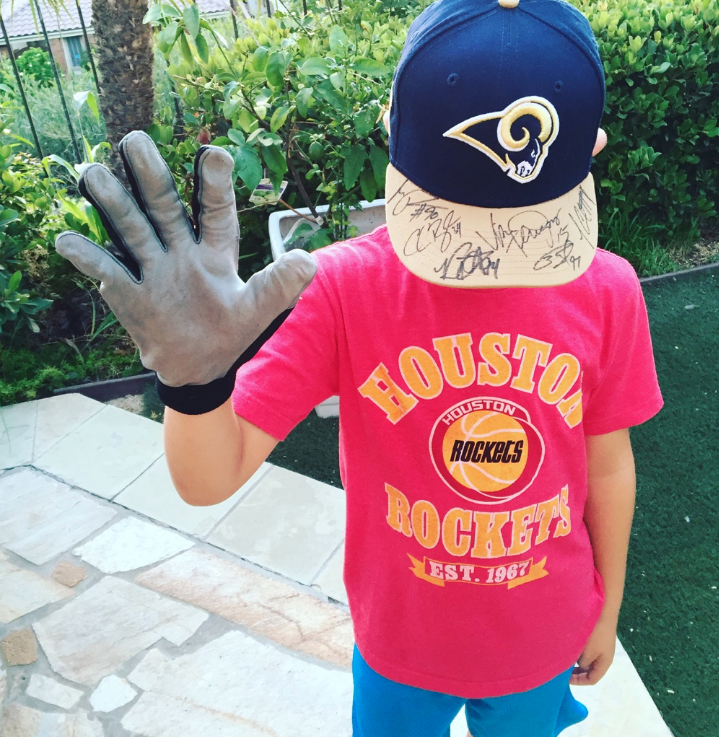