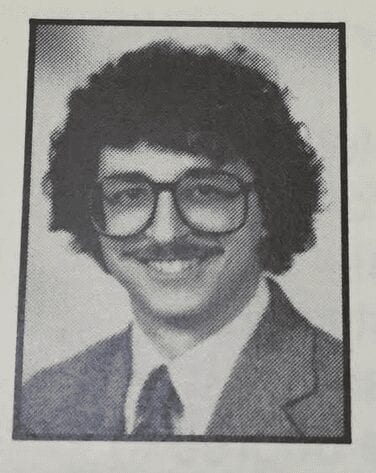 A couple of days ago I received one of the greatest packages of all time.

It cost me $35, which is a bit steep. But when you’re researching a book about a long-dead league, and you find a long-dead media guide … well, you jump on it.

The 1985 Portland Breakers media guide is my catnip.

First, the team was only in Portland for a year, and it wasn’t very good. The two quarterbacks were Matt Robinson, the NFL journeyman, and Doug Woodward, who had played at Pace University. Marcus Dupree was supposed to be the star, but he killed his knee in the second game and never returned. Attendance dwindled, media coverage petered out and the USFL quickly died.

Second, I’m a sucker for old media guides. I really am. The names, the obscure colleges, the player bios.

Third, I’m also a sucker for dated photos. Which is where Brian Feldman comes in.

According to the 1985 Portland Breakers media guide ($35 online), Brian Feldman was the team’s director of customer relations. Which is cool. But what’s really cool is Brian Feldman’s 1985 mugshot. It just oozes the era—the big-ass glasses, the Jew Fro (one I envy, but lacked the proper hair consistency to grow), the Matlock mustache. I can’t tell you how in love I am with Brian Feldman’s 1985 Portland Breakers media guide mustache, except to say that, within an hour, I:

• 2. Tweeted something like, “In 1985 Brian Feldman was the motherfucking man.”

This was clearly done with humor and joy, sans even the slightest effort to mock in any real way. I mean, it was the 1980s. And the 1980s were fantastic. And the mustache! And the Jew Fro! And … and …

I received this Tweet, from a former baseball writer named Joe Sheehan. He clearly did not enjoy my handiwork …

I was pretty taken aback. “Dumbfuck”? Really? For … that? But then I thought, “Well, maybe Joe just had a bad day, or maybe it rubbed him wrongly, or maybe Brian Feldman still has the glasses and the mustache and the Jew Fro.” So I did something that I don’t mind doing: I apologized. I got Joe’s number from a colleague, sent him a text (never got a reply), said it wasn’t anything intentional. I took the image down, felt genuinely guilty.

I spoke with the wife about it later that night, and she asked why, exactly, I had apologized. The photo was funny. Clearly there was no malice. I agreed. “Dumbfuck” seemed a tad extreme, especially toward a person you don’t know. But Twitter is Twitter, and anger is anger, and Jew Fros are Jew Fros.