I Was There! (a book excerpt from Eric Mirlis) 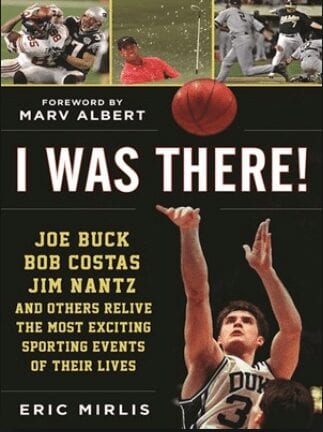 In “I Was There!”, I interviewed 65 sports broadcasters and writers about the Top 5 moments they have seen in person. It was a great experience, and I was lucky enough to hear some of the great storytellers in sports share their personal experiences from each event. While it was predictable that people like Bob Costas, Joe Buck, Jim Nantz, Bob Ryan and others were going to talk about marquee events that everyone knows, the coolest part of the process was hearing stories that were off the beaten path.

There are two in particular that really stood out to me and that put a slightly different spin on things. In both cases, they are events most sports fans know, although people are only familiar with one of them through a fictional account. Here are two excerpts from “I Was There!”—the first from Terry Gannon, the other from Jeremy Schaap.

Rudy Ruettiger is a life-long friend of mine, and our families have been close since I was born. My dad coached him in high school, as well as some of his brothers, who were champion wrestlers. My father had season tickets for Notre Dame football as long as I can remember, and I went to every game starting when I was five years old until the time I left to go to N.C. State.

We were living all of Rudy’s story with him. When he was going to Holy Cross, my dad would give him twenty dollars every weekend so he could try to get into the games, and afterwards, we would go out to dinner, and he would constantly tell us (and anyone else who would listen) about how he was going to play football at Notre Dame. We would always humor him and say “Yeah, yeah,” just thinking it was one of those ideas that Rudy always had. Damned if he didn’t make it happen, of course. I would actually stay with Rudy in what was a little closet at what is now the Joyce Center, but was serving as his dorm room, during football weekends, and he would sneak me out and shoot hoops with me on the arena floor in the middle of the night when the security guard wasn’t watching.

The weekend of the game he played in, I was there in the stands as the student body started chanting his name until Dan Devine eventually put him in the game, and, just like in the movie, where his family was going nuts, that was us, part of his extended family. Yes, he did sack the quarterback on the final play, just as the movie said it happened. If anyone wants to argue that, I would argue with them to the death. I witnessed it.

After the game, I went into the locker room, and Rudy said, “Here, take this with you.” He then handed me a Notre Dame helmet, which I proceeded to take and wear around the neighborhood while playing sandlot football. Years later, it was stored in my mother-in-law’s garage, and she called me to tell me she’d found this helmet that I had forgotten about. She was going to throw it out, but I made sure to stop her, and it is now on the mantel in my office at home. A couple of years ago, I called Rudy and told him about the helmet, so that he knew I still had it, but he told me that he had the helmet from the game and that mine was a different one. To be honest, though, neither of us really knows which the right one is. I’m not sure to this day. All I know is that he has a helmet and I have a helmet, and one of them is the one he wore in the game.

We all know what happened: Bucky Dent homered to lead the Yankees over the Red Sox in a one-game playoff after trailing by fourteen games in July, earning a profane nickname (at least in the Boston area) in the process. I had just turned nine years old and was a crazy Yankees fan. That was the first season where I really followed the team every day, and it was a special treat to go with my father to Boston for the game. We flew up on the Eastern Airlines shuttle on the day of the game. During the flight, I was sitting next to American League president Lee MacPhail. I was a big baseball fan, but didn’t know who he was at the time. We spent the flight just talking about baseball, which amused my father. At Fenway, I was too young to sit in the press box, and my father had not secured any tickets. So he was asking the players around the batting cage if anyone had any tickets he could use. One of the players wasn’t using his, and that’s how I ended up sitting in Bucky Dent’s seats when he hit his famous home run.

I had never really experienced being in enemy territory, and from where I was sitting up in left field, I couldn’t really tell if the ball was fair or foul. Of course, the Red Sox fans didn’t react to the home run, and since I was accustomed to a Yankee homer being greeted by thunderous applause, I thought it was a foul ball. Then I realized what it was, and went crazy … until I realized that even being nine years old didn’t really protect me from the wrath of the home fans. It was a great moment, and I got to spend it with my father in Bucky Dent’s seats. Whenever I see Bucky, we still talk about it.

“I Was There!” is available on Amazon and in a bookstore near you.

PrevPreviousThe death of a neighbor
NextVanilla with the nine …Next