When you know a star 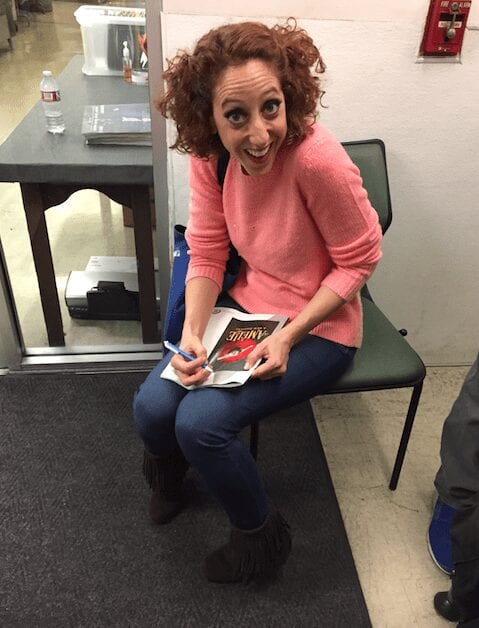 The wife and I know a star.

Her name is Alison Cimmet, and she’s currently appearing in Amélie here in Southern California at the Ahmanson Theatre (the show transitions to Broadway early next year). We’ve been friends with Alison for more than a decade, dating back to when we all lived in New Rochelle, N.Y. Our kids are (roughly) the same age; the wife and Alison once co-hosted a garage sale; there were kiddie birthday parties and play-dates and etc … etc. In fact, earlier today I asked the wife where she’d place Alison among her all-time favorite people and she said, without pause, “Very high.”

Anyhow, tonight the kids both had sleepovers, so we drove to Los Angeles to catch Alison in action. The show, in and of itself, was terrific. I’d seen the film when it first came out in 2001, and the live production was (for my money) every bit as good. It was charming, detailed, lovely, engrossing. The set design was magical; the audience response nothing short of terrific. I won’t spoil the experience for those who plan on going, but the stuff with the goldfish … brilliant. Simply brilliant.

That being said, a great show turns into something extra special when you know a cast member. I am certainly not as close with Alison as the wife, but to see her up there, standing before hundreds, transforming from a woman you know to this character … well, it just really does something to a person. When we first met Alison, she was coming off of a appearing in a widely seen Staples ad on TV. I remember seeing Alison on the screen, thinking, “Holy shit! That’s too cool!” In hindsight, though, her ensuing success blows that away by 100,000. She’s been on Broadway multiple times, in shows ranging from Baby it’s You! to Bonnie and Clyde. She sings, she dances, she emotes, she contorts.

She doesn’t act like a star, but she’s a star.