Why celebrities often turn into assholes 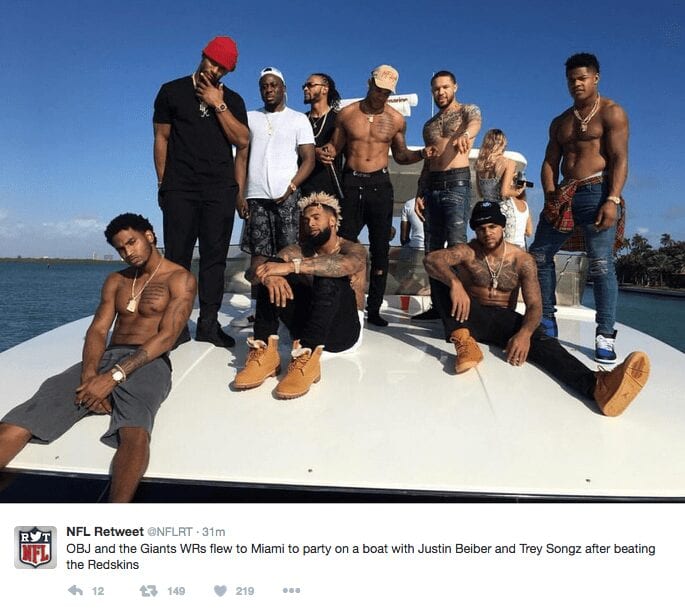 So I was skimming through Twitter a few seconds ago and came upon the above image and Tweet. And it screamed to me, in a very real way—THIS SHOWS HOW AND WHY CELEBRITIES TOO OFTEN TURN INTO ASSHOLES.

I’ve seen it a gazillion times by now, often up close. It transcends all lines of class, of race, of upbringing, of position, of status on a team. It simply has to do with the corrupting glow of the spotlight, and the world convincing a person (or people) that the ability to catch a football, or sing a song, or act as another would act, denotes upon you the greatest of importance.

I think of Mariah Carey, who long ago burst onto the scene by singing “America the Beautiful” before an NBA Finals game. She was young and awkward and a bit frumpy, and I’m also guessing she was friendly and eager and thrilled to be invited. Hell, take a look. But now, when I hear her speak and degrade others, I always think the same thing: What the fuck happened to you, you arrogant, dismissive creature?

The answer: She became famous, then started to believe the hype.

That’s what the above photograph screams to me: We’re famous, and we believe the hype.

But here’s the thing about fame and hype—it vanishes quickly. Odell Beckham is “OBJ” because he’s great and electric and playing in New York. But as soon as he blows his knee out, he’s Odell, the guy with the limp and the non-diploma who once was. He’s sitting at a table in the Jefferson Valley Mall, signing autographed 8x11s next to Billy Ard and Terry Kinard. He’s calling his agent, but never hearing back. He’s being turned away at the SI Swimsuit Party. It’s an all-too-common story, and it transcends mediums. Where’s Chris Kirkpatrick from ‘Nsync? Where’s Super Joe Charboneau? Where’s Ja Rule? Where’s Herman Moore? Where’s Shawn Colvin? Six years ago Jermichael Finley is looking like the next Kellen Winslow. Today he goes unrecognized at the Green Bay iHop.

It’s when you start to believe the hype, and start forgetting that hype, like the ocean mist, fades quickly.