Otherwise, he was just a guy. Which is nothing to sneeze at.  Sturtze spent 12 years in the Majors, bouncing from the Cubs to the Rangers to the White Sox to the Devil Rays to the Blue Jays to the Yankees to the Dodgers. In his best season, he appeared in 64 games for the Yankees, posting a 4.73 ERA. In his worst year, we went 4-18 with a 5.18 ERA as a starter in Tampa. In short, he had a baseball career one should be proud of, but also a baseball career that didn’t open himself up to much public scrutiny and intellectual inspection.

This, apparently, is a good thing.

For a reason I don’t fully understand, Tanyon Sturtze and I are Facebook friends. I don’t recall how this happened. I might have spoken with him once, perhaps while writing the 2001 Devil Rays preview for Sports Illustrated. That’s a guess—it’s also possible we never exchanged a word.

Yesterday afternoon, in a typing spree as wild as his 2002 season (he led the league in hits, earned runs allowed and walks), Sturtze set out to defend Donald Trump’s exciting new immigration ban. Here, without a word changed or sentence altered, is what he brought the world (and, frightening beyond belief, his diatribe generated 17 shares) …

? let me ask you snowflakes a question when someone bombs the Boston marathon or someone shoots up a nightclub in Orlando or someone flies two fucking jets into the WTC etc etc etc who claims responsibility for those actions? No not Russia, no not the Irish, no not Japanese, hmmm not even Germans wow we can keep going but guess who does? the Muslims do my friends they don’t believe in our way of life God no God whatever, Whether you say all are bad or not they are the problem and until we figure out how to protect our citizens gay,white,black, Chinese whatever Ban them!! I read all you peoples post since the election and I haven’t commented on anything because I want trump to prove shit to me also and I think it’s your right to bitch, but this I don’t understand how people can be upset about??news flash people THEY DONT LIKE US.. So if this ban stops one cousin or one uncle or whatever from coming here and making a suicide bomb then I am in 100%. I find it funny one of my liberal friends posted today he was nervous about going into NYC because of the retaliation from this ban? Lmao you just answered why the ban should be in place, If they are such great people and do nothing wrong then why would they retaliate and why would you be scared to go anywhere? Everyone needs to stop stirring shit up just because it’s not your way of thinking, because guess what your not always right and your beliefs are not the same beliefs as everyone else. Ok rant over please proceed liberals with your way of thinking because I must be wrong, I can’t possibly think for myself and you must be right.

There are so many things that bother me about this, so I’ll just touch on a few:

• The seven-nation ban includes none of the nations involved in 9.11. Why? Because those are countries where Donald Trump has longstanding business ties. (as one of your followers wrote: “What do the terrorist countries have in common? They have Trump hotels.“) So all this bluster about “two fucking jets into the WTC”? This ban wouldn’t have done shit to stop it. Wouldn’t. Have. Done. Shit. 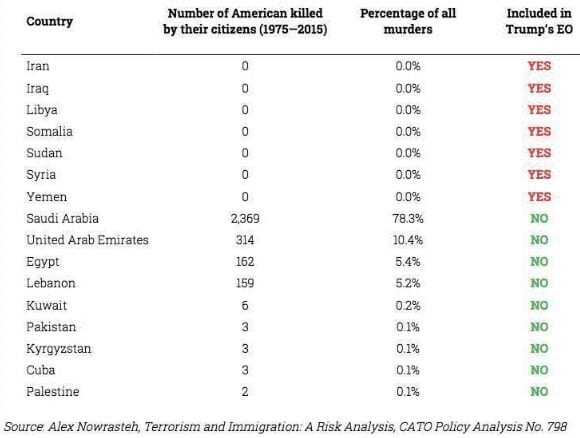 • If you REALLY want to protect our citizens from the greatest threat, wouldn’t you first take action on unfettered access to guns? Do a quick Google search for American (legally purchased) firearm deaths v. terrorist deaths. I dare you.

• Who is “They,” asshole? One of my daughter’s best friends is Muslim. Is it her? Her parents? Her grandma is about to visit the United States next week for the first time in a decade. Is it her? Should we ban her?

• This isn’t a liberal v. conservative thing. I disliked Ted Cruz, I disliked Marco Rubio, I disliked Jeb Bush (and I actually really love John Kasich)—but they were reasonable men whose beliefs were based upon legitimate (though flawed, in my opinion) ideas. Trump’s plan isn’t based on research, on logic, on fact. He’s not only banning immigrants from seven nations that have caused … wait for it … ZERO domestic terror attacks over the past two decades, he’s ruining the reputation of this nation. Does President Business Genius believe this is going to open up the world markets to America? Does it help our economic priorities in any possible way? Isn’t that why he was elected—jobs, jobs, jobs. This is a job-killer, times 1,000,000.

• Beneath Donald Trump’s bluster is Steve Bannon. Bannon is evil.

PS: The comment from his page that gave me the most chills …