Satan masquerades as an angel of light 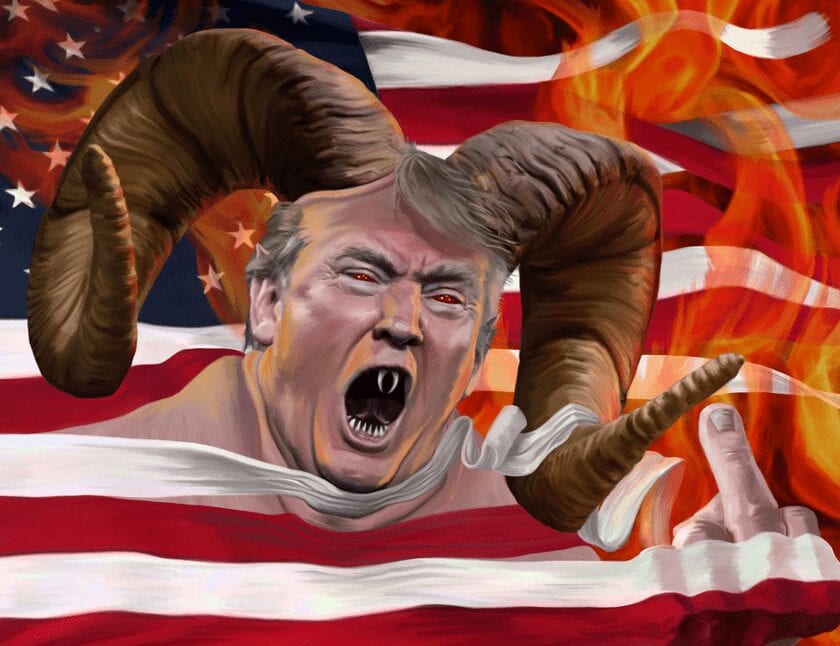 “Patriotism demands the ability to feel shame as much as to feel pride.”

If you’ve spent enough time on this earth, either attending church or listening to sermons on am radio or even seeing movies or television shows that concern Christianity, you’re surely familiar with the sight and/or sound of a revved-up minister or priest or pastor warning his flock of the devil in disguise. Oftentimes the reference points specifically to 2 Corinthians 11:14, which translates to, “And no wonder, for Satan himself masquerades as an angel of light.”

The thing is, most of us don’t take these things seriously. Oh, many of us pretend to. We nod, clap, bow, cry. We adhere and promise and proclaim. But, come day’s end, are we truly concerned with Saran himself masquerading as an angel of light? No. Why? Because faith is largely based up selective ease. We take what we want to take, ignore what we want to ignore. The idea of Dad up on a cloud with Aunt Stacy and Uncle Joe? Terrific! The idea of the devil walking among us? Eh … I’ll pass. Too hard.

I bring this up because, as of earlier today, I am 100-percent convinced (sans exaggeration) that there is a Satan in America, masquerading to some as an angel of light. If one pays attention, this Satan has shown himself for the past year or so, spreading lies and hate and venom unlike anyone we’ve seen in the modern United States political system. He is an expert at sucking people in, preying upon their fears, exploiting their vulnerabilities, convincing them that deceit, that fraud, that mocking, that ridicule … all are acceptable.

Today, more than any other day, Satan genuinely revealed himself. In an act of unrivaled xenophobic ugliness, he—to cite the Washington Post’s Carol Morello—”signed an order … to suspend admission of all refugees for 120 days while a new system is put in place to tighten vetting for those from predominantly Muslim countries and give preference to religious minorities. Trump said that the goal is to screen out ‘radical Islamic terrorists’ and that priority for admission would be given to Christians.”

Or, perhaps, we were.

Satan is here. I am telling you, Satan is here. He is turning us ugly and calculating and divisive and prejudices and cowardly. He, himself, knows nothing of the Bible he cites. He, himself, is as Christ-like as a 7-Eleven urinal. He, himself, has cheated on wives, robbed the working class of their wages, lied under oath. He, who calls the press dishonest, devoted five years to his “proof” that Barack Obama was a Kenyan Muslim. He, who mocked POWs for being captured, received five (count them—five) deferments for a foot injury that still allowed him to play football. He, with the Jewish son-in-law, counts as his top adviser a man with a history of anti-Semitic venom. He has never shown an ounce of empathy, of compassion, of charity, of understanding.

And now he, disguised as a man with empathy, has said America will: A. Block the suffering from entering our sanctuary; B. Ease that blockage based, first and foremost, on a devotion to Jesus Christ.

So, I ask, where are our voices? Where are the Christian leaders who speak of 2 Corinthians 11:14 on the job, but ignore the reality when it presents itself? Where are the churchgoers who promise to love the lord, then turn their backs when Satan shows himself as “an angel of light.” Where is the disgust from those who voted for Donald Trump because they thought he’d deliver jobs, only to learn he is a xenophobic, racist nightmare?

I am not religious.

I rarely attend synagogue or church or mosque.

But I know Satan masquerading as an angel of light when I see it.