My day with Eugene Alan Triplett 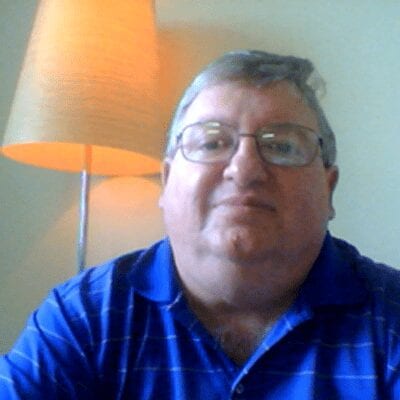 This is Eugene Alan Triplett.

I know almost nothing about him, other than he’s been on Twitter since 2014, he has 373 followers and he’s very conservative.

I have absolutely no beef with Eugene, and I’m not writing this to mock or make fun or demean. I mean that. In truth, I’m writing this because I think people in my shoes (far left, furious over Trump, non-religious) need to try and understand that folks out there don’t always share out beliefs. Or, to be more precise, that while our world view may well feel sound and concrete, there are others—like Eugene—who have a 180 perspective.

Today Eugene and I engaged in some Twitter banter. Mostly, he Tweeted and I read, then some others jumped in. Here’s much of what unfolded … 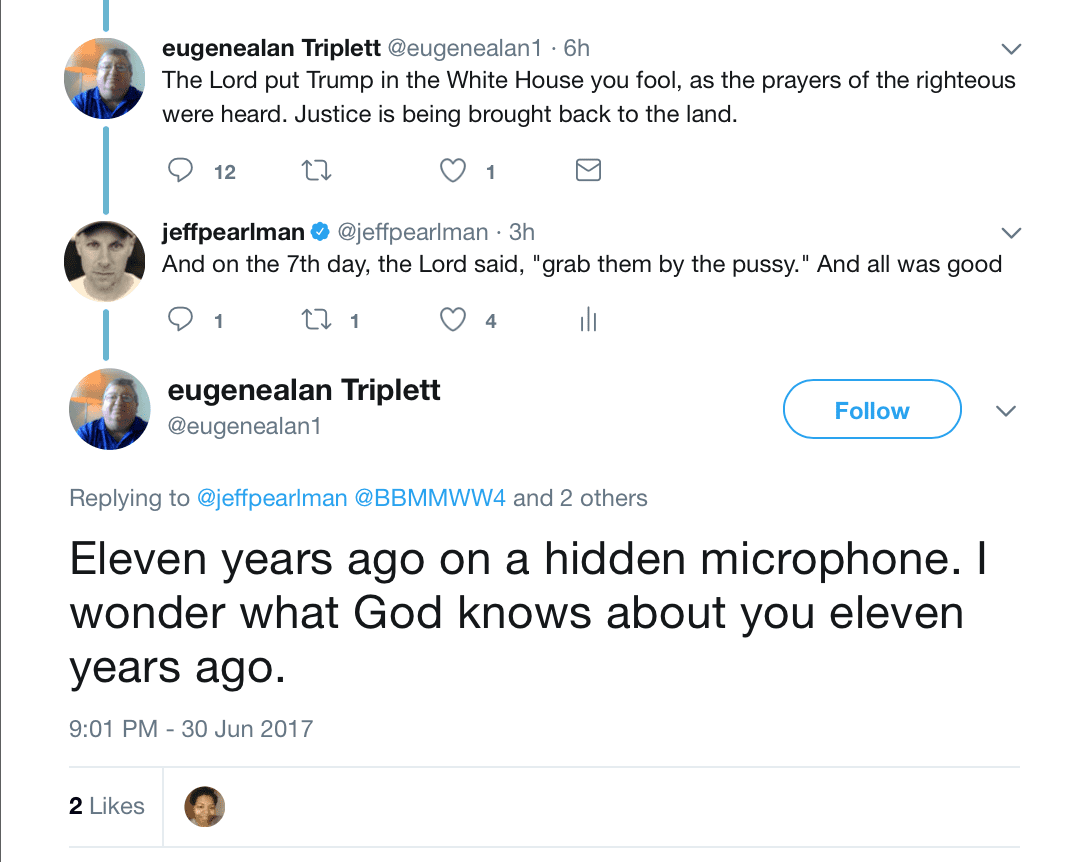 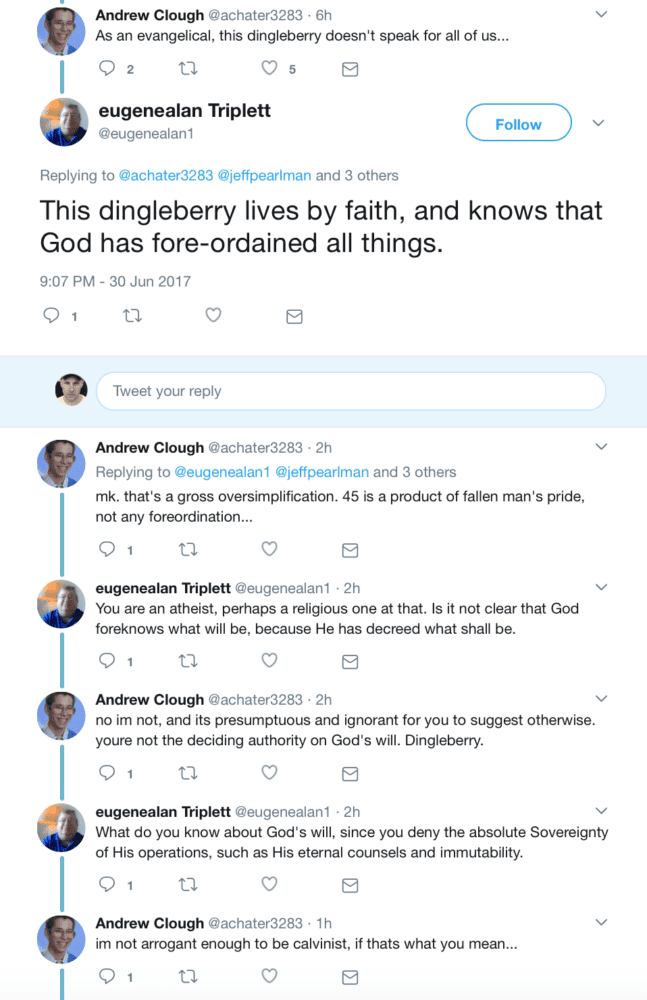 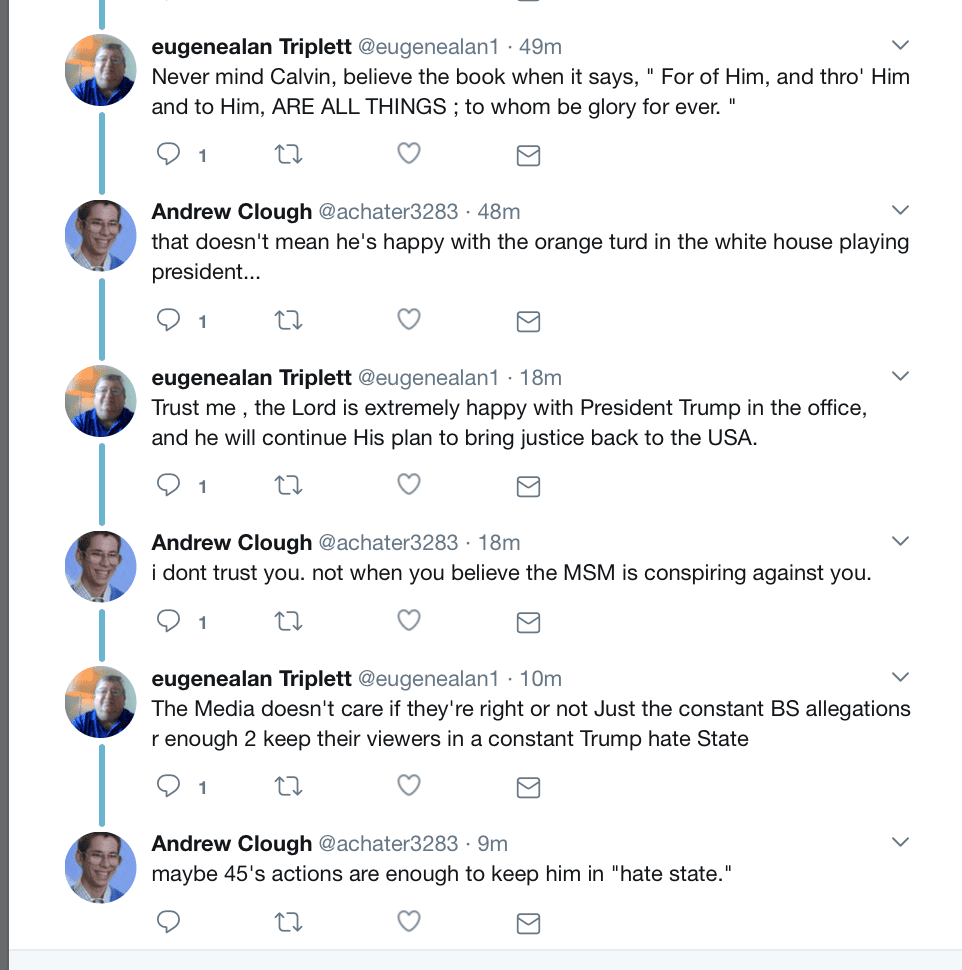 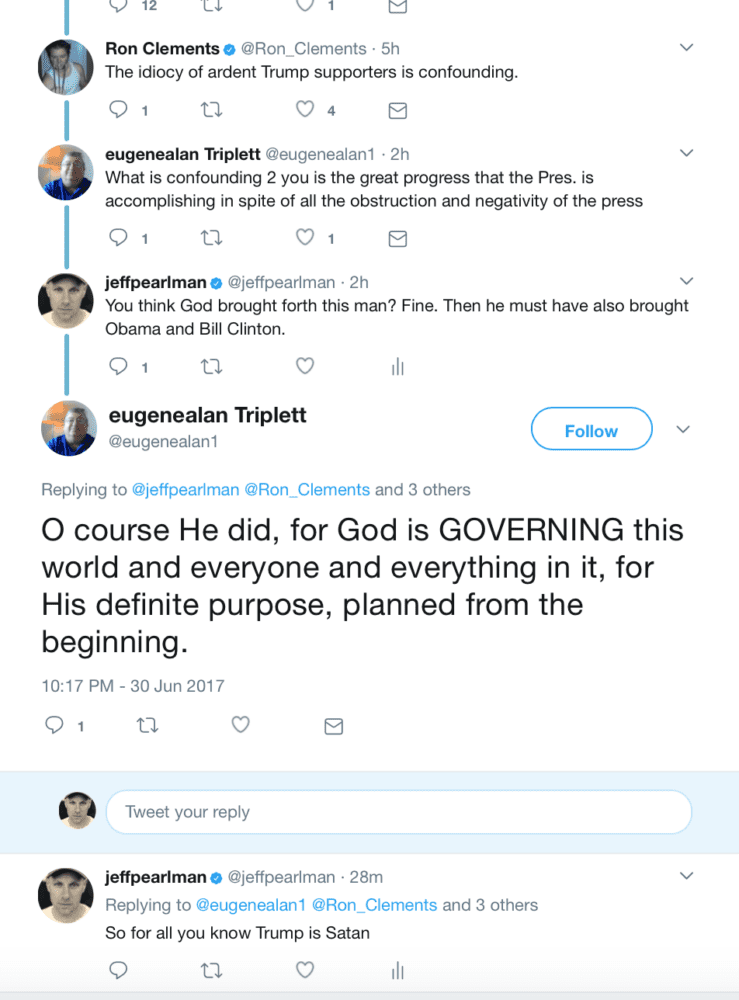 Anyhow, you get the idea. But here are a few things that still swirl in my mind:

C. If one believes Barack Obama could have been brought here by God, isn’t it equally possible Trump is the black angel of death?

D. If Trump is so angelic, and the press is so #fakenews, why was it OK for Trump to devote four years to spreading the false information that Barack Obama was a Kenyan-born Muslim? How is that kosher, considering we now all know—with 100 percent certainty—it’s a lie?

E. Why are so many evangelicals willing to give Trump as a pass on his bragging about sexual assault? Why do they act as if, hey, we all have skeletons? Yes, I have skeletons. I once took four of my parents’ wine coolers and drank them behind the house. Yes, I had sex without a condom. Yes, I farted in my uncle’s bathtub. I have never, however, raped a woman or bragged of raping a woman.

F. Why do people like Eugene keep posting stuff like this—without at least fact checking the information first? 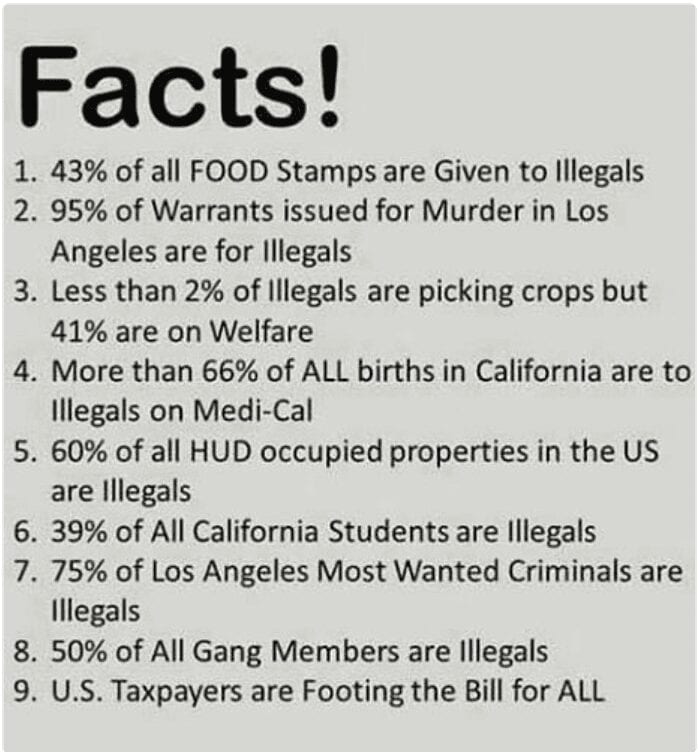 This is what really gets me. I took the above info box from his Twitter feed; the same feed that vents every five seconds about #fakenews. But here’s the thing, Eugene—this shit isn’t difficult to check. Here, someone did it for me.

• No one seems quite certain where the “66 percent of all births in California are to illegals on Medi-Cal” comes from. According to the latest available figures, 48.2 percent of California births were to mothers of Hispanic/Latina descent. Now, even if all 48.2 percent were illegals, we’d still be far below ol’ Eugene’s figure. But, at most, maybe … 30 percent could be illegal. So … yeah.

Hell, I can go on and on. But here’s the problem—even were I to go on and on, evangelical Eugene and his pals wouldn’t budge. That’s the problem these days, what with Facebook and Twitter and cute little boxes. We believe what we choose to believe; we see what we wish to see.

Even when we’re dead wrong.