When the Earth Stood Still for 66 Years

My dad, the great Stanley Pearlman, recently watched The Day the Earth Stood Still for the first time in eons. Here’s his take on a classic …

I finally got around to writing this movie review after 66 years.  No problem. Things have not changed much. The film is the 1951 sci-fi classic, The Day the Earth Stood Still, starring Michael Rennie and Patricia Neal. I saw it on Netflix.

Klaatu, a visitor from outer space (Rennie) lands his craft in the nation’s capital to warn about the potential of nuclear weapons reaching beyond the earth to threaten other planets. He is accompanied by Gort (played by Lock Martin), an eight foot robot with the power to destroy the earth if necessary. Although Rennie owns the part and only he can be imagined as Klaatu, Claude Rains was the original choice. He made his American movie debut in The Invisible Man, but no one remembers seeing him in it.

As the peaceful, soft-spoken Klaatu disembarks from his craft, he is immediately shot by a panicky soldier. He is taken to Walter Reed Army Hospital under lock and key, where he states his mission as wanting to simultaneously talk to all the world leaders. The President’s representative makes clear that they do not even talk to each other.

Klaatu leaves his hospital imprisonment to go out among the ordinary people and determine their character. (Walls are no obstacle to this alien.) Using the name Carpenter, he lands in a rooming house with single mother Helen Benson (Neal) and her son Bobby. 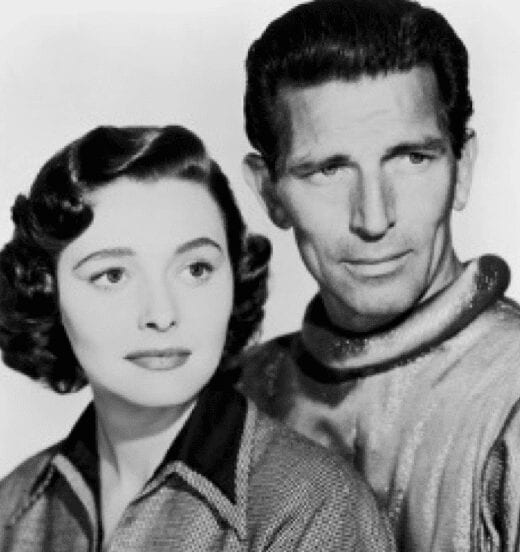 Unable to reach the world leaders, Klaatu hopes to bring the earth’s top scientists together, with the help of the renowned Professor Jacob Bernhardt (Sam Jaffe). Meanwhile, the entire city is frantically searching for Klaatu. As the incognito Klaatu/Carpenter is eating breakfast with the other boarders, the social media of the day spreads unfounded rumors of a hideous monster with tentacles, in the newspapers and on the airwaves.

In Bernhardt’s study, Klaatu reveals his identity, and the professor dismisses a military officer protecting him. The alien says “you have faith professor.” He responds with the memorable line, “It is not faith that makes good science, it is curiosity”

As the story advances, Klaatu is forced to reveal to Helen Benson his identity and mission, disclosing that without her silence and help, the earth will be destroyed. Helen’s fiancé, Tom (Hugh Marlowe), discovers the secret and calls the authorities despite Helen warning him that the planet will be extinguished. Tom’s ego is all that matters to him, “Who cares about the rest of the world, you will see my picture in all the newspapers.”

Ultimately Klaatu meets with the scientists and issues his warning, concluding “We will await your answer.”

Either they are still waiting after 66 years, or the other planets have decided that we can destroy ourselves without outside help.

After reading the script, the army refused to participate. So the National Guard was called in to save the day. Many extras were employees of the FBI.

Some cite religious parallels with Klaatu as being a Christ-like figure. One change that was insisted upon by the censors, feeling that it was too left-wing, was in a scene where Klaatu is resurrected after being killed by the military. He had to explain that his revival was only temporary, and “that power is reserved for the Almighty Spirit.”

Sam Jaffe had to fight the stigmatizing blacklist to make this movie, and it was years before he made another one.

This sparsity of special effects is what makes the movie so enduring. It is all about the message and in that respect it is still timely.

PrevPreviousIs Will Smith a great rapper or a hack?
NextDear White Supremacist Marchers …Next