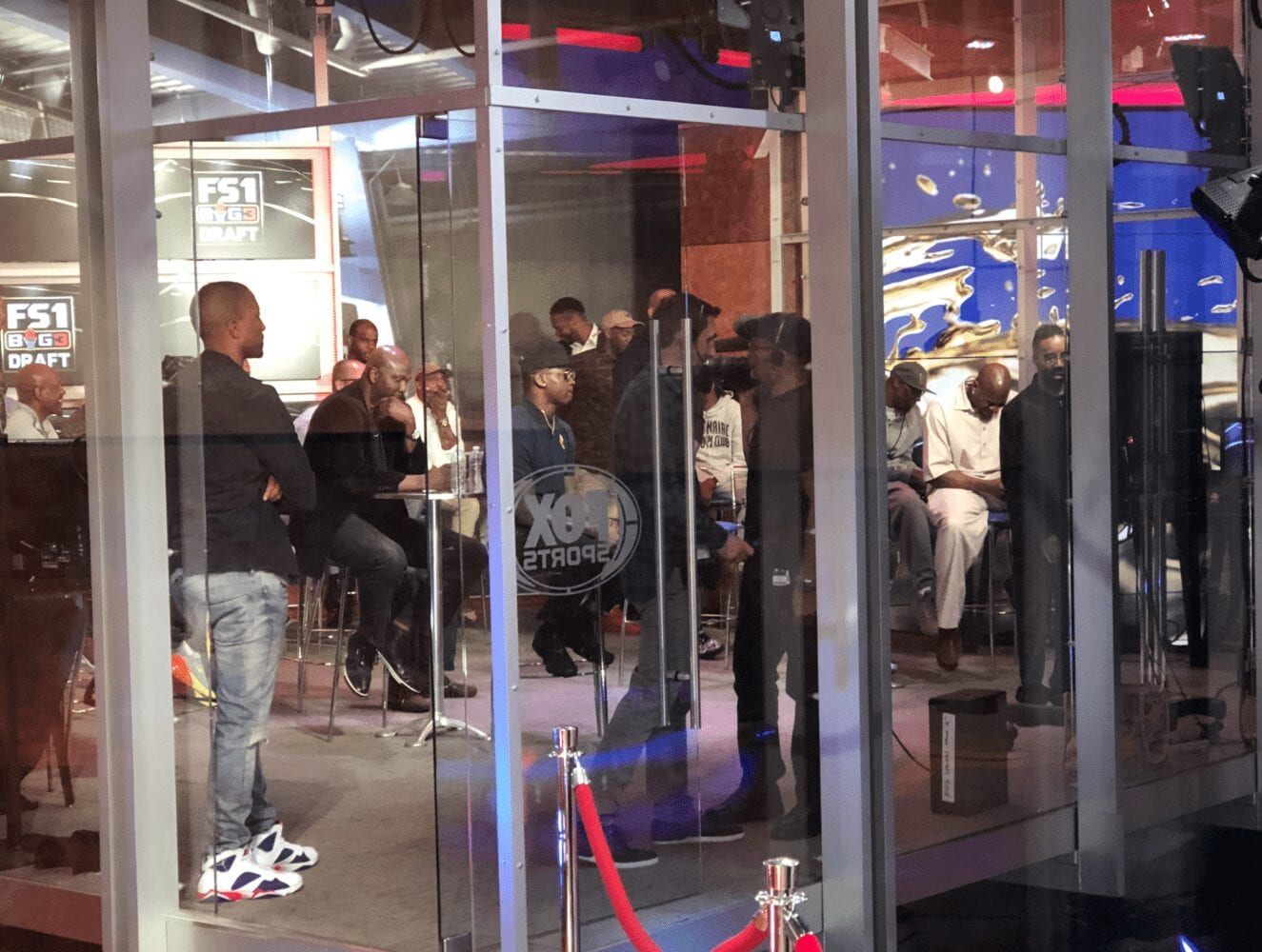 I have visited the saddest place.

It is the above photo—back in the glass room at the Big 3 Draft here in Los Angeles.

I covered the event tonight, and found it quirky, interesting, weird, funky, unique. The majority of selected players were names I’d never before heard, or names that rung slightly familiar. So, mazel tov to Mike James and Salim Stoudemire and Corsley Edwards and Andre Emmett, who were among those called from the glass room to earn a reported $100,000 salary to play three on three this summer.*

But why, oh, why, did the Big  3 feel compelled to invite some 70 (or so) veteran ballers to attend a draft where only 18 names would be called?

Honestly, it felt wrong. And depressing. The draft was broadcast live on FS1, and while I can’t imagine many people watched, there was something pointedly disrespectful about the whole spectacle. Or, put differently: Hold your draft, have your fun, sell your product, hype what’s actually an enjoyable and shockingly high-flying league. But why put so many NBA retirees through such utter indignity? It was, truly, heartbreaking to see ex-Laker Smush Parker (you can spot him in the above photo—wearing sunglasses and a baseball cap) waiting … waiting … waiting. It was, truly, heartbreaking to observe these once-powerful entities meekly checking their cell phones, pretending not to care. It was, truly, heartbreaking, to realize that some of the guys need this. Need the $1,000. Need the attention. Need the buzz.

In the immediate aftermath, the vast majority of those who went unselected slunk from the Fox Sports building with nary a whimper. Men like Ruben Patterson and Jannero Pargo came and went as if this never occurred. Yet others were clearly bothered. Terrence Williams, the one-time Louisville star, complained (and cursed) loudly about the “bullshit.” Another longtime NBA veteran told me the whole thing was a setup; that friends were going to pick friends.

Is he right? Probably.

Was this event righteous? Not really.

Some other quick observations:

• Quentin Richardson, the 38-year-old former Clipper, was drafted—and he looks like he could jump into an NBA game right now.

But the league probably needs to learn to spell his name …

• The star of the night was Michael Rapaport, who served as the quasi-MC. He was funny, goofy, laid-back. It worked well.

• Bonzi Wells got pissed off at me. I wanted to speak to him for a book project, and after he was drafted we were introduced. I told him what I was working on and he said, curtly, “I don’t wanna talk about that. I just want to talk Big 3.”

I said, “Fine”—and walked off. Honestly, after all these years in the business, I was just sorta fed off.

Anyhow, about 25 minutes later I was talking to Jermaine O’Neal and Wells said to him, “Don’t talk to this fool.”

“You say something?” Wells replied.

“I didn’t like the way you talked to me before,” he said. “I was told you wanted to talk Big 3, then you asked me something else.”

“Not a problem,” he replied.

• Hooooooly shit—the league had the best cookies ever. I wouldn’t recognize Corsley Edward in a crowd, but I know a good chocolate chunk. And, damn.

• I will not confirm or deny that Clyde Drexler missed the opening moments of the telecast because he was in the bathroom.