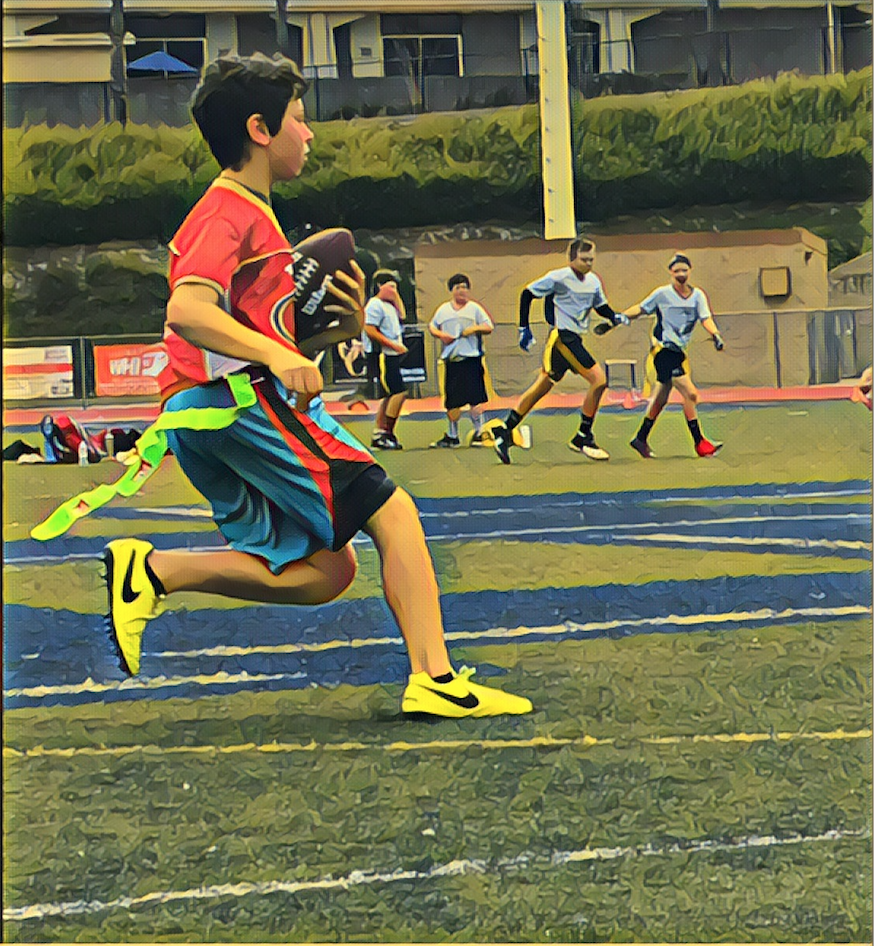 So those who read this blog with any regularity know that last week I made my flag football head coaching debut (well, I filled in for Chris—the regular head who was away on business), and our team enjoyed a spectacular morning (and a win).

So Emmett is in his third year of the local NFL Flag league. He enjoys it. As do I. The games are fast and action-packed. The sport itself is aggressive without being violent. When teams are evenly matched, it can be downright exciting—a merging of athleticism with strategy. Our team, the 49ers, is comprised of nine kids. A few are spectacular jocks. A few are non-jocks. The majority fall somewhere in the middle. As does Emmett. He’s a quarterback with a so-so arm. He’s a receiver with good hands but average speed. It doesn’t matter. It’s just a game.

Wrong. The Redskins are a team of superstars. Not only have they been together for years, they actually play in two simultaneous flag leagues. And we got, well, massacred. The final score was 36-6. It could have been 60-6. We had no answers on defense and my offensive play calling, ahem, didn’t work. Last week, against our relative equals (the Eagles) tricks tricked, sweeps swept, passes soared. Here—nothing. We could have played 100 times, and they would have won 100 times. They scored and scored and scored again. They weren’t mean—but they were ruthlessly efficient and organized. Hell, that’s what happens when you compete in multiple leagues with returnees. It was, college basketball-wise, Kentucky v. Mahopac High School.

As the game went on, and our players started to wilt, I became increasingly frustrated. It wasn’t losing. It was the utter unfairness of it all. What’s the point of having a league where the decks are stacked—heavily—in favor of certain teams? I could see our guys turn increasingly frustrated. And, again, it wasn’t the defeat. It was the slanted table. We could do nothing against them, just as I couldn’t do anything in a fight with Floyd Mayweather.

When the game ended, I actually approached the Redskins coach. I said, “Look, I wanna ask you a question. And I mean no offense, but how is this fair?”

He was shockingly gracious and decent. He told me his sons love flag football, so he devotes himself to coaching them. Yes, he gets five returnees year after year—but (hey) it’s what the leagues allow. He said he never tries to run scores up; even offered to talk play calling with me and offer suggestions. It wasn’t what I expected. He was kind, but also devoted to making the Redskins ridiculously good.

I suppose my problem is with the league (which is otherwise terrific). I can’t understand why you’d have teams retain players year after year. It’s a competitive balance killer, and dispiriting as hell.

PS: During the game our best player left. Just left. He was frustrated and walked off, and his parents allowed him to do so. Not a word uttered.