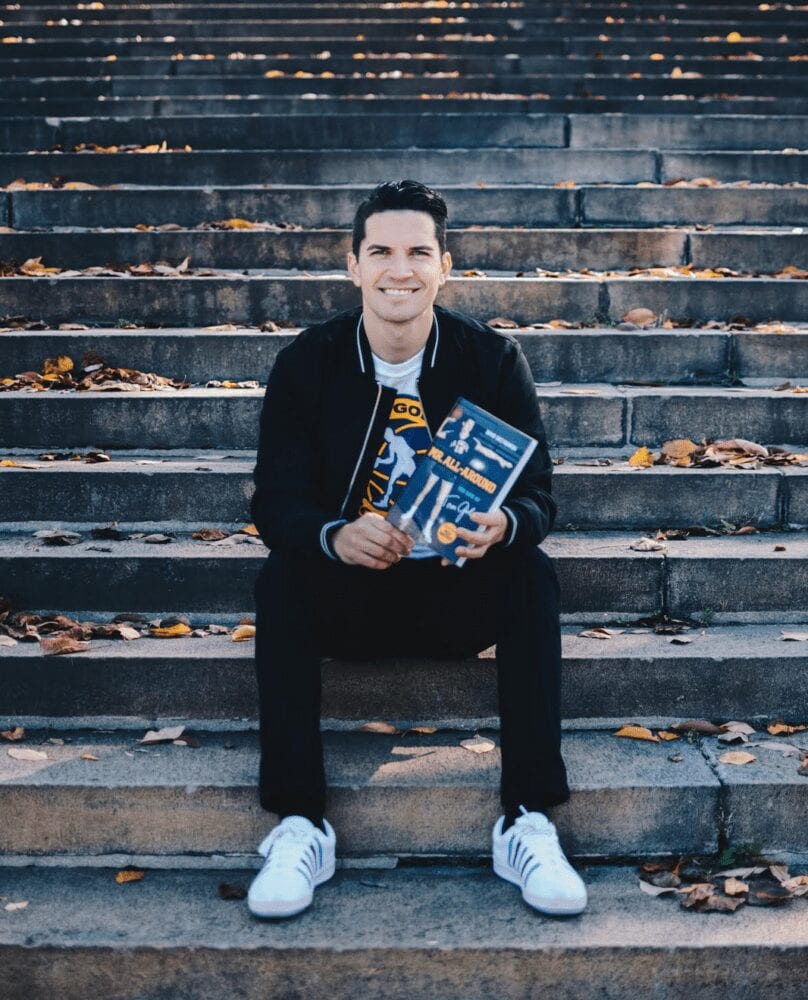 Even though this site draws a large number of sports enthusiasts, there’s a solid 79.3 percent chance you’ve never heard of Tom Gola.

That’s OK. The former La Salle men’s basketball star was drafted into the NBA 63 years ago. And while he was a three-time All-American and five-time All-Star, the black-and-white footage and oft-grainy video clips hardly lend themselves to OOH! and AAH! and WHERE CAN I BUY MY GOLA JERSEY? Plus, Tom Gola died four years ago in relative silence. He was a star whose star had faded. Or, put differently, he was a product of a bygone era of basketball, and oftentimes bygone errors are (sadly) forgotten.

That said, Gola’s life story is riveting and unique, and the subject of Mr. All Around: The Life of Tom Gola, a new book from today’s Quaz, David Grzybowski. And what fascinates me—truly fascinates me—is the idea of undertaking a project of this magnitude, when it’s not an obvious seller. What I mean is, the vast majority of my books have been about large topics with immediate PR energy. Barry Bonds, Roger Clemens, Brett Favre. They’re names, and even if they’re not 2018 names, well, they’re close enough.

And that’s why I love having David here. Because he did this purely out of love and respect for a man whose legacy deserves to be passed forward and kept alive.

So if you’re a fan of strong writing powered by high integrity, today’s Quaz is all you. One can follow David on Twitter here, and visit his website here.

David Grzybowski, you are the Quaz …

JEFF PEARLMAN: Dave, I’m gonna start with a blunt one. You devoted much of your recent life to writing the biography of a man most people have never heard of. I mean, I’m a sports writer and I had to Google “Tom Gola.” So—I ask with respect and admiration—why?

DAVID GRZYBOWSKI: I am a proud La Salle University alum. I covered the La Salle men’s basketball religiously (No pun intended) during my four years in Philadelphia. Before La Salle had their Sweet 16 run in 2013, I interviewed Gola for our student newspaper, The Collegian. I kept in contact with the Gola and his family when I graduated and someone told me “someone should write a book about Tom Gola”. I thought about it and here were are.

I think Gola’s story is so fascinating from multiple angles. He succeed in everything he did in the same city he was born and raised in: Philadelphia. He won the 1952 NIT championship, the 1954 NCAA championship, lost to Bill Russell and the San Francisco Dons in 1955 in the NCAA championship game, won the NBA championship in 1956 with the Philadelphia Warriors, became La Salle men’s basketball head coach in the late 60’s and had a brief stint in Philadelphia politics.  He is the all-time leading rebounder in NCAA history and will forever hold that record. His story needed to be told and I’m ecstatic to be the person to do so.

D.G.: When I was researching this book I never heard of the “1964 Behind The Iron Curtain tour” before. It was kind of the dream team before the dream team if that makes sense. The tour consisted of NBA players from the United States playing against other countries’ top basketball players in Poland, Romania, Egypt, and Yugoslavia. The team was coached by Red Auerbach and had players such as Bill Russell, Tom Heinsohn, K.C. Jones, Bob Cousy, Jerry Lucas, Oscar Robertson, Bob Pettit and Tom Gola.  (Each of these players would be inducted into the Naismith Memorial Basketball Hall of Fame.)

J.P.: I also feel like every book project comes with severe letdown and disappointment. A moment of rejection, of doubt, of despair. What’s yours?

D.G.: I really wanted to interview Bill Russell for this book. He was such a big part of the 1955 season when La Salle faced the San Francisco Don in the NCAA championship game. I tried multiple times to find a way to snag an interview from him, but failed. I also tried to interview K.C. Jones, but had no success as well. One of my favorite interviews was with Bob Knight. He left me a voicemail and I was so nervous to call him back. Nonetheless, it was a great interview and Gola was one of Knight’s heroes growing up. I interviewed close to 125 people for this book.

J.P.: So your background is TV—you worked for WPHL in Philly, WNCN in Raleigh. And there’s a lot about television news I hate. The mad dash for bloody stories, the “We only have a minute left, so tell us …” lead-in to questions, the fake nods, the push for clicks. Tell me why I’m wrong, or right, about the medium.

D.G.: I worked in the TV business for almost five years and I am not the biggest fan of “hard news”. I was always the reporter to pitch feature, exciting and happy stories rather than death/destruction type of stories. The fake nods crack me up, but its so common that you actually do it by accident. I still think TV stations need to invest more into digital rather than worrying about who is watching TV at 5pm or 11pm. I believe stations need digital/social media reporters where they are consistently pushing out content nonstop throughout the day from a news desk on Twitter, Facebook and Instagram. Not just clicks for the website, but actual studio social media production content.

J.P.: You covered Pope Francis’ 2015 visit to America. What did that entail? What was it like? Are you hoping for something you can’t get? Is there a goal with that sort of coverage?

D.G.: Covering the Papal visit in September of 2015 was the highlight of my television career. I think I did close to 25 news stories prior to the arrival of Pope Francis. My goal was to tell unique stories surrounding his arrival to the city. I did a neat story on a company called Bleacher Creatures, a plush doll company in Plymouth Meeting, PA where they sold over 1 million units of their “Pope Francis plush doll”. When he came to Philly my assignment was to cover his arrival at the Cathedral Basilica of Saints Peter and Paul in Center City Philadelphia and a last minute visit to Saint Joseph’s University. I was literally 20 yards from Pope Francis as he was talking to students and blessing a statue. It was a great moment!

J.P.: You interviewed Tom Gola in 2013, a year before he died. What were the circumstances? How was that arranged? And what was the experience like?

D.G.: I found out that the schools University archivist, Brother Joseph Grabenstein, had a relationship with Tom Gola and I asked to met him. Gola was not in the best state of health at the time, but I managed to get a lot of great quotes out of him that day. It was a great experience meeting Gola that day. Crazy how that meeting eventually turned into a book. 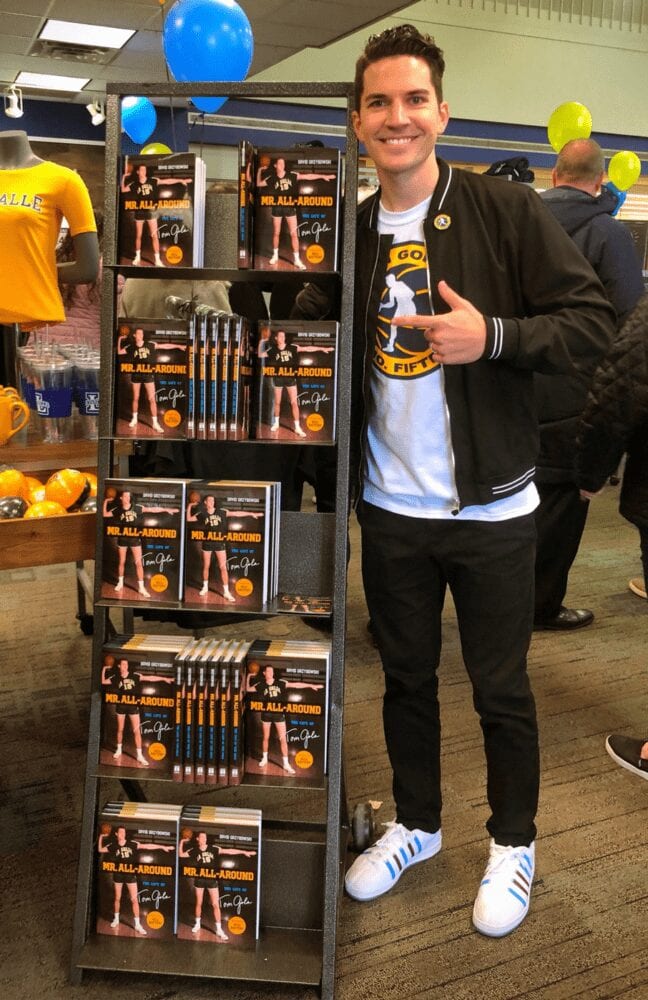 J.P.: Your book is being released by Temple University Press. How did that happen? What I mean is, how did you land the deal? What was the process? And why them?

D.G.: Philadelphia Inquirer sports writer, Mike Sielski suggested me reaching out to Temple University Press for this book. It was a perfect match. A Philadelphia basketball book teaming up with a Philadelphia based publishing company. I actually wrote the book first and then presented the book to Temple Press. It was a great relationship working on the book with them. They were so accommodating working with a first time author.

J.P.: You say you’ve been working on this for five years. That makes my head explode. Like, what does that mean? Five years feels like forever in research world. Five years?

D.G.: If you breakdown the book process it really took about three years or so to finish Mr. All-Around: the Life of Tom Gola. This book was kind of my side hustle for such a long time. I am not a full-time writer, so I didn’t focus on it every day. Writing the book and working in the TV industry was a hard combination, but I got it done. I always admired guys like Seth Davis and Ernie Johnson, who had job 1A and also came out with books on the side. I say five years, because I did start it in November of 2013.

J.P.: So Tom Gola is considered one of the greatest basketball players of all time. He played at La Salle from 1952-55, then had a terrific NBA career. And I ask this is the very literal sense: If we take Tom Gola from 1955, literally transport him to 2018, is he an NBA player? Is he a Division I college player? Who is he?

D.G.: I think Tom Gola would fit into the 2018 NBA game. He was averaging nearly triple doubles every night while playing in the NCAA from 1952 to 1955 and he absolutely is a Division I college player too. I think Gola’s game is similar to a Draymond Green or Ben Simmons type of player. A triple double waiting to happen who can do anything on the court. Bring the ball up, rebound, defense and a decent shooter. 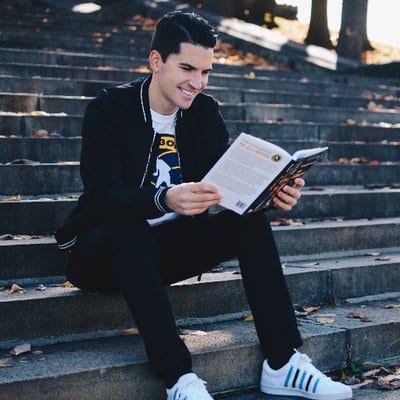 • Three greatest moments of your life: In no order: Meeting/marrying my wife, Jodi. (Met at La Salle University) traveling with the 2013 La Salle Explorers on their Sweet 16 run in the NCAA tournament and writing/finishing this book.

• Four memories from your senior prom: I had a very boring senior prom to be honest. I remember having a last minute date a week before senior prom. I’m confident my dancing skills are top notch though.

• Who wins in a 12-round boxing match between you and Bobby Cox? What’s the result?: HAHA! Bobby Cox is a legend.

• The Democratic nominee for the presidency in 2020 is …: Corey Booker?

• How do you snap out of writer’s block?: Literally don’t write. It’s that simple. I think I went two or three months at one point without writing or researching for the book. Sometimes you have to just put the project on hold for a second to collect your thoughts and regroup.

• Why doesn’t humanity do everything it can to mitigate the impact of climate change?: Climate change is a real problem. I think people will continue to ignore it, until climate change smacks us all in the face one day.

• Best advice you ever received: Put blinders on! Worry about what you can control and out work everything one else. My mentor Steve Highsmith (longtime Philadelphia broadcaster and voice of annual Philadelphia Mummers Parade told me that) Things start to click in your life/career when you focus on what is in front of you.

• This is my all-time favorite song. Thoughts?: HAHA! Nice! Everyone has a different taste, right? My jam right now is anything Lauren Daigle! I came across her when I was living in Raleigh, NC. Check it out.