Olivia Jade is having a bad day. And I’m comfortable with that.

I hate to do this to a kid.

Kids are kids. They struggle. They make terrible mistakes. Once, when I was a student at the University of Delaware, I created an April Fool’s issue for the student newspaper and superimposed our quarterback’s head atop a shortstatured person’s body. That was v-e-r-y bad judgment, committed because—again—I was a kid, and I was young, and I was dumb.

So, again, I hate to do this to a kid, because I remember what it was to be one.

In case you’ve been asleep, I’m referring to Olivia Giannulli, daughter of Mossimo Giannulli and the actress Lori Loughlin. And, according to ABC News, the two parents agreed to “pay bribes totaling $500,000 in exchange for having their two daughters designated as recruits to the USC crew team—despite the fact that they did not participate in crew—thereby facilitating their admission to USC.”

This, from Jezebl’s Ashley Reese:

Now, there are a million places to go with this. So I’ll start here: Fuck this kid and fuck this family. Seriously, I feel like punching a fucking wall. You people are wealthy. You’re loaded. You’re in the one percent’s one percent. Hell, your damn kid told her followers in a video last year: “I don’t know how much of school I’m gonna attend. But I’m gonna go in and talk to my deans and everyone, and hope that I can try and balance it all. But I do want the experience of like game days, partying … I don’t really care about school, as you guys all know.”

I should probably note that young Olivia is a social media “influencer”—a term that translates to, “No redeeming talents, but pretty/perky/popular enough to get free shit from companies, then have lemming followers go out and purchase said free shit, thereby assuring you increased volumes of free shit.” She has more than one million Instagram followers and more than two million YouTube followers, and regularly posts nonsense like this …

I would actually like to take a moment to note:

A. No college student should be allowed to have a dorm room that looks like that.

B. Turns out Olivia wasn’t actually a college student, per se, so ignore Point A.

D. Those are my roommates—Scott (left) and Paul. If you look on the table, you’ll see a bagel that sat there (quite literally) for seven or eight weeks. The Gatorade jug was filled with sand and served as a weight. The carpet smelled of vomit and butt. The couch smelled only of butt. It’s what college is supposed to look like.

E. But, again, Olivia isn’t a college student. Mommy and Daddy bought her way in.

The wife and I spoke at length about this today, and she wrote this on-point post. I would like to tell you I’m horrified, because I am. I would also like to tell you I’m shocked—but I’m not. There’s a reality in the United States, and it’s this: Being white and having money gets you all sorts of shit, and being white and having money and being famous gets you even more shit. It’s a fact, and the reason why I laugh—audibly, but not happily—when I hear whites complaining about the unfairness of Affirmative Action.

Lastly, I don’t actually get it. You’re Mossimo Giannulli and Lori Loughlin. You’ve raised your kid to be this (apparently) wealthy, spoiled, famous millennial poster child (not in a good way, to be clear). Don’t you want to give her some understanding of accountability? Even just a little? Fuck, before Lori Loughlin was an actress on Full House, she was a kid in Hauppauge, Long Island. Her father was a foreman for the New York Telephone Company. She attended public high school. Doesn’t any of that exist? Even a morsel?

Furthermore, what would be soooooooo awful if Olivia, say, spends a year at Saddleback Community College to see if she even wants to attend school? Would that bring so much shame to your B-list family? Is that simply unbearable?

Because right now, somewhere in America, there’s a hard-working kid whose dream of attending Southern Cal was steamrolled.

Because some rich assholes forked over half a mill.

PS: Apparently Olivia turned off the comments section on her social media feeds. This seems wise. But someone still slipped this in. Perfectly stated … 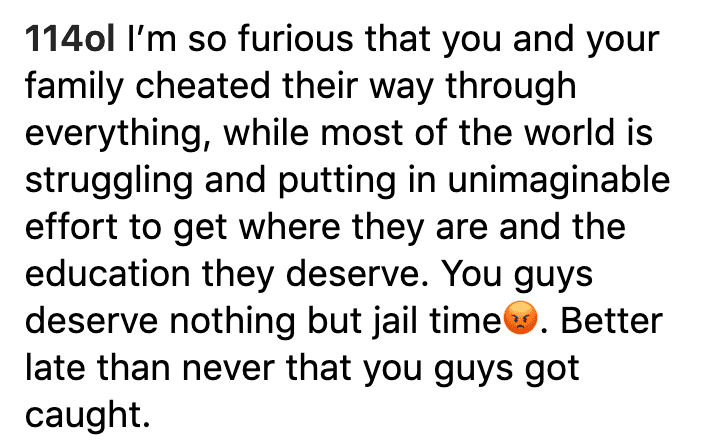