My wife donated one of her kidneys to a stranger this morning. 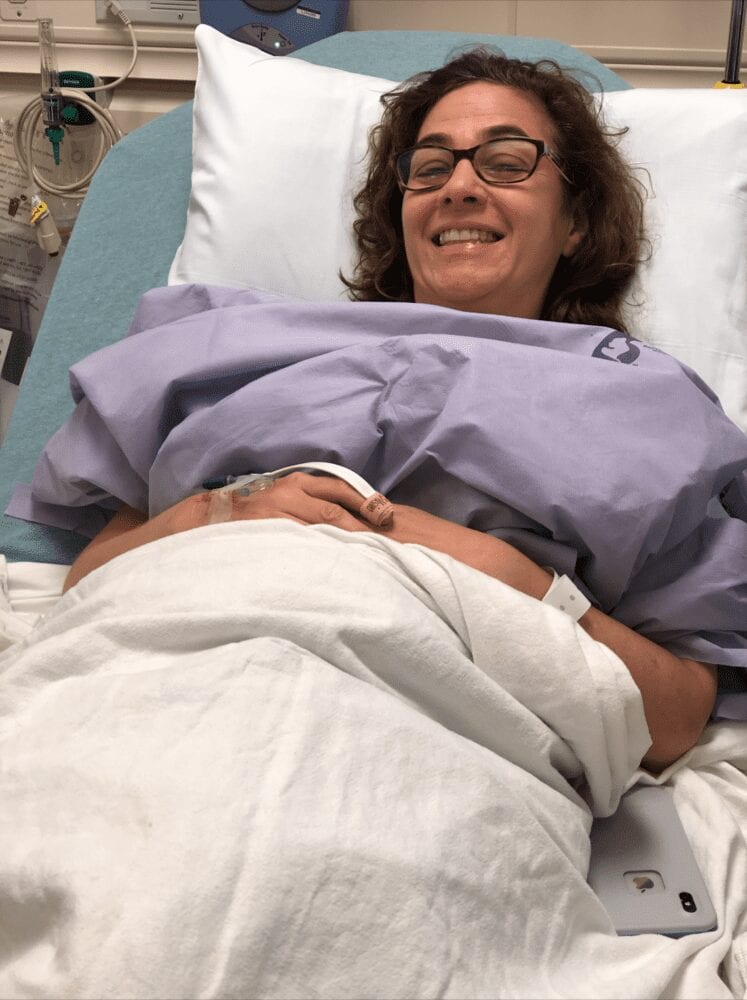 It’s 10:15 am, and as I write this my wife Catherine is in surgery here at UCLA’s Ronald Reagan Medical Center—donating one of her kidneys to a complete stranger.

You read that correctly, but I recommend reading it again. My wife Catherine is in surgery donating one of her kidneys to a complete stranger.

The story dates back several months, when Catherine was sitting in a Starbucks. She was doing our friend Bev a favor, and had a moment to spare, so it wasn’t a coffee shop she often frequents. While waiting, or standing, or thinking, or something—she spotted a flyer hanging near the front of the store, above the sugar and powders and milk canisters. It was posted by a woman, Monica Valdez, whose husband was in need of a kidney. The man’s name was Eli, he was in his mid-40s, he had type O+ blood.

That night, she asked if I thought it’d be crazy to donate a kidney.

Like most Americans, I was naive to kidneys in about 10,000 different ways. I didn’t know how they function, what they do (in any sort of detail), how donations kick off. I certainly didn’t know that, across the country, hundreds of thousands of people are in need of kidneys, and that we can live fruitfully with just one, and that the process of having a kidney removed is remarkably safe. So we talked about it, and I said, “It seems like it’d be an amazing thing to do.”

Catherine followed with something she’s wondered—openly—over and over and over. “Does it come off as dumb to give a kidney to someone you don’t know?”

I get the question. I’ve always gotten the question. You’re a parent with two children. You’re a daughter. You’re a sister. Is this wise? Is this prudent? Is it putting yourself at risk? Also, to a lesser degree, what will others think? Does it seem foolish? Reckless? We’re only humans, after all, and these are the ponderings that enter a mind. Am I being kind, or insane?

Catherine decided to go for it. Or at least put herself out there. She underwent the various tests at UCLA, and was deemed a match. In many ways, it always felt more hypothetical than realistic. She might give a kidney. This could happen. It may go down. Probably not—but maybe.

Then the call came.

Upon arriving at the hospital 6 o’clock this morning, we were ushered into a registration area. There were a couple of people sitting quietly in the corner of the room, and as we walked past Catherine whispered to me, “I think that’s Eli and his wife.” We sat down to register, and she said, “Should I say something to them?”

Moments later, Catherine approached. They stood, and suddenly this emotional cape cloaked us. There were no hugs, and no tears, but the wife and I both felt like crying. This man—sick for so long—would be receiving a kidney that should change his life. A kidney from my wife. We know almost nothing about him. Name—Eli. Job? Don’t know. Hobbies? Don’t know. Trump supporter? Obama lover? Apolitical? Don’t know. Jets fan? Amateur magician? Pearl Jam diehard? Don’t know. We know, legitimately, one thing—he needed help.

My wife decided to deliver it.

I wrote all of the above six hours ago. It’s now 4:02 pm. About 50 minutes back I received word that everything went fine. Catherine is tired, but well. The kidney was removed sans fuss. No problems, no complaints.

As I was waiting for word, I struck up a conversation with Monica, Eli’s wife. We’d never met before today, but there was an instant connection. Similar, perhaps, to a pair of soldiers who experience battle side by side. The two of us were in different parts of the waiting area. When Monica walked toward my turf I said, “How are you doing?”

Eli and Monica met nearly 28 years ago, when both were in high school. They’ve been married 17 years—same as us. Monica works in the medical field, Eli at a bank. He’s needed a kidney transplant for slightly less than a year. No family members matched. Dialysis has been nightmarish. Once, while receiving treatment, another patient died in front of him. Here, gone. Eli had to take a leave from his job, because he suffers from uncontrollable coughing fits.  Months ago they believed they had a match. Someone Monica knew from her youth said she was moved by Eli’s plight, and wanted to offer her kidney. They were both O+; everything lined up. The woman began preparing, following procedures—then dropped off the face of the earth. Ghost. Monica says the woman still LIKES some of her Facebook posts, but never gave a reason for vanishing. It was a crushing blow.

Then Catherine entered the Starbucks.

Monica told me she felt something about Catherine was different. And she’s right—she is different. Granted, this is something everyone says about his/her spouse. Cliches aplenty—“big heart,” “would give the shirt off her back,” “the most compassionate person.” On and on. Truly, though, this is next level shit. I think I first saw it when we were early in the dating process, and Catherine was running a youth homeless shelter in New York City. She was this young, green 5-foot-nothing woman—and the kids responded to her. She cared, and they could see it. Feel it. Come Christmas the shelter used to buy a gift for every resident, and I have this vivid recollections of Catherine handing a kid named John a thing of tube socks. John was giddy—the socks were more than mere socks. To someone, John mattered. Catherine beamed.

If you’ve been around enough, you can sniff out fake compassion v. legitimate compassion. Catherine’s has always been legitimate. She wants to end suffering. She wants you to be happy. She doesn’t see family members as any more worthy of love and empathy than strangers. There’s no ego. No boastfulness. You help people because you help people. No preening allowed. You help to help.

Anyhow, Monica and I spoke at length, and at one point Eli’s parents—also in the waiting room—approached. His father only speaks broken English, but he extended his right arm in my direction and said, haltingly, “I need to shake your hand.” Eli’s twin brother started talking to me and had to walk away. It was just too much. “He and Eli are best friends,” Monica explained. Monica told me her father, 85 and not here today, cried when he learned Catherine was donating her kidney.

Around this time, the doctor who inserted the kidney entered the room. He asked for Monica, who excused herself and left for the hallway. I watched from 100 or so feet away as she listened, listened, then raised her arms into the air. She wrapped her arms around the doctor, returned, said, “He told me the kidney is doing exactly what it’s supposed to!” She asked if she could hug me. Of course—it was as satisfying a hug as I’ve known. I then watched her and a gaggle of family members embrace.

If not the greatest moment of my life, easily top fi—

It’s now 4:41 pm. I am sitting by Catherine’s bedside. She is groggy and sort of out of it. The pain is fierce. Normal, but fierce.

A nurse, positioned two stations away, motions for me. “Is that your wife?” she says.

“Is it true she didn’t know the person receiving her kidney?” she asks.

“Yes,” I say—then tell her of Starbucks, of the flyer, of her past at a homeless shelter, of the best person I know.

PS: I feel quite certain that, in the future, I’ll be donating a kidney. And if there’s one thing I’ve learned through this process, it’s that we all should (if possible) consider doing so. It’s not dangerous, you live a prosperous life with one and you are saving another person’s life. Even if it’s a stranger. What difference does that make?