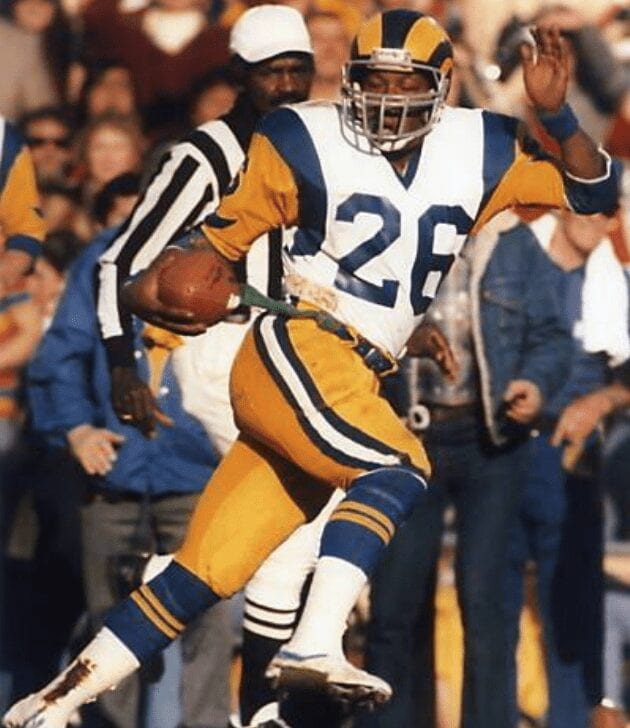 Today is Wendell Tyler’s 64th birthday. And if you don’t know who Wendell Tyler is, you’re either A. Young; B. Not much of a sports fan; C. Unaware of 1980s halfbacks.

For me, Wendell Tyler always symbolized something mythical. He was the Los Angeles Rams’ starting running back for a good chunk of my favorite decade, and the images of him taking the handoff from Vince Ferragamo, cutting left, dashing through the hole, gliding past safeties into the end zone—well, those moments made me fall in love with football; with sports; with Wendell Tyler.

To Young Jeffie, Wendell Tyler was cool. California cool. I imagined him on his off days, kicking back by a pool, drinking some sort of umbrella-adorned beverage, sunglasses on, ladies aplenty. I imagined him singing autographs with one quick swoop of a Sharpie. I imagined him making guest appearances on Chips. The football star who helps Ponch and John solve some crooked ticket scheme.

Today, however, as I was learning of Tyler’s birthday, a quirky thought entered my head. To be blunt, Wendell Tyler’s first name is … Wendell.

Wendell, like a prize-winning mule or pig or chicken.

It’s that genre of name; stereotyped to cause us to think of something rural and southern and slow. Which is amazing, because Wendell (Tyler) is urban and Western and sleek.

It all speaks to the power of sports and names and association. For example, my dad’s name is Stanley. Stan. Which strikes me for what my father is—a wonderful man, but unathletic. A Jewish guy from Brooklyn who likes naps and sandwiches. Then, however, I began covering Major League Baseball, and the Cincinnati Reds featured a dynamic pitcher named Stan Belinda. He threw hard, he never backed down. Rugged kid. And I never thought—for even a second—”Hmm, his name is Stan.” Because being an athlete shed any of the stereotypes of a traditionally geeky anointment.