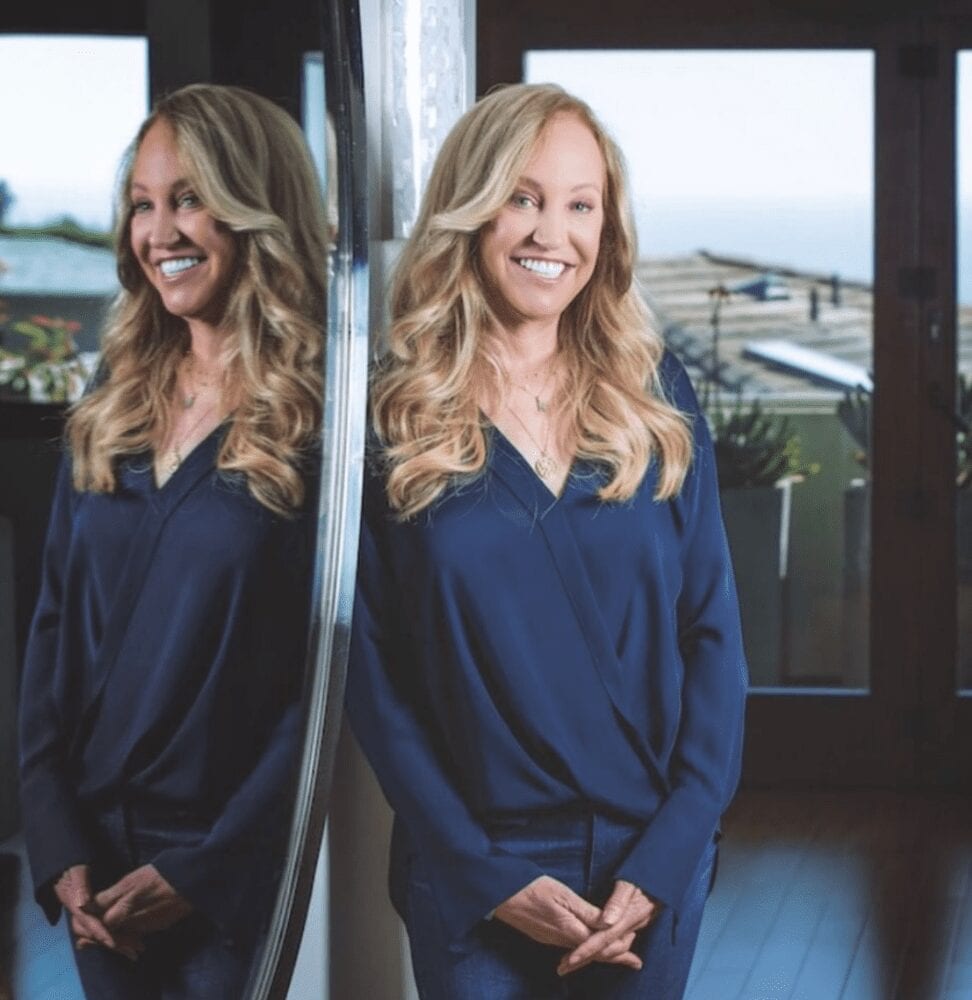 Kaira Rouda is a smiler.

It’s one of her lovely traits. Whenever one runs into the Southern California-based author, she seems to be smiling. At book signings. At events for her husband, Rep. Harley Rouda. At the grocery store. At the donut shop. Good times and bad, Kaira just oozes a certain optimism that makes a person think, “Maybe, just maybe, we’ll be OK.”

Which is funny, because her books are, ahem, seriously warped. Kaira’s latest release, “The Favorite Daughter,” is a psychological thriller that delves into … well, let this Kirkus review explain … 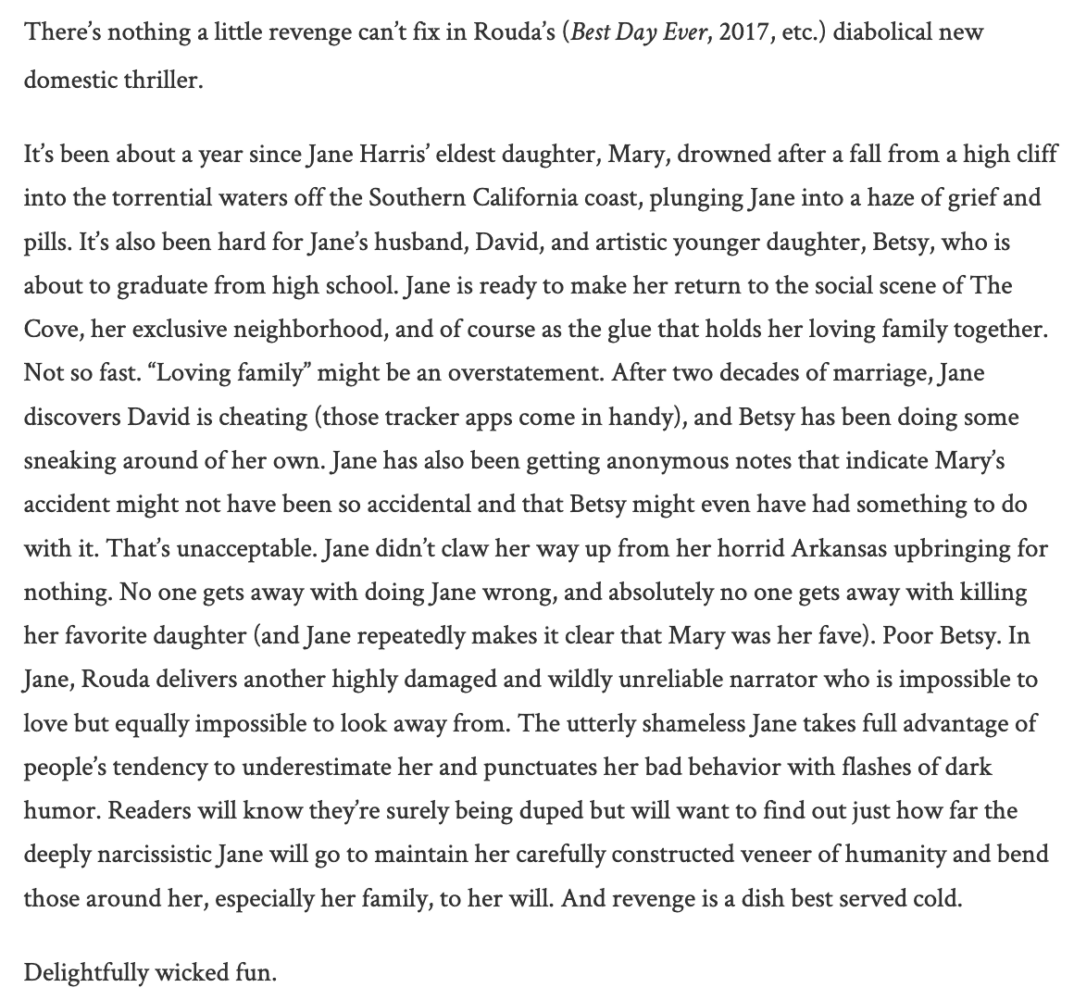 Kaira Rouda, you are The Quaz …

JEFF PEARLMAN.: So Kaira, I attended your book event yesterday—small shop, about 15 of us, cookies. And I wonder, as a fellow author: How do you feel about these types of events? They scare the shit out of me, but you seemed relaxed, happy. Am I doing this wrong?

KAIRA ROUDA: I started doing book events when my nonfiction book, “Real You Incorporated: 8 Essentials for Women Entrepreneurs” came out back in 2009. So, it’s been 10 years of this. Back then, I was stunned. I figured I’d written all I had to say in the book, so that would be enough. I learned quickly that books sell when the author is actively pushing them. There is no place to be passive: but the fact is, most of us writers are shy at heart. I hired a speech coach back then, and I’ve tried to take those lessons with me ever since. It’s easier now, but still takes something out of me for sure. And it doesn’t matter whether it’s a fabulous indie bookstore with 15 book lovers or a big swanky event at a private home—when I get to talk about my book, about writing, about doing what I love to do, it’s a great evening. We should be scared as shit—and feel blessed. My take at least!

J.P.: When you were discussing your new book, “The Favorite Daughter,” you spoke of the characters almost as if they’re real people. And I’m curious—do they sort of become real to you? Not in the cliché fiction way. Do you, at times, think of them as actual people? Does it become that deep?

K.R.: You know, they do become almost real, at least during the initial writing stage. They are very much alive, in my head. Does that sound strange? I’ll be at a party, or on a hike, and Jane would start speaking to me, anxious for me to get back to her story. OK, yes, that does sound odd. But it’s true. By the time you’re holding my finished book in your hands, in this case “The Favorite Daughter,”  I’m likely living with some new characters in a draft. That said the best part of talking about the characters in my current novel—Jane, David, Betsy and the rest—is that I always discover a new perspective on them. It’s like readers see my characters from another angle, and that’s great fun.

J.P.: I’m in the middle of writing a book as we speak, and I’m fucking tortured. Beaten, battered, exhausted, filled with doubt. I’ve never written fiction, so I’m curious if that happens to you, too. And, if so, how do you work through?

K.R.: Congratulations! I think we all face that phase … especially in the middle of the book. You just keep going. Oh, and here’s another thing: If it’s not happening for you on that day, just stop. I’m not in the camp of forcing yourself to write when it’s not happening. I think our muses deserve loving kindness, not abuse. So be kind to yourself. There is so much that’s great about writing a novel, jumping into a world you’ve created. It will all be worth it when you type The End. Promise.

J.P.: Your husband Harley is a U.S. Congressman in his first term. And all we hear about Washington right now is awful-awful-awful, no one gets-along, angry, angry, etc. You’re a newbie to this. What have you found?

K.R.: I’ve been blessed to meet a really great, bipartisan group of spouses, men and women, who support each other as we support our congressional members. The thing is, the news doesn’t cover the bills that pass with bipartisan support, the wonderful work that is done every day. It’s not newsworthy in this environment we’ve created. But it is so much better than you think. Promise. And I cannot believe how hard these people work. I’ve been a business owner, an entrepreneur, raised four kids. This pace, the DC pace, is grueling. On a positive note: my new friends in DC hosted a book launch party for “The Favorite Daughter,” and we sold out of books! The Washington Post covered it. Very surreal. But also, points to the positive culture you can find in DC!

J.P.: Along those lines—has being a political spouse changed you? The way people approach you? What I mean is, yesterday Harley was at your event for eight seconds before a woman asked his presidential preference. Are people asking you those questions now? And does it annoy you? Are you OK with it?

K.R.: I do get a lot of questions that begin with: “What does Harley think of _______?” I tell people to ask Harley. I don’t want to speak for him, much like he doesn’t want to answer questions about my spooky domestic suspense novels. Politics is his world, prose is mine. We do try to be there for each other, as much as possible. It’s been a busy few weeks with both my book tour and his crazy schedule. But we’re trying to make it work. As for the questions, do they annoy me? No, not at all. It comes with the territory. I take it as a sign that people care. We all need to care more right now.

J.P.: You described yourself as a reformed romance novelist who “couldn’t write sex scenes.” I’m fascinated by that. Was it hard to make them authentic? Was it just embarrassing? Did you picture your kids reading it? Why so hard?

K.R.: I started out my fiction writing career in women’s fiction, and that’s still where I am today. My first novels, “Here,” “Home,” “Hope,” “In The Mirror,” “All the Difference” and “The Goodbye Year” all deal with what’s happening beneath the surface of seemingly perfect lives. Suburban setting, some dark topics uncovered.

I did have a two-year stint writing romance because one of my women’s fiction author friends and fellow Southern Californian, Jane Porter, launched her own publishing house and asked me to write for her. I had a blast learning romance formulas (I’d never written to a formula before and didn’t even know tropes were a thing) but what I didn’t enjoy was the sex part. Romance has tons of different “heat” levels, too, so it’s not as if you must have sex. I loved getting to know everyone in that fiction arena, and loved working with Jane and her new publishing company, but as you may notice, I like writing a bit darker, a bit creepy. And that’s not romance. That’s domestic suspense. I’m feeling right at home in the crime writing community.

J.P.: What’s your book-writing process? “The Favorite Daughter,” for example. Idea comes in your head—then what? How much research is involved? When are you writing? Where?

K.R.: I’m what’s called a pantser. An idea pops into my head, usually a character and a title, and I start writing. If there is research involved it comes as I need it. Like, for example, in “The Favorite Daughter,” Jane’s obsession with tragic death took some searching. My browser history can be a bit terrifying.

J.P.: You said suburbia is your preferred setting. Why? A lot of people view suburbia as America’s central spot for boredom. What do you see others don’t?

K.R.: There’s so much happening in the suburbs, and it’s just beneath the surface. I am a product of the suburbs and I love setting my stories here.

K.R.: Walking into the Javits Center in New York for BEA and seeing a three-story tall banner of my book, “Best Day Ever.” It was a dream come true. Worst: almost 20 years ago now when my agent had found the perfect home for my novel, “In the Mirror.” The acquiring editor, a very famous woman in the publishing space, died suddenly in the back seat of a cab, with my unsigned contract in her briefcase. It was a far worse day for her of course, but the manuscript became tainted and we never sold it.

J.P.: This is sorta wide-ranging, but lately I’ve been more gloomy and dispirited than ever. Trump. Climate change. Books not selling (as an industry) as much. On and on. And you seem genuinely … I dunno — chipper and optimistic. What am I doing wrong?

K.R.: You gotta look for the positive in life, my friend. They far outweigh the negative. We’re blessed to be here!

• How did you meet your husband?: At an event I was covering as a cub reporter in Columbus, Ohio. His law firm was the sponsor.

• One question you would ask Cameron Diaz were she here right now?: Would you like to play Jane Harris in a TV series?

• Three words you overuse in writing?: I don’t know. I try really hard not to use really. But there it is. Twice. Really annoying.

• Tell us a joke: Nope. I’m terrible at them. Although, I do have a somewhat terrifying dark humor it turns out.

• What’s the worst smell in the world?: Fresh cut grass. I’m so allergic.

• Ever thought you were about to die in a plane crash? If so, what do you recall?: I was in an armed robbery once. Time slowed to a crawl. It was crazy. As for a plane crash, a couple times, but I was with my kids so I focused on faking it.

• I don’t love the Miami Marlins new uniforms. Your thoughts?: I have no clue. I’m not really a big sports person, although I do like college football.

• The spelling of your first and last names is pretty much begging people for manglings of pronunciation and spelling. What are the most common? Worst?: Cairo. Keeera KeeAIRah. I’ve heard just about everything. As for Rouda: Rowda, Rhoda, you name it. When I add in my maiden name, Sturdivant, game over. Kaira—like air in the middle. Rouda—like Gouda. That’s all I’ve got for you!

PrevPreviousCan this man be a bigger fucking buffoon?
NextWhat I learned from a week off of TwitterNext