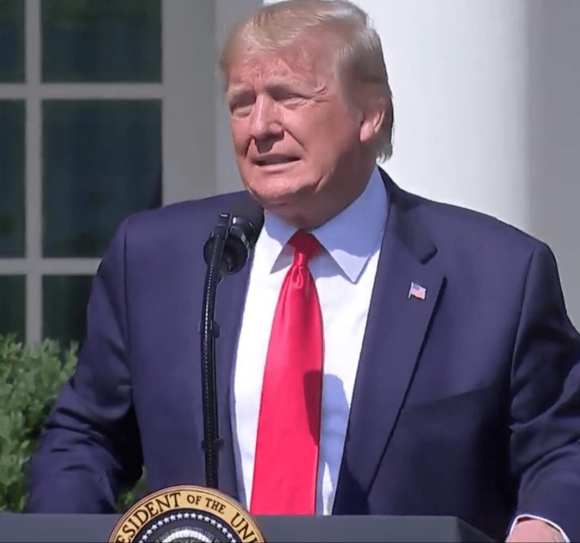 Woke up this morning after a crappy night of sleep. Checked e-mail. Then Twitter.

It was a video of Donald Trump from earlier today, signing a bill that permanently guarantees health care funding for victims and first responders from the September 11 attacks. Here’s the snippet that was sent to me …

So that’s the president of the United States, insisting that he was “down there with you” in the aftermath of the greatest domestic attack in modern United States history. At other moments, the president has claimed he was helping with the digging through the rubble. He has said he sent hundreds of “my men” to Ground Zero to assist with the recovery (not one has ever stepped forward, and no officials with the recovery effort can recall this). He also has claimed that, as the towers fell, he saw (with his own eyes on television!) thousands of Muslims celebrating atop buildings in Jersey City. He also also claimed that he watched people jumping from the towers—even though he was four miles away at the time. He also took $150,000 in funding allocated to help small businesses impacted by the tragedy. He said he lost hundreds of friends on 9.11—but attended nary one 9.11-related funeral. Oh, and as 9.11 was unfolding he went on TV and boasted of now having Manhattan’s tallest building.

I have a friend. Great guy. And he asked me this morning, “Why would Trump lie about this? It makes no sense.”

And my reply is, “You’re right. It makes no sense.” How warped does one have to be to fabricate his involvement in our darkest day. But there’s a little-known-yet true story about Donald Trump that explains this well.

In 1989, three Trump executives—Mark Etess, Jonathan Benanav, and Stephen Hyde—died in a helicopter crash. For years, Trump has insisted he was supposed to be in the aircraft with his colleagues; that it was “50/50” whether he would fly that day. And yet, three different Trump biographies report that he was never scheduled to be on the chopper. This, from Harry Hurt’s Trump biography, Lost Tycoon: “After being asked by a reporter, hours after the accident, to comment, via telephone, on the fatal crash that killed Stephen Hyde and several others, Trump muted the line and then said to the several high-level Trump staffers assembled before him, “You’re going to hate me for this, but I just can’t resist. I can get some publicity out of this.”

Hurt’s book cites a half dozen close-to-Trump sources who insisted the scheduled-to-fly line was a pure lie to gain points.

It’s what he does.