Sometimes certain people in this world catch your attention. And later, when someone asks, “What the fuck—are you obsessed?” the honest answer is a sound, “Yes. Yes, I am.”

So I’ll say it. This week, I am obsessed with a man named John Cardillo.

I wish I were obsessed in a good way. I wish I could look at him and think, “Boy, that’s a virtuous guy” or even, “Wow, what a handsome rascal.” I wish my obsession involved intellect, savvy, smarts, kindness. I wish I was looking at John Cardillo and listing all the things I could do to make sure my daughter and son wind up just … like … him.

Alas, my obsession is something different. It’s an obsession over the looming question: How the fuck does someone become … this?

In case you’ve never heard of John Cardillo, he’s a TV guy for Newsmax, a conservative outlet that can be watched in myriad forms. And while Newsmax isn’t my taste (I swore off all cable news about two years ago—one of the great decisions of my lifetime), I harbor no beef with people (left or right) making a living in media. If John Cardillo wants to spout off conservative ideals, hey, more power to him. Plus, he’s actually a pretty charismatic on-screen presence. I understand why people watch (lord knows it’s more interesting than The View).

But here’s what gets me. And gets me. And gets me. John Cardillo is not only a New Yorker—he’s a former member of the NYPD. A police officer. A cop. And even with all the controversies involving law enforcement in America: 2019, I genuinely admire and respect police officers. It’s a beast of a job, you put your life on the line, you exist to protect and defend. If nothing else, it’s about 10 million times more noble and decent than writing sports books. So, again, nothing but props for the NYPD.

But if you’re from New York, and you served in law enforcement in my city, you don’t merely know the horror of Sept. 11. You feel it. You own it. The tragedy was our tragedy. The people lost were our people. Two thousand, nine hundred and seventy seven innocents perished that day. Twenty three New York City police officers died, and a whopping 241 have lost their lives since from 9.11-caused illnesses. I’ve written at length about my 9.11 experience, and the tragedy/horror/awfulness doesn’t compare—even come close to compare—to what others went through. It’s the worst of the worst of the worst.

So, please, someone explain John Cardillo.

In considering this blog post, I did a quick Newspapers.com search, and found an interesting July 30, 2016 column from Michelle Malkin that featured a heavy dose of John Cardillo … 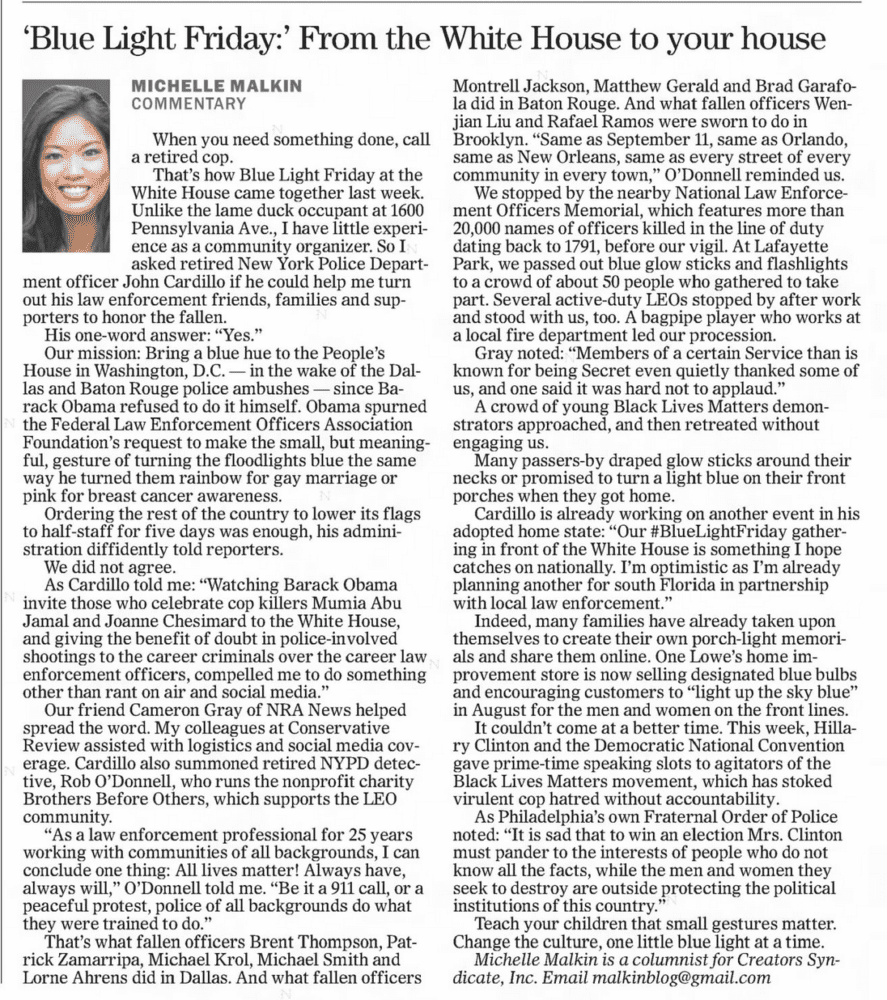 While I’m no fan of Malkin, and I could certainly do without the extraneous swipes at Barack Obama, you read this and admire the basic concept. “Blue Light Friday”—the idea of honoring fallen officers. The idea of remembering police who died in the line of duty. It’s a sound concept, and I support it, and it seems that John Cardillo wants to do right. I mean, the quotes are angry and the messaging clunky. But he wants to.

So here’s what I don’t get: Donald Trump is president, and John Cardillo loves him. L-o-v-e-s him. Parrots him. Speaks like him. Tweets like him. All but kneels before him in a President McClure-before-Zod sorta way. And while (I suppose) from a policy standpoint that’s fine, it’s … it’s … SO FUCKING HYPOCRITICAL I WANT TO PULL MY (LITTLE-TO-NO) HAIR OUT.

John Cardillo hated how Barack Obama dishonored police officers. Fine. I disagree, but I hear the take. Yet here we have, in Donald Trump, a man who has repeatedly (and by “repeatedly,” I mean r-e-p-e-a-t-e-d-l-y) lied about 9.11 and his actions on that day.

This is not debatable. This is not left v. right. This is not open to interpretation. This is fact. On a day when nearly 3,000 New Yorkers died, Donald Trump has created a story (stories, really) of what he did.

In a speech not all that long ago, Donald Trump told a crowd that, in the days after the 9.11 terrorist attacks, he was at Ground Zero, helping search for survivors. Really, here’s the link. To quote Trump: “Everyone who helped clear the rubble—and I was there, and I watched, and I helped a little bit. But I wanna tell you—those people were amazing. Clearing the rubbing, trying to find additional lives. You didn’t know what was gonna come down on all of us.”

This is, factually, untrue. Save for conducting an interview near the site, Trump wasn’t at Ground Zero in the days after 9.11. He certainly wasn’t helping dig through the rubble. In another clip, right after the nightmare, Trump said he had hundreds of people helping with the relief effort—also untrue. Like, a lie. He also said this to an NBC reporter … 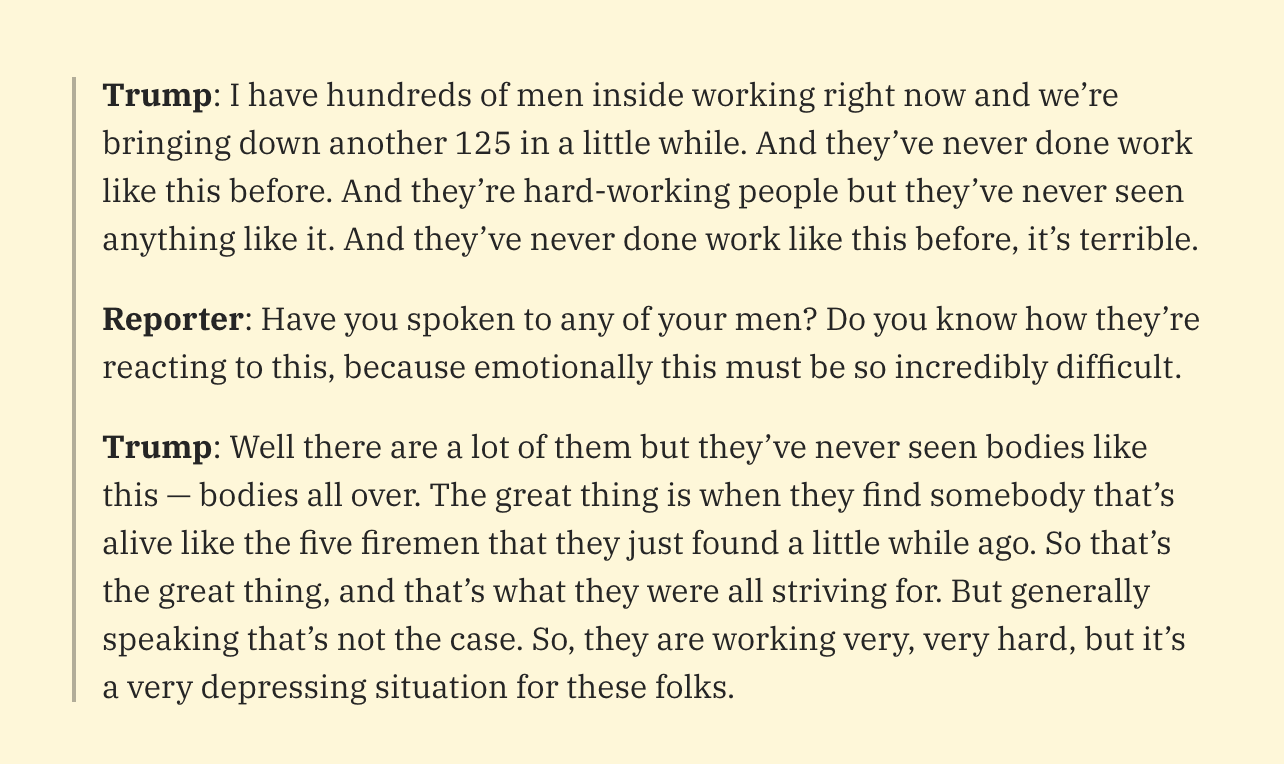 Again—not true. In typical Trump speak, it was all very vague and lacking in specifics. Years later Richard Alles, a retired deputy chief with the New York City Fire Department (FDNY), confirmed that Trump had no one helping out; that it was utter nonsense.

On Sept. 11, Donald Trump went on TV and bragged of now having Manhattan’s tallest building. Here’s the link—it’s unambiguous. Shortly thereafter, he went on Howard Stern’s show and pledged a $10,000 donation to the Twin Towers Find. He gave $0.00 (The lemmings will counter—”What! He donated $100,000, you libtard!” Which is sorta kinda true/not really true—immediately before the New York State primary in 2016, Trump made a $100,000 donation from his foundation to the 9.11 Museum. He has never given his own money.)

But here’s what’s funny: I don’t care if people of John Cardillo’s ilk like Donald Trump. It’s a free country, and if you want to scream #FAKENEWS! alongside a man who created fake Time Magazine covers in his country clubs, who invented a publicist by disguising his voice … hey, go for it. If you want to stand alongside a man who lied about a military pay raise to the faces of soldiers and asked that disabled vets be removed from the stretch of street in front of Trump Tower … hey, go for it. If you think it’s awesome that the same guy whose businesses employed undocumented immigrants (until very recently) hammers the usage of undocumented immigrants … mazel. A fake university that bilked people of their money? Shit happens. Lying under oath at the USFL trial? Meh. Fucking a porn star 10 days after the birth of a child? Whoop-dee-doo-damn. Inventing a telephone call from the Boy Scouts of America? Child’s play.

If Donald Trump represents your viewpoints, if you like his mojo—own it. Be it. Stand by it.

But if you’re also going to stand up for police officers and firefighters; if you’re going to wave the flag and ooze patriotism and speak for the glory and honor of the United States of America, I’d argue that defending a man who (on the subject of our greatest tragedy, a day when your brothers died) has repeatedly, unabashedly created stories to up his Q rating isn’t merely pathetic.