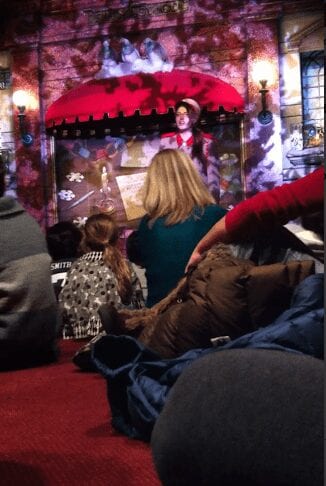 Back in the winter of 1989, I spent the winter months working as a cashier at the local CVS. It was pretty awful, in that the December lines were ceaseless and complaints were fired off like rounds from a handgun. And yet, there was certainly a bright side—whenever a bag of holiday-colored M&Ms ripped open, we (the employees) were allowed to eat them.

Hey, it was something.

Point is, blue-collar holiday gigs almost always suck. They pay peanuts, they involve huge chunks of crowd control and you’re required to be happy happy happy all the time, even when you’re miserably exhausted and just wanna go home. I’ve seen many such jobs over the course of my life, ranging from the women who offer perfume samples at Bloomingdales to the dudes dressed as elves at the Hershey Store.

Over the past week, however, I’ve seen what must be considered the absolute worst of the worst; the singular job that (I believe) can only result in excessive drooling and years upon years of rehabilitative therapy.

Namely, the woman who works as the hostess at the Macy’s Christmas Puppet Show.

That’s her above, and she’s sweet and wonderful and lovely and happy and engaging and … and … and … my heart hurts for her. Last Sunday, I took my 7-year-old son to Macy’s for our annual winter fun day. We paid our $10 ($5 per person) and entered the puppet show. The above woman stood in front of, oh, 12 kids and said, in her scratchy little voice, “Does anyone here know any Christmas carols?” Some tyke said, “Rudolph!” and the woman then—under obvious orders—led the room in a painful-yet-dogged rendition of the wish-it’d-never-been-written classic. She sang two or three more songs, then said, “Now, let’s start the puppet show …”

With those words, the woman didn’t exit, or sit down, or pick up her cell phone. Nope, she watched the entire 25-minute production. As she had done an hour before. And as she would do an hour later. And two hours later. And three hours later. And four hours later. As my son and I left, I thanked her and said, “You’ve probably seen this one more than a few times.”

She giggled awkwardly and said, “Oh, yeah”—which I interpreted to mean either: A. I’m actually legally deaf, so it ain’t no big thing; or, Jesus Christ, please kill me.

Anyhow, today I took my daughter to Manhattan, and she too wanted to see the puppet show. So back we went, to Macy’s eighth floor. And, once again, there was my friend, courageously leading a larger crowd of children through the same songs, then presenting the same show, then standing to the side, surely counting the days until Christmas Madness comes to an end and she can return to a life of peace and happiness.