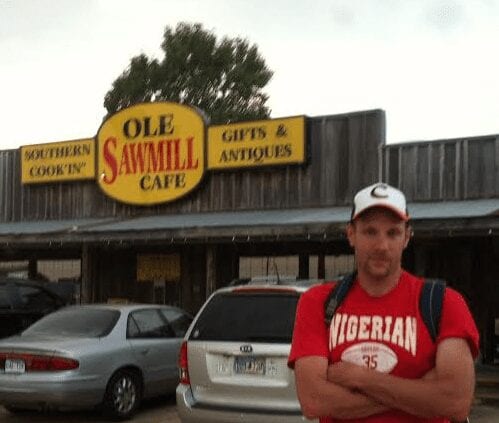 There’s a myth out there, sent forth by millions upon millions of people who are completely full of shit.

And I’m one of them.

The myth is repeated. And repeated. And repeated. Hell, I’ve said it several times over the past two days, while driving past a Panera or an Olive Garden or a Taco Bell and shaking my head. “Corporate America,” I say, “has killed off so many of the great independently owned United States restaurants—and it’s a shame!” What I mean, specifically, is that we’ve turned into a strip-mall nation, overtaken by beige structures hosting familiar entities ranging from the Gap to Old Navy to Sports Authority. The hometown business is largely a thing of the past, and it’s sad.

But, eh, is it? Today, in our drive across America, Robyn Furman and I stopped off in Forrest City, Arkansas. It was about 7:30 pm, and we were hungry. A stone’s throw away stood a place called Ole Sawmill Cafe. It looked quaint and cool and local, and when I suggested we dine there, Furman nodded. 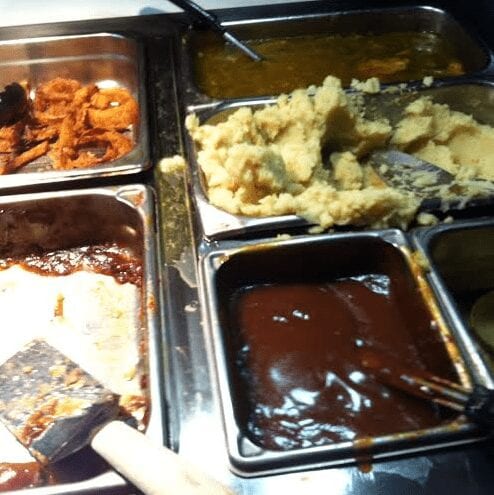 Put different: Let’s get the fuck out of here.

It smelled like an armpit. My armpit. Which, I can tell you, is not pleasurable. The meats seemed to be swimming in fat pools. The vegetables appeared soggy and listless. There were a bunch of tables, and nobody eating seemed to possess an ounce of life. They were going through the motions—fork to mouth, fork down, reload, fork to mouth, fork down, reload …—as if they were extras from Invasion of the Body Snatchers.

We bolted 100 times more quickly than we entered, never to return.

And here’s the thing …

Ten minutes later (after an army of gnats somehow entered my Prius), we pulled up to the McDonald’s drive-thru. And, yeah, it was unhealthy. And, yeah, it was greasy. But it was also predictable. And comfortable. And tasty. There were no armpit stenches or Body Snatchers. It was food we knew, and it filled (and probably ultimately rotted) our innards.

I want to support places like the Ole Sawmill Cafe. I really, really do. They’re regional and romantic and cozy.

Side note: For lunch today we stopped at the famous Loveless Cafe in Nashville. The place is an institution; a local favorite; a tourist attraction that also draws locals. So we pulled up, waited 45 minutes for a table, and … and … and … and—meh. Just, meh. Good, OK, tasty enough. The waiter, dude named Owen, was lovely. But sometimes food truly is overrated and over-hyped.

PrevPreviousIt’s 7:09 am in Wytheville
NextOn Robin Williams and being deadNext