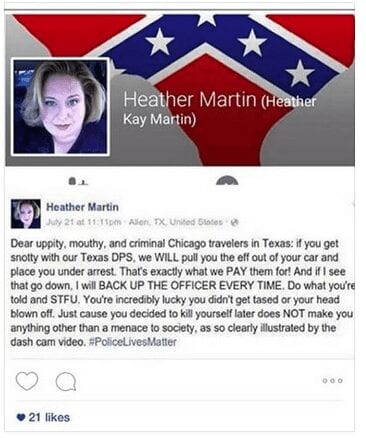 I don’t know you, but someone posted your Facebook status update from July 21.

First, I’d like to offer my congratulations: Your spelling and grammar seem pretty impeccable. Proper usage of “You’re” vs. “Your”; Good application of the colon. Even a neatly placed hashtag to wrap things up. Truly, mazel tov.

That being said, I’d like to kindly request that you please refrain from reinforcing the views most of us in the 49 other states have of Texas. I mean, your Facebook ID backdrop … Really? That’s so Rick Perry. And the ignorant, racist, coded language? Are you trying to make us think you’re a bigot? Or are you unaware of the power of your ignorant, racist, coded language?

I’m actually riveted, Heather, by what could possibly make one write the sentence, “Just cause you decided to kill yourself later does NOT make you anything other than a menace to society, as so clearly illustrated by the dash cam video.” Did you know Sandra Bland? Did you know her family? When you read this article, do you feel the slightest sadness? Empathy? Hurt? Or did she deserve to die, because she was mouthy to an overzealous police officer? Does that make her passing digestible?

Oh, and if someone gets snotty with a police officer, you and yours will “pull you the eff out of your car”? Really? Even though it’s, eh, illegal? You’re OK with that? Legal protections don’t matter to you much? America and all that. You seem, at best, to be a snotty racist asshole. Can I therefore come over to your house and pull you out of your window and place you under arrest? For being rude? For being an asshole? For throwing out hurtful, bigoted speech? That cool with you?

Heather, here’s my request: Spend a few nights in Gary, Indiana. See what it’s like to be black in downtrodden urban America, where all the businesses have left, where the economy long ago died, where cops are itching to make arrests and where a kid has no reason to view college as the slightest possibility. Or visit Newark, N.J. Or Trenton. N.J. Or Compton. Or 100 other places across the country. See what the world is like—what it’s truly like—before you fire off some snotty, ignorant, bullshit message that your little white, poof-haired, arch-conservative, Ted Cruz-loving xenophobic Facebook pals can like with a click on the heart.