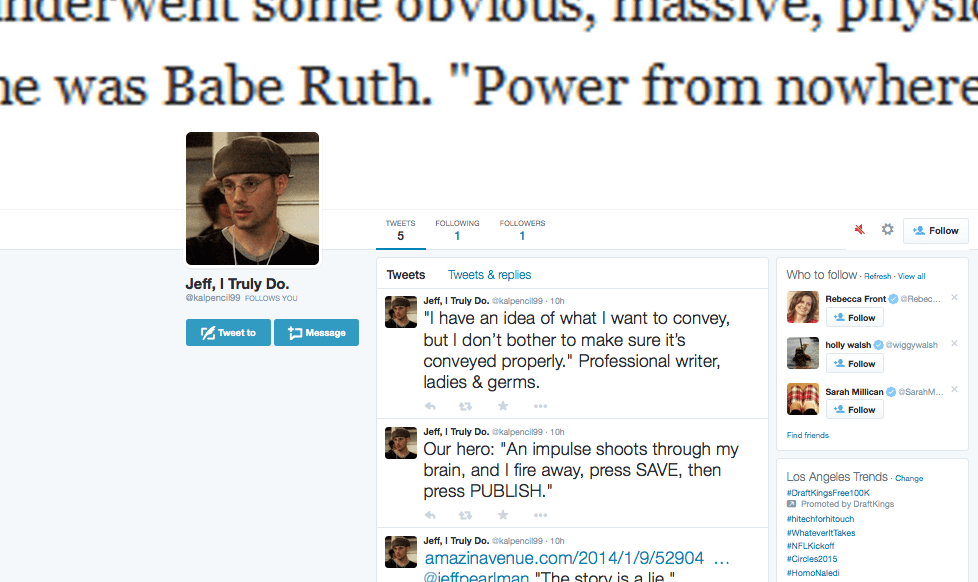 Woke up this morning to a new Twitter follower—me.

Well, not exactly me. But sorta kinda me. It was an account called “Jeff, I Truly Do” and features my photograph, post-the 1999 clubhouse encounter with John Rocker. This Jeff sent out three Tweets. Here, take a look … 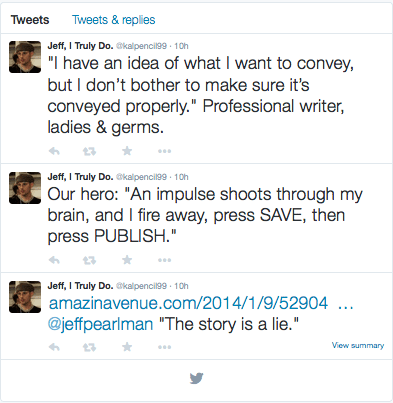 This isn’t actually the first fake Jeff Pearlman account. Back when Sweetness was released in 2011, someone started a Facebook page titled, “Jeff Pearlman is a Cackling Douche”—which was pretty funny (I mean, I certainly am a cackling douche), if not somewhat bizarre. It combined humor and anger, plus a bunch of comments like this …

Wait. I sorta feel like Sean Hannity right now, going on and on about how much people hate me, when what you’re really trying to prove is that people care enough to hate you, thereby loving you. But that’s not the case. I swear. Actually, I wanted to make a few points:

A. Who creates a Jeff Pearlman account? I mean, seriously. I’m probably America’s 56,432nd most famous author. I spend my days in coffee shops. I write about sports. So who the hell takes the time from his/her life (though I’m assuming it’s a him) to find my photo, take a screen shot of it, create a fake Twitter account, upload the picture, upload the back screen (from a passage I wrote) and then Tweet? What sort of person A. Has so much free time? B. Cares so much about America’s 56,432nd most famous author? It makes no sense.

B. This shit backfires. Always. Because it rarely makes people mad. I know not one writer who would be offended by this. Instead, you either laugh or (RE: Hannity) take it as a perverse compliment, because people care enough to waste their time on you.

C. If you want to insult a writer, the best way—always—is to insult his/her writing. That’s the most painful route; cite specific examples of badness. Hell, they’re out there for everyone. Certainly for me. So that’s a much more impactful avenue than, say, looks or baldness or nasal hair or wardrobe.

D. I miss that hat. I really do. I was wearing it to a Dodgers-Giants game in the early 2000s, and it fell off in the tunnel (not unlike Adrian’s red beret did at the end of Rocky). That thing was money. And not money. I think it cost $8 at Marshall’s back in ’96.