One man’s letter to Donald Trump

As many here know, I am in the early stages of researching a book about the USFL, the long-ago professional football league that lasted from 1983 until 1985.

It’s an amazing subject for a biographical sketch, filled with wild characters, awesome helmets, thrilling games, oddball narratives. The league was overloaded with superstars, ranging from Reggie White and Jim Kelly to Steve Young and Herschel Walker. Truly, this has been a joy.

These days, when one Googles “USFL” or “United States Football League,” he almost always finds 1,000,000 references to Donald Trump, the GOP presidential front-runner who owned the New Jersey Generals. In his two years (1984 and 1985) atop the franchise, Trump established himself both as a man unafraid to spend money (he signed, among others, Doug Flutie out of Boston College and swiped a bunch of free agents from the NFL) and, to be blunt, a complete and total asshole.

Trump wasn’t merely disliked by his fellow owners; he was loathed and abhorred and detested. The general take: Here was a selfish bully who desperately craved an NFL franchise, and viewed the USFL as a temporary (and disposable) vehicle toward that end. Trump memorably led the USFL’s suicide march away from a spring season and toward the fall, and (much like now) his big words and loud voice and thuggish tendencies caused many lemming peers to follow.

John Bassett was the owner of the Tampa Bay Bandits, the USFL’s model franchise when it came to professionalism, class, fan inclusiveness. You cannot find anyone who has a bad word to say of Bassett, and he spent nearly eight years of his life courageously fending off cancer in one form or another. When a series of brain tumors were detected in 1984, right in the midst of Trump’s USFL power grab,  his friends, partners, family members, fellow owners were heartbroken.

Bassett, though, wasn’t one for pity or resignation. Even as he underwent radiation, he fought for the USFL, a league he believed in. He watched Trump rant and berate and stomp and scream, and was disgusted by it all. He viewed Trump as classless and narcissistic; all about self. Hence, on Aug. 16, 1984, Bassett fired off the following letter—which has never been published before and includes a threat to punch Trump “in the mouth.” It speaks volumes.

I can’t imagine, were he alive today, what he’d think of it all. 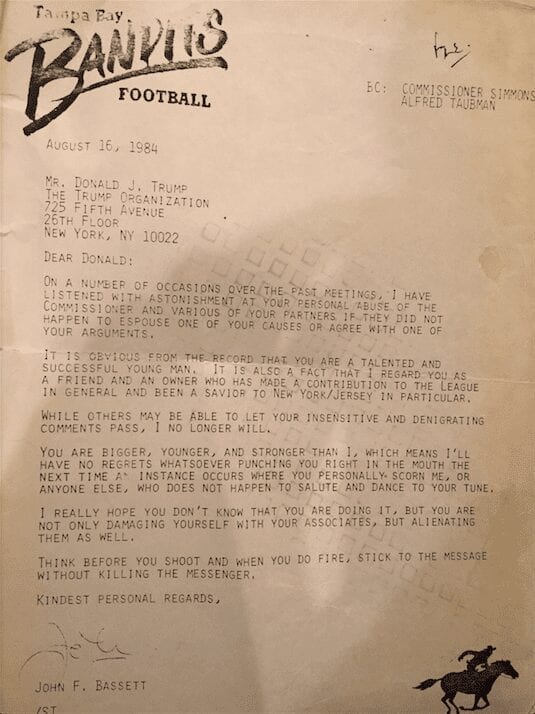