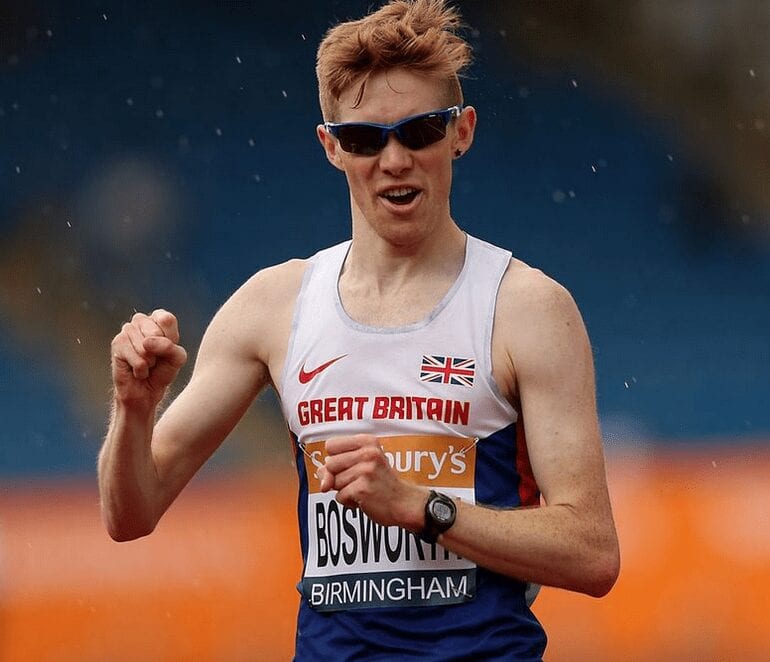 Tom Bosworth is a race walker.

He proposed to his boyfriend on the beach.

Regardless, meet the Quaz with fire behind his shoes and processed meat in his stomach.

JEFF PEARLMAN: Tom, I ran track at the University of Delaware back in the day, and I’ve always been riveted by race walking. Specifically, how one becomes a race walker. I mean, you don’t hear many kids screaming, “Let’s walk! Really fast!” So how did this happen for you?

TOM BOSWORTH: When I was 11 I joined my local athletic’s club, where my sister tried race walking through a friend. So I tried it as well at the age of 12. It was just another athletic’s event to me at this age, which I think if more clubs included race walking this view would become more common. Most people forget that race walking is part of Athletics …

J.P.: During the Olympics you Tweeted, “52 days on the road … and still loving every second of it. I don’t want this experience to end, end!!” Wife and I talking about this at the time, so you’re the perfect guy to ask: When one is done with his/her Olympic events, does he leave the Village? Like, do most athletes hang around until the Games are over? Hang around a few days? Bolt ASAP? Does it feel anticlimactic after your event is completed? Or is it a chance to lather in the joy?

T.B.: Some people head home, due to competitions coming up, or family they want to get back to. Most stay in the village and enjoy the Olympic Games and take the time to relax. I did! I watched some sport, partied with friends and just soaked in the atmosphere. There’s nothing like the Olympics, after all.

J.P.: So while you were at the Olympics you asked your boyfriend to marry you on a beach in Rio. Questions: How long were you planning the proposal? How nervous were you? Did you have some doubt to whether he’d say yes?

T.B.: I planned it for well over a year, I’d been looking at finding the right ring for a long time, as he was very specific over what he wanted. I finally found the right ring and asked Tiffany’s in Heathrow to reserve the ring for me to collect after I flew down from altitude training in Font Romeu in France on my way to Rio. I wasn’t nervous until that very moment and I knew he would say yes as we spoke about moving our lives on together for a while.

J.P.: Last year an American basketball star, Elena Delle Donne, came out—and the news was greeted with an indifferent shrug. You came out publicly a year ago, and you expressed how nerve-wracking it was at the time. I’m wondering: How was the news received in England? Was it what you expected?

T.B.: Here it was a bigger deal than I expected, however, it still was totally positive. A few said that, “This isn’t news,” and I agree it shouldn’t be. However, for those few days it still was in the news. So it shows out sportsmen and women are still a new thing. However, with time I’d hope to see more and more athletes just living openly rather than having to come out.

J.P.: Maybe this is dumb, but are race walkers great runners? What I mean is … could you—if you devoted all your energies to it—run a really kick-ass mile? Could you run a 2:40 marathon? Is there a direct correlation between one’s walking speed and running speed?

T.B.: I think the marathon would be more my thing than the mile. We are incredibly fit athletes, however, the body is trained for race walking so the muscles would be different but the aerobic side of things would be fine. I’d like to run a few 5ks or 10ks in my off season just to see how fast I can go,—after all I can walk 5k in 18:54!

J.P.: You placed sixth in Rio—and I am fascinated by this. Like, on the one hand, you’re an Olympian! You placed sixth among the best of the best, on the biggest stage. That’s amazing. On the other hand, you didn’t medal. And I ask—does that matter? Is the Olympics about being there, more than placing? Were you thrilled? Disappointed? Both? Neither?

T.B.: Firstly, let’s never forget that being an Olympian is the pinnacle of sport. What people don’t realize is that I was ranked 37th. So many have said, “You must be disappointed with sixth.” I said, “Are you crazy? I set a new British 20k record and finished 31 places higher than expected!” In the UK we are used to winning medals but we need to travel along the journey to get there. I’ve done that and now at future world championships and Olympics I can be competing for medals as a favorite.” 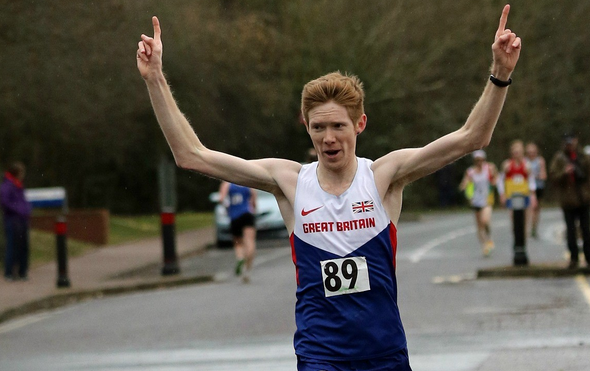 J.P.: Right now things are super weird in America with the rise of our own nutjob, Donald Trump. You’re British, and you’re surrounded right now by the world’s community. How is this whole Trump thing playing elsewhere. Because—Jesus Christ—it’s terrifying.

T.B.: It seems to have become more of a joke for many watching this man conduct himself. Not a single person takes him seriously.

J.P.: Do the Olympics meet the hype? You work four years to get there; sweat, blood, toil, etc. And then it happens. And then it ends very quickly. Is it all worth it? And why or why not?

T.B.: Yes it’s worth it. I can’t explain the buzz around it because there is nothing like it in this world. It can’t last forever because otherwise the buzz would die. I already miss every moment of it. I’m inspired by Team Great Britain’s incredible performance to go out there and smash the next four years once again.

J.P.: You ate 22 Chicken McNuggets in one night. Um … what were you thinking?

T.B.: I’m really not a fan of McDonalds, but after two years without a break or without the chance to just be a normal person and enjoy myself I treated myself to lots of McDonalds in the village, just to eat something different. After all, I knew I’d be back on my strict schedule of maximizing training, eating and sleeping soon enough.

• Ever thought you were about to die in a plane crash? If so, what do you recall?: Yes. Leeds Bradford airport is placed in a very high and exposed to part of the country where winds get incredibly strong. When I looked out the window as we came into land I could see the runway out in front of me and I realized we were coming into land sideways to counter the wind. It was the only time I grabbed the front of the seat in front of me. There were plenty of sighs of relief once we had landed.

• Three memories from your first date?: 1. Being very late—the motorway was closed due to an accident meaning I was nearly 90 minutes late; 2. Pizza—asking questions about one another over a pizza; 3. The hug—at the end of the date, Harry went to shake my hand and I smiled at him and went in for the hug and gave him a kiss. He was such a shy and nervous guy when I first met him.

• Who wins in a boxing match between you and Harry from One Direction? How many rounds does it go?: Harry wins, and it wouldn’t make it past round one. I’m not a fighter at all.

• One question you would ask Jay-Z were he here right now?: Can you race walk? Give it a go, this could make a hilarious video!

• Best joke you know?: Most of my jokes between friends are quite crude, so it’s best I leave it between me and them!

• You do freelance massage work. My lower back is destroyed by disc decay. Can you help?: I could help you to a certain point, but you’d require far more specialized support for it.