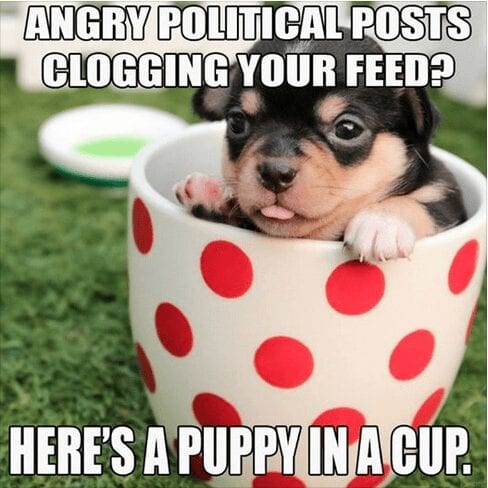 Over the past few days a bunch of Facebook friends who thought Obama to be a Kenyan-born Muslim have complained that the medium no longer brings them joy.

They’re tired of logging onto Facebook and seeing reports of Trump trampling upon First Amendment rights, Trump lying about attendance figures, Trump forcing his spokesperson to make things up, Trump obsessing over wardrobes, Trump being too lazy to read. They’re tired of all the Donald Trump bashing, and—dammit—they want Facebook to return to photos of kids and cats and kids with cats.

Here are some samplings …

No more politics!!! Let’s be happy today! Upload the 16th pic in your phone. No matter what it is. NO CHEATING. Have fun & play along! Then copy and paste this as your status with the number I give you.

I had to dump two people I’ve been friends with for years because of what’s going on the U.S. This hurts my heart. So sad. What happened to decency? Can’t we all be happy?

Well, no. Sorry. No. We can’t all be happy. And, truly, I don’t want to see pictures of your cats. I want to talk about this. I need to talk about this. What you—Mr./Mrs Facebook—did when you supported Donald Trump because he was about to make America great again. What you—Mr/Mrs. Facebook—did when you derided Hillary as a liar and Trump as a truth teller. I need to tell you how I feel. I want you to hear my anger, my fear, my utter disgust in what America has quickly become.

You want kittens? I’ll give you ruined relations between Mexico and the United States, all because our narcissistic president came up with this nonsensical $25 billion wall idea, and declared that our former ally will pay for it (against its will). You want baby photos? I’ll give you a racist attorney general, an inexperienced HUD director, an EPA leader who, literally, does not believe in the EPA.

I get it—you’re starting to realize Donald Trump doesn’t belong in the White House, and it’s a painful truth. But it’s your truth, and I want you to own it.

This is your new reality. And it’s self-inflicted.