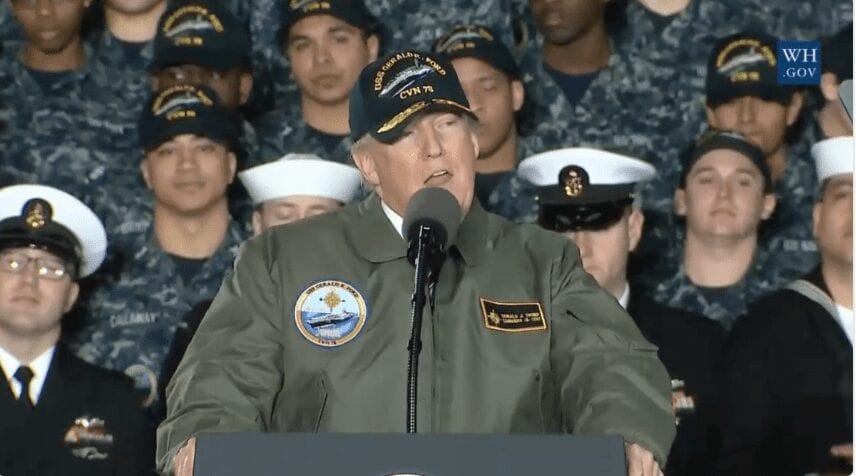 Back when I was a kid, I loved dressing up as a superhero.

My friends and I would make our own costumes from paper and tape and fabric. With imagination and some sparse materials, little Jeffrey Pearlman could transform from snot-dripping kid to Batman or Superman or Spiderman. I’d jump around the house, leap over ditches, save heroines from burning buildings.

Then my mom would call me to do my homework. And that was that.

In case you missed this, earlier today Donald J. Trump played dress-up. This is the same man who, in 1968, used a wittle footsie injury (specifically: bone spurs in his heels) to receive a deferment. Coincidentally, this was when America  was undertaking enormous troop deployments to Asia, inducting about 300,000 men into the armed forces. Wrote Steve Eder and Dave Phillips in the New York Times: ” For many years, Mr. Trump, 70, has also asserted that it was “ultimately” the luck of a high draft lottery number — rather than the medical deferment — that kept him out of the war. But his Selective Service records, obtained from the National Archives, suggest otherwise. Mr. Trump had been medically exempted for more than a year when the draft lottery began in December 1969, well before he received what he has described as his “phenomenal” draft number. Because of his medical exemption, his lottery number would have been irrelevant, said Richard Flahavan, a spokesman for the Selective Service System, who has worked for the agency for three decades.”

In other words, Donald Trump didn’t want to go to Vietnam.

Which, of course, doesn’t make him an isolated figure in politics. For every John McCain or Beau Biden, there are dozens of elected officials who either dodged serving or simply didn’t exist during the draft. Bill Clinton is probably the most famous of the avoid-serving-at-any-costs success stories, and members of the armed services rightly viewed him suspiciously.

What makes Trump unique, however, is that while he failed to serve, he talks as if he did. Everything is about winning; fighting; destroying. Yes, he looked the fool dressed in his greens today. But he sounded like an aspiring Grant or Schwarzkopf. Which is just … pathetic. It reminded me of George W. Bush announcing Mission Accomplished in his flight suit—only Bush had something resembling a human heart.

But he seems anxious to destroy.