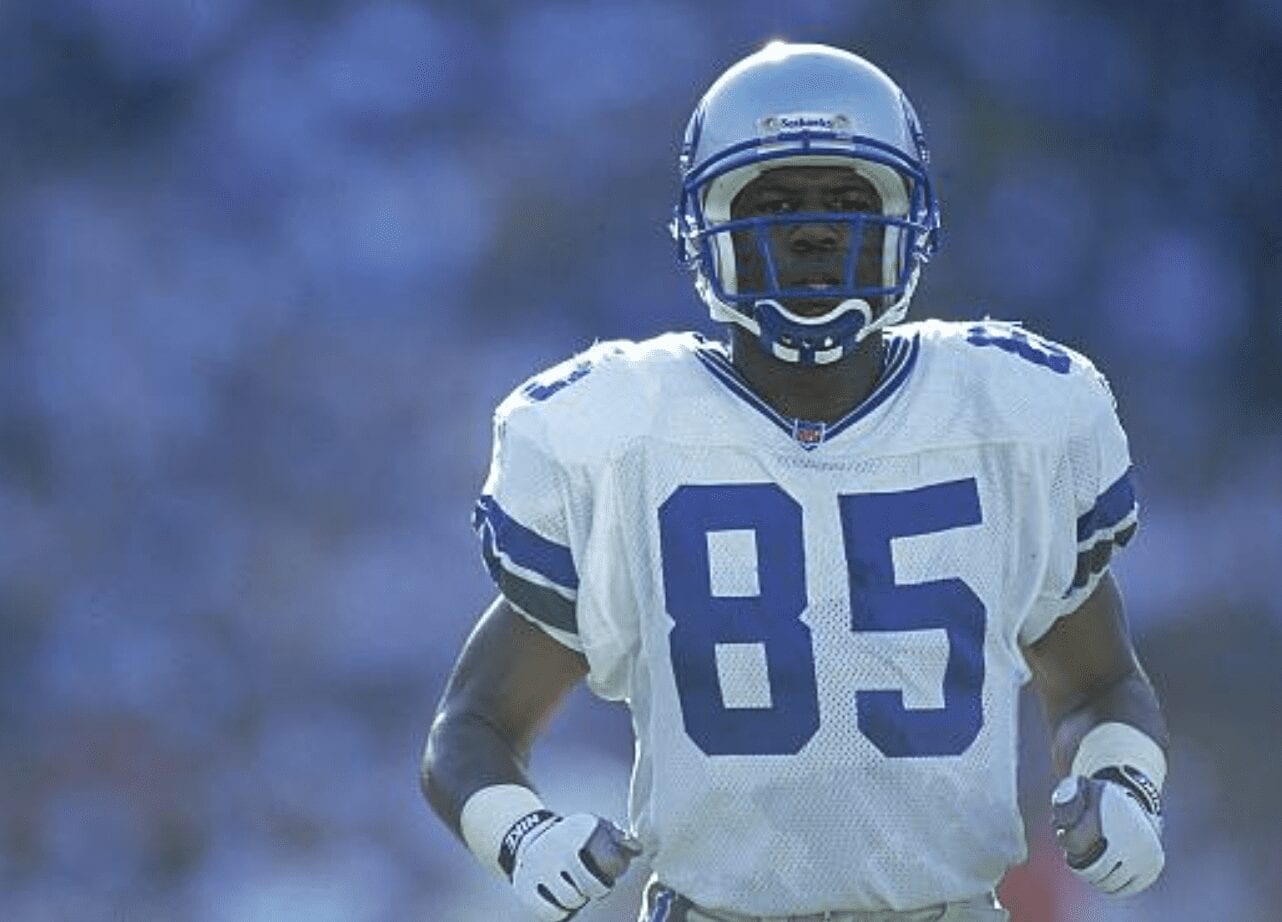 If you think about it, athletic fame—even at the highest level—is preposterously fleeting. One day you’re a star, enjoying free meals, absorbing the cheers of 60,000 fans, signing autographs and entering a room to stares and gasps.

The next day, you’re one of us again.

In the course of his nine-year NFL run, Mike Pritchard was no ordinary player. Beginning in 1991, when he was a first-round pick of the Atlanta Falcons, and concluding with the Seahawks in 1999, Mike caught 422 balls, which ties Bobby Joe Conrad, Jay Novacek and Bob Tucker for 198th on the NFL’s all-time list. And while you may think, “Whoa, 198th. Big whoops,” … well, where do you rank?

The point: Mike Pritchard was a player. Fast, Shifty. Tough. He survived longer than most and produced more than most. Which makes him both a man with a thick resume and a guy who can talk openly, freely about a world of experiences (aka: a very worthy Quaz Q&A).

These days Mike lives in Las Vegas, where he serves as co-host of the Mitch & Pritch Show on ESPN Radio. One can follow him on Twitter here.

JEFF PEARLMAN: So Mike, you’re 47—at the age where a lot of former NFL players really start feeling the impact of their athletic career. So … how does having been a football player physically affect your day-to-day life? Do you have pains? Aches? Limitations? And how much do you worry about either a mental or physical slide due to football?

MIKE PRITCHARD: I was a slot receiver most of my career which meant going across the middle a lot. Considering my collisions were against linebackers and safeties I thought I would be in horrible shape right now. I’m actually happy that just my left knee reminds me of football. The constant pain and swelling is annoying but I can still be active. I lacerated my kidney while playing with the Broncos. I was able to play several years after that incident and so far it hasn’t affected my day to day life.

J.P.: Along those lines, I’ve often seen interviews with retired players, and they can barely walk, or their memory is terrible, or they need a new knee or hip or heart valve or whatever. And yet, they usually say, “I wouldn’t change a thing.” I don’t get that. Like, at all—the trading of health for glory. Can you explain …

M.P.: I’m pretty positive that i would change my knee, back pain and a lacerated kidney if I just played for glory. What kept me on the field despite the dangers was the desire to compete. It just so happens that I was pretty good with competing on the field. Maybe winning a national championship at the University of Colorado back in 1990 had some influence as well. Now I compete with my mind. 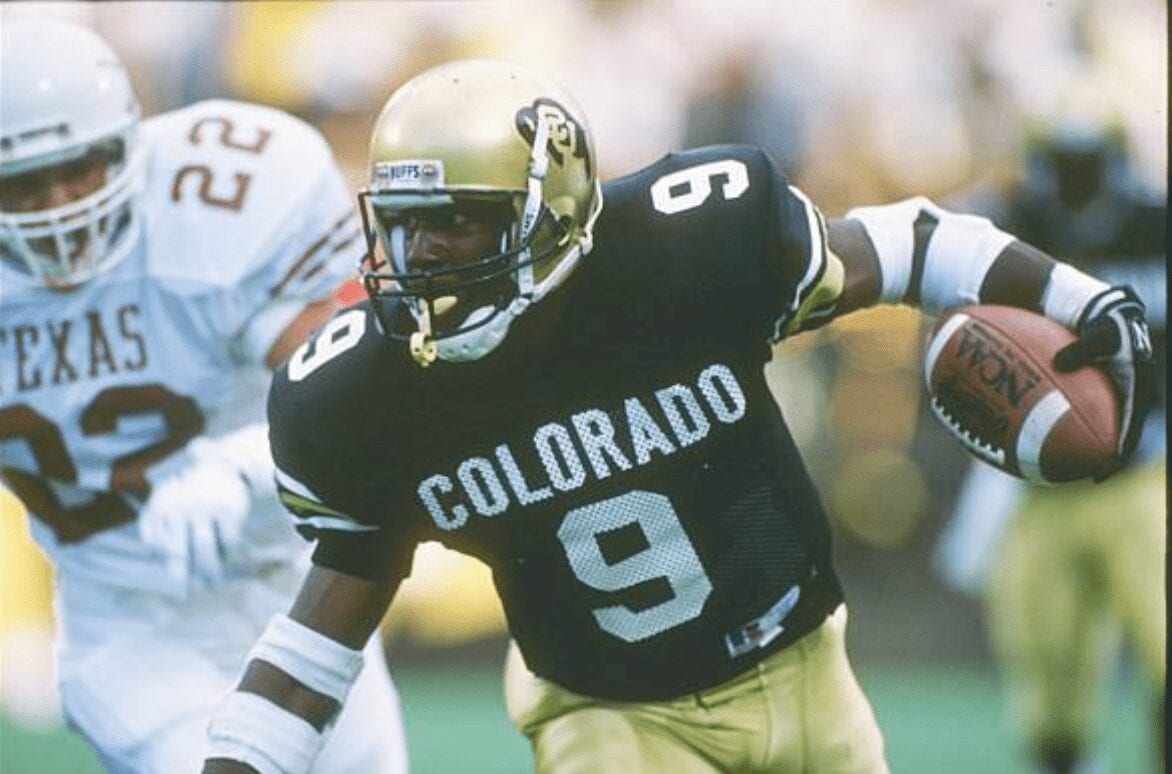 J.P.: You came along a little before we absolutely nitpicked over every measurement a football player offered; before we raved over 4.43 speed but bemoaned 4.5 speed; before we decided a guy would become legend because he jumped really high in his underwear. So I wonder—do you think football scouting has gone too far? Do we overthink this stuff? Or is there truly an importance of a receiver running 4.34 on an indoor track, as opposed to 4.4?

M.P.: Great question. I think nitpicking can help when used for discovery. That was the case with me and I will explain. If you evaluate talent for a living obviously you use what works for you. If 4.34 vs. 4.4 or benching 225 18 times instead of 16 has lead to a pretty good player you will probably use these parameters again (copycat league, Jeff). For me, the league thought I could play but needed to find out more prior to the draft. My performance during the NFL Combine validated what evaluators initially thought and confirmed to them that I belonged in their league.

M.P.: Playing in the NFL totally exceeded expectations. I had no comparisons either. My dad was a career Air Force serviceman and my brother followed in his footsteps. I knew I wanted to go to college but I didn’t have one dream of playing in the NFL. I was a fan and admired the great players but honestly I didn’t have an NFL-or-bust mentality. When I arrived on the scene as a rookie with the Atlanta Falcons it was like a whole new world just opened up to me and I wanted to stay in it. I was willing to work hard and sacrifice more because of 1) the championship in college and 2) this new world of professional sports and what it could provide. So in the end, yes the experience was worth it.

J.P.: You were a first-round pick of the Atlanta Falcons in 1991. The team took Brett Favre in the second round—and the pairing didn’t work. You were there; you caught passes from him. Who was the young Favre? Could he have excelled in Atlanta?

M.P.: The young Brett Favre threw three touchdown  passes to me during the first preseason game of the 1991 season. Brett was immensely talented but not refined. He just needed coaching and a positive NFL influence. The 1991 Atlanta Falcons organization had talent as well, but we did not have a winning culture. If the culture was different I absolutely believe Brett would have excelled. Brett felt early on that he had something to prove. Competing with a chip on his shoulder drove Brett to the Hall of Fame.

J.P.: You were traded from the Falcons to the Broncos in 1994, at a time when there weren’t a ton of NFL trades. So … what does it feel like to be traded? Does one feel for wanted (by the new team) or unwanted (by the old)? How did you find out about it? How did you accept the information?

M.P.: The NFL was weird back then. We just started to experience free agency. The money started to flood in as well. My agent had positioned us perfectly with a three-year contract and I was designated a restricted free agent. Also, the Falcons had fired Jerry Glanville as the head coach and was naming June Jones the new head coach. I wanted to stay in Atlanta but at the same time all of our talent was walking out the door.

The Broncos contacted my agent and wanted to see if there was interest in playing back in Colorado with John Elway. I said “Hell, yeah!” and the trade came about. The trade was a win/win for me—Atlanta was going through a transition and Denver had John Elway. If I didn’t lacerate my kidney during the first year in Denver I believe it would have been a special year. 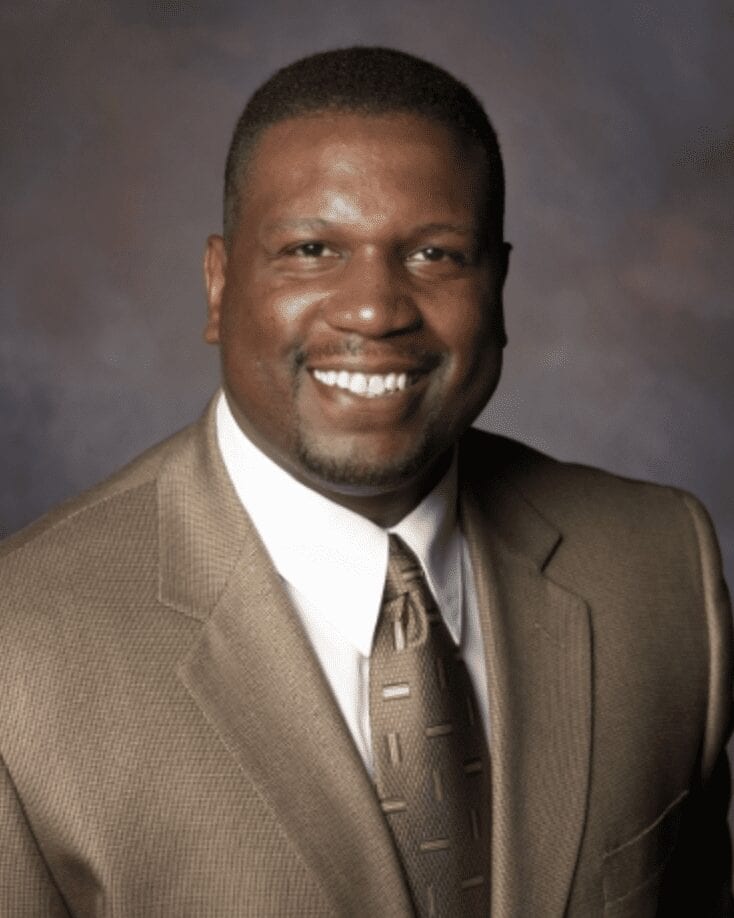 J.P.: Your final NFL season came in 1999, when you caught 26 passes with the Seahawks. How did you know you were done? Could you tell physical changes? Recovery changes? Were you accepting of the end of your career? Was it hard to digest?

M.P.: Jeff, my career was loaded with mishaps. The trade to Denver started with a lot of promise, as I was at the top of the AFC in receptions before the kidney incident. In 1999 Seattle hired Mike Holmgren as its head coach. I had a tremendous offseason which led to a new contract from Seattle and Coach Holmgren targeting me with the flanker receiver position (think Jerry Rice and Antonio Freeman). Needless to say i was ecstatic.

During fall training camp a rookie wide receiver ran into my left knee and I tore my lateral meniscus cartilage. The MRI revealed a slight tear but when the surgeon went inside he found more significant damage. After the surgery I was informed that my left knee was now without cartilage. Jeff, it was instant arthritis. My Jerry Rice role disappeared and so did any more years on my career. If it wasn’t for Toradol injections i wouldn’t have caught those 26 passes. I was accepting of the end of my career because the pain was too much to handle.

J.P.: As I age I become more and more skeptical about all things college football. It just seems like this big meat factory, where (oftentimes) young African-American men from urban areas are plucked out of poverty by wealthy white men, offered promises of NFL fame, given unrealistic educational expectations (maintain a 2.5 while also practicing 40 hours per week—and traveling on weekends). Yes, there are many successes. But there are MANY heartbreaking stories, too. Mike, am I off here?

M.P.: Jeff, you are spot on. Young African-American men are promised the world especially if they can help a professional coach win games and secure his position. I think the art of recruiting has been lost with the elevation of head coaching salaries in college football. When I was recruited all that was promised to me was that I would have a chance at an education and that I would be able to compete against the best teams in college football. There was no promise that Colorado would help me get to the NFL. I was accepting of that and was fine with it. Today’s head coaches are making incredible sums of money, which leads to jaded promises and even more cheating all for the sake of the university’s bottom line.

Last I checked tuition, enrollment and conference TV contracts are up. Jeff, I do believe there is a bubble in college football (debt levels of Michigan and California athletic programs). It will be interesting to see what happens down the road. 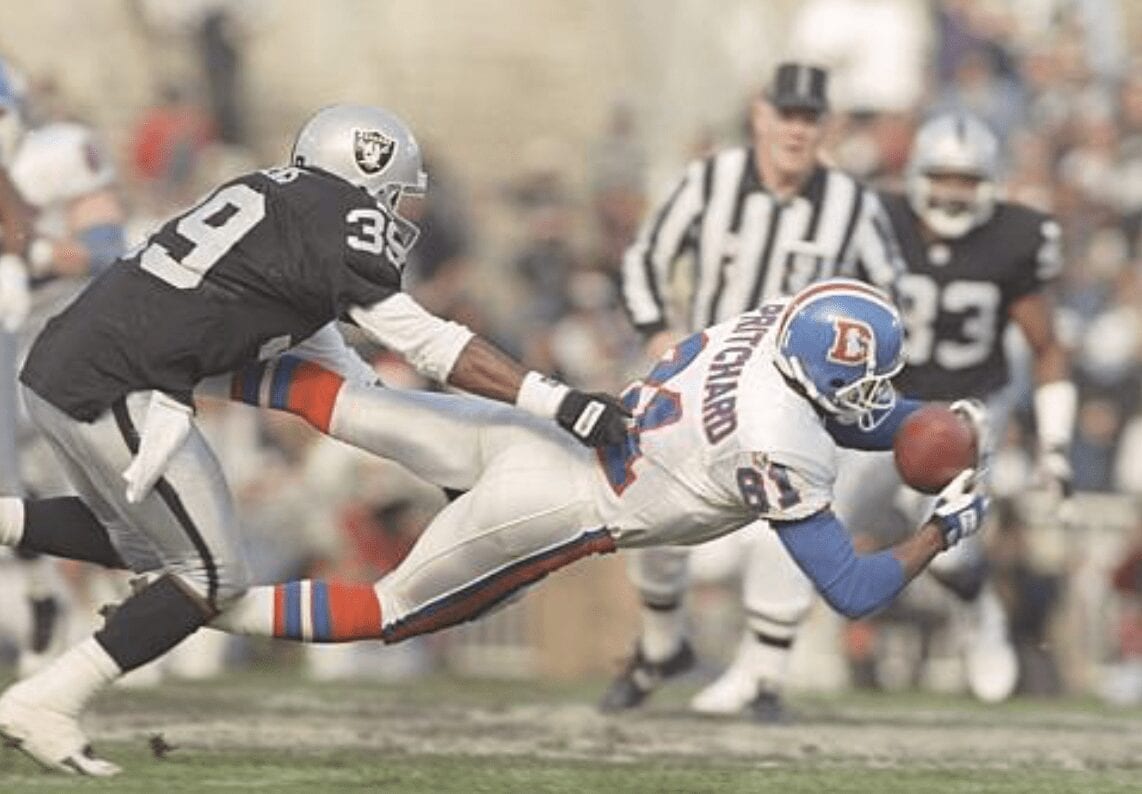 J.P.: How does it feel to be a member of the media, having been covered for so long? Was it weird at first? Offputting? Do you still think of yourself first and foremost as a retired athlete, or as a radio host? And does your experience on the field truly help you as an observer?

M.P.: Jeff, my media experience has had its moments. I always had interest. During my career I had media opportunities with TV and radio. My goal is to broadcast games (color analyst) nationally. I have broadcasted Arena League and college football for the past 15 years but mostly for local and regional areas.

Sports talk radio has been an eye opener. I thought that egos only existed in professional sports. Man, was i mistaken. I still feel like a player performing in the media as opposed to a member of the media. I don’t want to insult journalism or a journalist by claiming to be a member of the media. It’s more fun to remain coachable. I have found that my experience on the field helps me to provide perspective and has been entertaining as well.

J.P.: Do you ever get bored of sports? It’s been your life for so long—are you ever like, “Ugh, if I never see another Browns-Jets game I’d be America’s happiest human”?

M.P.: Honestly, I didn’t get bored of sports until I started doing a sports talk show. How funny is that?

• Ever thought you were about to die in a plane crash? If so, what do you recall?: Never had that thought. We had to dump fuel once but I always believed we would land safely.

• Is Pete Rose inducted into the Hall of Fame within the next two decades?: Yes, right after sports betting is legalized in the United States.

• The world needs to know, what was it like playing with Itula Mili?: LOL … it was an honor. From what i remember Mili was a quiet player trying to find his way in the league

• We give you one start in an NFL game right now, what’s your statistical line?: 9 catches for 163 yards and 2 TD’s

• Reality TV calls—they want you to race Chris Hinton, Bobby Hebert, Marisa Tomei and an alligator in a pool of vanilla pudding. Winner gets $500,000. You in?: No. Two reasons … one, alligator and two, I can’t swim.