My debut as a flag football coach

This is going to sound sorta dumb, but today I made my debut as a flag football coach for my son’s team of 11-year olds … and I was nervous.

I guess, technically, I was the interim coach, because Chris—the awesome guy who volunteered to lead the 49ers—was away on business, and he needed me to fill in. But either way, I was running the show, and it made me oddly uncomfortable. First, while I’ve spent multiple seasons as a Little League Baseball and youth basketball coach, I’ve never done much with football, a sport that can actually be more befuddling than one might think. Second, I just didn’t wanna screw things up, and have our team (which entered 0-2) get demoralized and destroyed. Third, I didn’t wanna freeze.

That’s actually the big one. Freezing. For some reason I had this recurring awake nightmare in my head—we’re in the huddle, I’m surrounded by six kids and I have nary a clue what to do next. That would be bad.

The game ended an hour ago—and it was a friggin’ blast. First, we won 19-12. But, truly, the score is the least-interesting part of the endeavor. We could have won or we could have lost, and this would still go down as one of the most joyful brief spans of my life.

Why? Let me count the reasons …

• 1. I got funky: I was looking over designed plays and looking over designed plays and, well, it just all seemed really dull. So last night I sat down with Emmett, my terrific son, and we created some new ones. There were two things I really wanted to try. A. Snapping the ball to a halfback, then having the halfback immediately hand it to the quarterback. B. The Deep I formation.

A. In NFL Flag, which is a six on six league, a quarterback can’t run. So when an opposing team blitzes, your QB is a sitting duck. He/she can roll left and roll right, twist and twirl, but you’re not allowed to cross the line. So I like the immediate handoff, where the quarterback (technically the halfback) is given the ball, and now has the run/pass option. Emmett and I designed these: 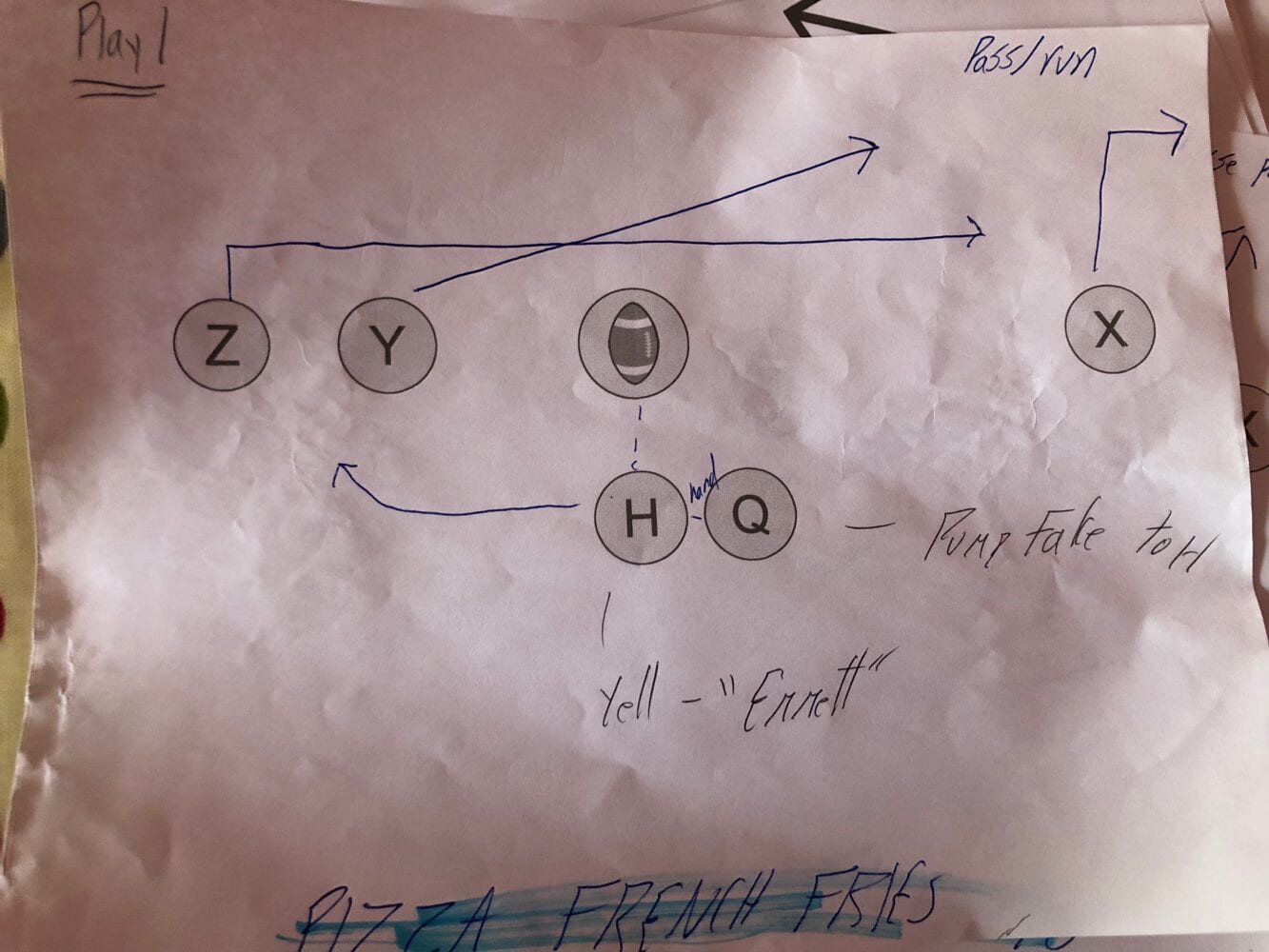 B. I’m going through final edits of my USFL book, which means a lot of Herschel Walker running the I at the University of Georgia, then with the New Jersey Generals. Now, the idea of an I in flag might seem sorta … odd. But … well … um … I’m odd.

So I introduced this:

When I went over it with the players during warmups, they seemed a bit, eh, confused. And unenthused. But then, second play from scrimmage, we ran it. And it worked. The defenders were at a loss. So we ran it again. And it worked again. It looked something like this, and both the ref and the opposing coaches were genuinely entertained/bewildered.

• 2. Emmett played quarterback: So last year Emmett’s team went 0-8, and my kid was quarterback nearly the entire time. He was sorta shoehorned into the gig, and after initial nervousness really came to enjoy it. This year we had a different quarterback start the first two games, and he’s genuinely excellent. But, today, he was away on spring break. So Emmett made his return. And he played great. It’s a real friggin’ thrill, watching your kid run the offense, drop back to pass, spin to hand off. Also—and this is a bit of a humble dad brag—Emmett thinks better than he throws. What I mean is, he’s merely a solid athlete with above-average sports comprehension skills. So, in a league that calls for few bombs but a ton of short-to-medium range passes, with multiple options, he can think-think-think-decide, and be fantastic.

• 3. The opposing team: We played the Eagles. They weren’t great. But they were g-r-e-a-t. The coaches were these two fun guys who didn’t take things overly serious. The players were eager, engaged, enjoyable. It makes ALL the difference in the world. When you coach against jackasses, it ruins everything. There’s one team in this league, for example, that outfits all the players with NFL-esque wrist bands with all the plays listed in small type. And, in a way, I get it. Be like the pros and all that nonsense. But we’re playing a game. With kids. It’s always nice when both teams understand such. Changes the entire mojo.

• 4. The kids had so much fun: It was very lighthearted. Jokes in the huddle, interactions between players, nicknames. At one point we ran a sweep to our Flash-like halfback, and back in the huddle I said, “You know what my grandma used to say? If something works, do it again.” They all chuckled—and we ran it again. Also, all the plays had names—none of which had anything to do with football. For example, this morning I was digging through a backpack and I found, oddly, a piece of paper with 98 written in black bold. So Emmett and I named our trick play “The 98.”

And it even worked. 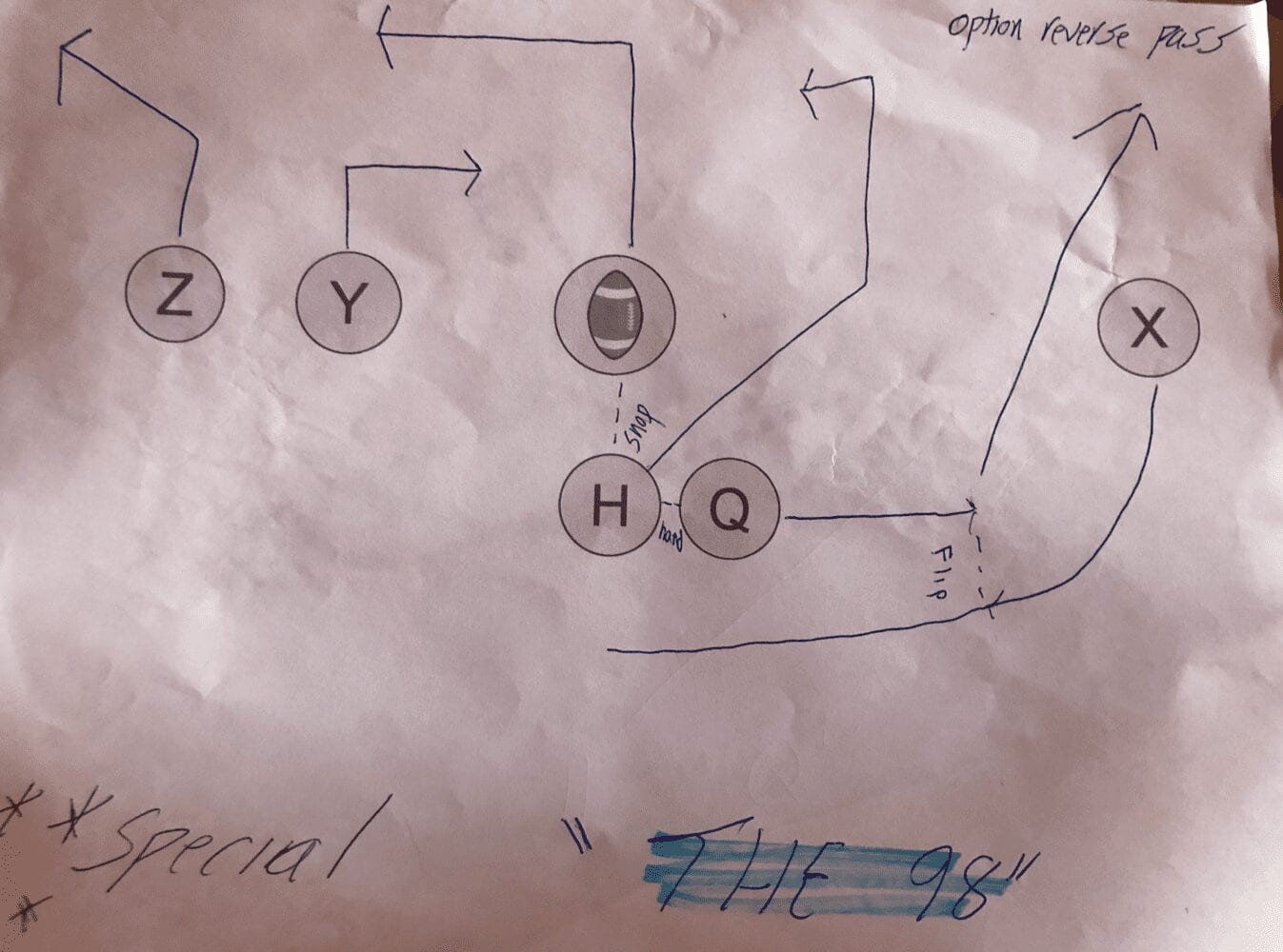 Anyhow, it was all too much fun.

Which is the point of sports, right?

PrevPreviousThe making of a Two Writers Slinging Yang promo
Next“Dad, do you know what this song is about?”Next