My dad read my USFL book

My dad’s name is Stanley Pearlman.

He grew up in Brooklyn, and played no sports. He wasn’t a Brooklyn Dodgers fan. He didn’t like the New York Giants. He has no stories of going to Madison Square Garden to watch Willis Reed. Once, when I was a kid, he won a T-shirt in our local synagogue’s bowling tournament. It was the giveaway for placing last.

I bring all this up not to mock my dear father, but to praise him.

Somehow, despite being the offspring of Stan and Joan Pearlman, I grew up loving sports. Nearly all sports. Boxing. Football. Baseball. Basketball. Track and field. I was the kid who dug into Sport and Sports Illustrated; who knew Dave Winfield’s stats by heart; who sat before the television, mitt on hand, mimicking the throws of Rafael Santana and Wally Backman.

My dad, meanwhile, would observe sports only if I promised to scratch his back.

But here’s the thing. The amazing thing. Over the past month my dad has been texting me updates from “Football for a Buck,” my upcoming USFL book—which he read cover to cover. Stuff like this … 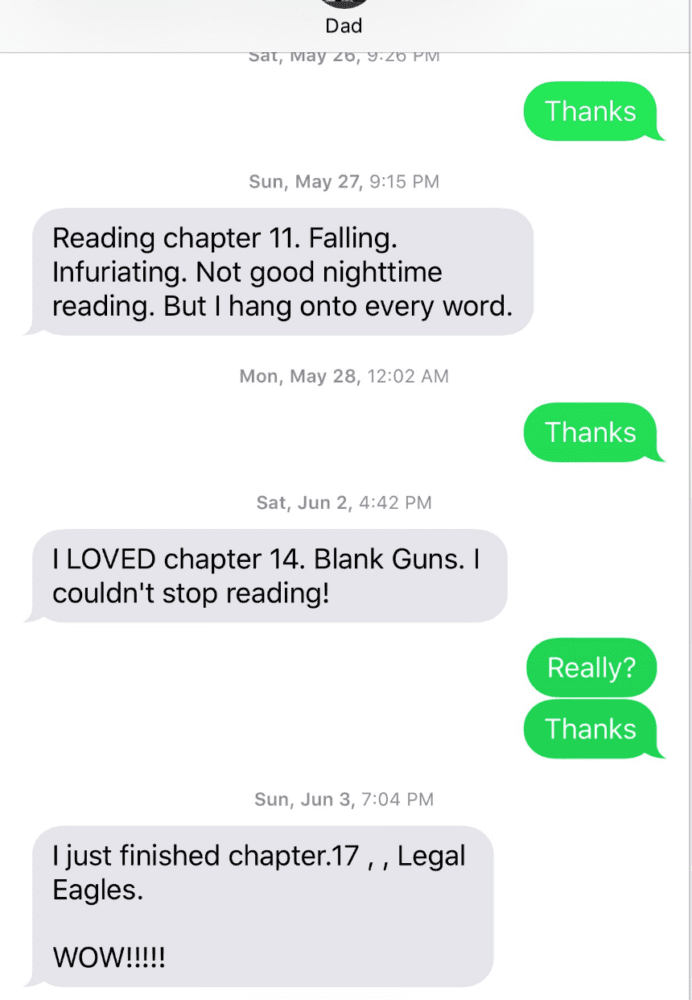 And, truly, I can’t tell you how amazing this is. “Football for a Buck” is my eighth book, and Dad has read them all. And, again, he doesn’t … give … two … shits … about … sports. Doesn’t care. Wouldn’t be excited for Reggie Jackson to appear at his local picnic, because he wouldn’t recognize Reggie Jackson. Doesn’t know Sam Darnold and Carmelo Anthony walk the earth. Phil Jackson? Larry Brown? Jeremy Lin? Wesley Walker? The Ball Family? No and no and no and no and no.

But he’s always been my biggest supporter and booster. Quick with kind words. Quick with sage advice. Critical when it’s needed, but without being harsh or destructive. This dates back to my childhood, when I’d read my parents high school newspaper articles, and they’d (at least pretend to) listen. Support has never been hard to come by in this family. Never ever.

So, truly, happy Father’s Day to my best reader and my role model.

PrevPreviousIs it so wrong that I urinated into a Dunkin’ Donuts cup?
NextI’ve now seen everythingNext